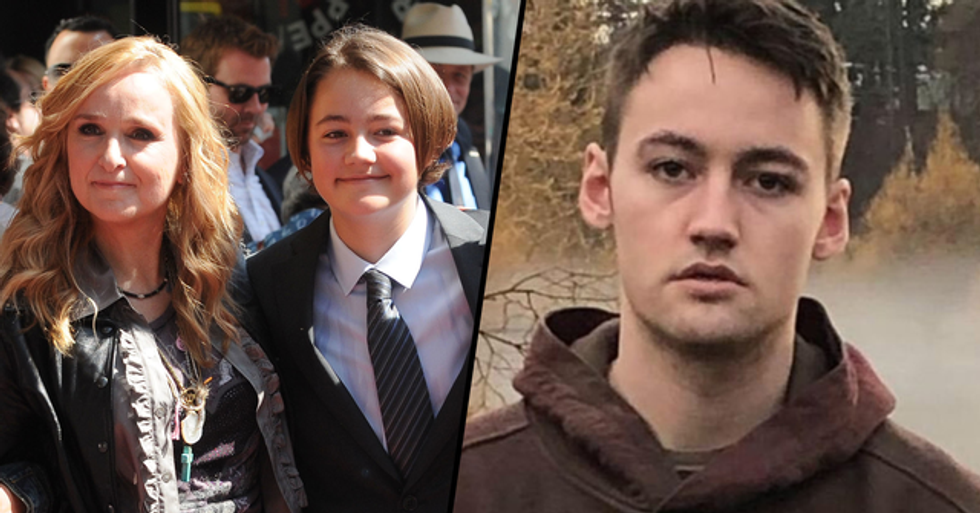 Today, the news broke that Beckett Cypher, the twenty-one-year-old son of musician, Melissa Etheridge, has sadly passed away.

Tributes have been flooding in and, now, Melissa has confirmed her son's shocking cause of death.

Melissa Etheridge is well known for her raspy, smoky vocals...

Her debut album Melissa Etheridge was released in 1988 and became the starting point of her success.

The album peaked at number twenty-two on the Billboard 200!

Its lead single, "Bring Me Some Water", garnered Etheridge her first Grammy Award nomination for the female category of Best Rock Vocal Performance. Which is no mean feat.

In 1993, she won her first Grammy award for the single "Ain't It Heavy" from her third album, Never Enough.

Which people think prompted her coming out in January of the same year. She has been a gay and lesbian activist ever since.

Before Etheridge came out, there were rumors circulating around her sexuality but after releasing Never Enough, which was considered a more personal and mature album from Etheridge at that time it seemed to inadvertently address these rumors.

Later that same year she released her breakthrough album Yes I Am.

Its tracks I'm the Only One and Come to My Window both reached the top 30 in the United States, and the latter earned Etheridge her second Grammy award.

But it hasn't always been plain sailing for the star...

In October 2004, Etheridge was diagnosed with breast cancer and underwent surgery and chemotherapy.

Which forced her to make a brave decision...

At the 2005 Grammy Awards, she returned to the stage and, while bald from chemotherapy, performed a tribute to Janis Joplin with the song "Piece of My Heart".

She has received fifteen Grammy Award nominations throughout her career, winning two, in 1993 and 1995.

In 2007, she won an Academy Award for Best Original Song for I Need to Wake Up from the film An Inconvenient Truth.

In September 2011, Etheridge received a star on the Hollywood Walk of Fame.

But where did it all start?

Etheridge was discovered in a bar called Vermie's in Pasadena, California. She had made some friends on a women's soccer team, and those new friends came to see her play.

One of the women was Karla Leopold, whose husband, Bill Leopold, was a manager in the music business.

Karla convinced Bill to see Etheridge perform live. He was impressed and became a pivotal part of Etheridge's career.

Etheridge met her future wife, Julie Cypher in 1988 during a video shoot, and later had two children — their daughter Bailey and son Beckett.

This caused some speculation over who was the sperm donor for their children. In 2000, the couple revealed it was fellow musician David Crosby.

The pair had previously discussed their arrangement during a TV interview in 2000.

"I do not believe that my children will be wanting in any way because they didn’t have a father in the home every single day," Etheridge said. "What they have in the home is two loving parents. I think that puts them ahead of the game."

While the then-couple was vacationing in Hawaii, they met up with Crosby and his wife Jan.

And began discussing their want to have children, but they had a dilemma as to whom to have as a sperm donor. “And Jan said, ‘What about David?’" Which sparked the whole idea.

Crosby told Rolling Stone he didn’t hesitate at his wife’s proposition that he be the donor.

“Melissa and Julie are good people," he said. “Nice set of values, they’re funnier than shit, and they’ve got courage. All rare stuff. You could see that they were in love with each other."

Etheridge and Cypher split up later in 2000, but they continued to co-parent.

But, in recent years, their son, Beckett, had been struggling with addiction.

For years, Beckett had been battling with opioid abuse.

An opioid is a drug that acts on parts of the brain and body, called opioid receptors which help to moderate sensations such as pain, mood, appetite, and various bodily functions.

A multitude of drugs fall under the opioid bracket.

Here in America, we are currently experiencing an opioid crisis, with over 400,000 deaths being linked to the drugs over the past 2 decades.

But now, his battle is over.

On Wednesday, it was confirmed that the twenty-one-year-old had sadly passed away.

His heartbroken mom released a statement overnight on her tragic loss.

The star said her son had struggled with opioid abuse and said that Beckett had "succumbed" to his addiction this week.

Everyone was shocked by the announcement...

Etheridge broke her silence on Wednesday night after announcing the shocking cause of his death on Twitter.

The fifty-eight-year-old confirmed that her son had died as a result of his addiction.

We’re sad to inform you that Melissa’s son Beckett passed away and there will not be a Concerts From Home show today. - #TeamME
— Melissa Etheridge (@Melissa Etheridge)1589403784.0

"Today I joined the hundreds of thousands of families who have lost loved ones to opioid addiction. My son Beckett, who was just 21, struggled to overcome his addiction and finally succumbed to it today. He will be missed by those who loved him, his family and friends."

Etheridge added: "My heart is broken. I am grateful for those who have reached out with condolences and I feel their love and sincere grief. We struggle with what else we could have done to save him, and in the end we know he is out of the pain now. I will sing again, soon. It has always healed me."

The tributes have been flooding in...

And former addicts have been sending their condolences while urging those who are struggling with addiction to seek help.

Too many people have been taken from us too soon this year.