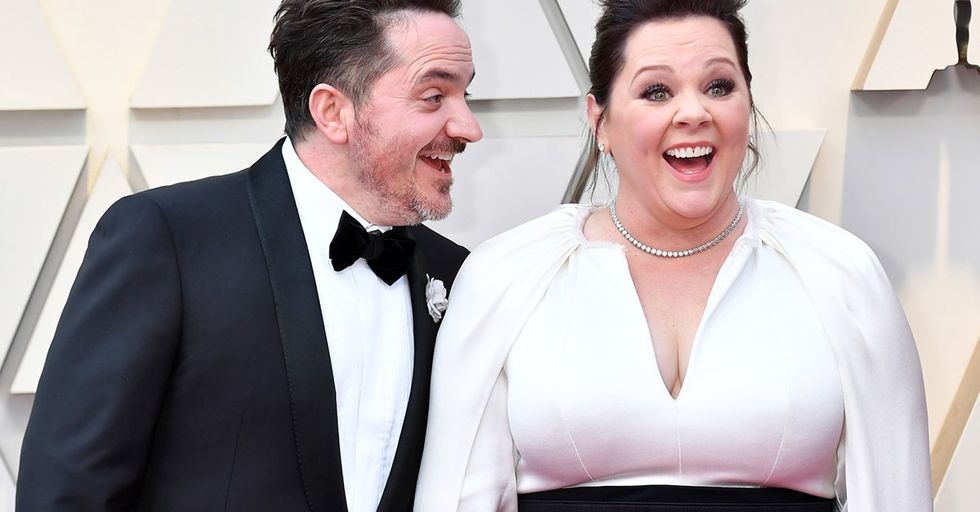 Yesterday, the Oscars award show dominated social media. Of course, we were all clamoring to see who won awards, but there's more to the evening than that! And as always, the red carpet looks were a show all their own.

There's plenty to talk about when it comes to Oscars fashion, so let's narrow it down. Did you happen to keep an eye on Melissa McCarthy last night? Because basically, Melissa McCarthy was a one-woman fashion show the whole time, and people loved every minute of it.

Now, people can't stop talking about her post-Oscars look at the Vanity Fair Oscar Party. She and her husband had the most adorable couples' party outfits! But that wasn't the only fashion victory McCarthy wore! So check out every fashion-stage of Melissa McCarthy's Oscars night.

The Oscar-nominated actress and funny lady has been making her mark in Hollywood for decades, and there's really no show or film that isn't made better by her presence!

Of course, she attended the 2019 Academy Awards.

And people are still talking about her jaw-dropping looks from throughout the night.

It's Melissa's red carpet look, a glorious pantsuit-cape combo. She looks like the superhero of comedy!

And by the looks of it, the pair had a grand ol' time together!

McCarthy was nominated for an Oscar.

Though the award went to Olivia Colman, Melissa was nominated in the category of Best Actress.

It was her second Academy Award nomination.

McCarthy was nominated for her role in the film Can You Ever Forgive Me?

And people were loving the pantsuit.

Pshh, who are we kidding? She rocks that cape WAY better than any lackey of the Empire.

Jokes aside, did you know this about McCarthy?

Yep, Melissa McCarthy studied fashion design at the Southern Illinois University, and then in New York, at the Fashion Institute of Technology.

And now that we know her background, it's really no surprise that McCarthy is a fashion designer and VERY snappy dresser!

Just one of the many moods that Melissa McCarthy evoked last night! She also had audiences in stitches, and here's why...

And there was a new, interesting twist in fashion at the awards show.

After decades of adhering to traditional fashion standards, we're starting to see some real diversity in what people wear. It's so refreshing!

Because she was also a presenter at the Oscars, for the Costume Design category, and she BROUGHT IT with her own costume!

Here's the full footage from her presentation:

Melissa McCarthy and Brian Tyree Henry announce the award for Best Costume Design in some costumes of their own.… https://t.co/rJFSG4vbq3
— ABC News (@ABC News)1551058399.0

We didn't need to be reminded of how funny McCarthy is, but nevertheless, we got this! And it's pretty great.

She turned even more heads in the bunny outfit.

Yeah, she kinda stole the show with that one.

BTW, here's a full look at that train:

SO. MANY. BUNNIES. I hope the person who had to buy a bunch of stuffed rabbit toys had fun that day!

You don't take away the costume design category when you can get Melissa McCarthy in a frilly bunny gown out of it!

Whether or not she won the Oscar, she had already won the whole show.

Also, kudos to Brian Tyree Henry for being a delightful skit partner.

And apparently, the crazy costumes were Melissa's idea.

Because of course they were! She was a master puppeteer with that rabbit.

Queue a close-up of the puppet...

So cute. So expressive. So very, very funny to watch!

Because in a truly iconic move, McCarthy and Falcone showed up to the Vanity Fair afterparty in identical Adidas tracksuits.

The sheer awesomeness had people shook.

Because you just know everyone else in tight-fitting, tailored suits and dresses (plus high heels in some cases!) was super jealous when Melissa McCarthy and Ben Falcone strutted in.

Yet another example of couple goals.

I want a love like Melissa McCarthy and Ben Falcone wearing matching adidas tracksuits to the oscars after party https://t.co/d6RfuQLLcd
— the gogurt burglar (@the gogurt burglar)1551123970.0

Find you tracksuit soulmate, guys. We all just want someone to be comfy and confident with.

Can we talk about these pictures with Amy Adams?

Look, Melissa's buddy-cop comedy with Sandra Bullock (The Heat) was hilarious. There's no reason to suggest that a buddy-something comedy with Amy Adams wouldn't also be great!

That's McCarthy and Adams in the middle of a dance showdown on the Vanity Fair dance floor. Oh, to be in the same room as something that epic.

And she's actually got more diamonds on now than with her Oscars suit! With comfort, you can afford some extra bling.

McCarthy and Falcone may have looked a little dressed down compared to everyone else, but in every picture, they look super happy and everyone else looks impressed with the fashion choice!

Here's a clip of their bold arrival.

Everyone calm down, they’re air marshals: Melissa McCarthy and her husband Ben Falcone arrived to the #VanityFair… https://t.co/S2anMrYJet
— Variety (@Variety)1551119020.0

And they look ready to party hard!

And McCarthy has become goals for many women.

Melissa McCarthy in a tracksuit at the Vanity Fair afterparty is all I aspire to in life (📸 Justin Bishop) https://t.co/uULiXdCcRQ
— Sacha Judd (@Sacha Judd)1551092403.0

I mean, she was already a pretty great role model, but it never hurts to get those bonus tracksuit points.

Honestly... I'd be into it. Melissa McCarthy's rabbit and Jason Momoa's pink scrunchie are internet icons now, right? Share this Oscar night awesomeness with your friends!