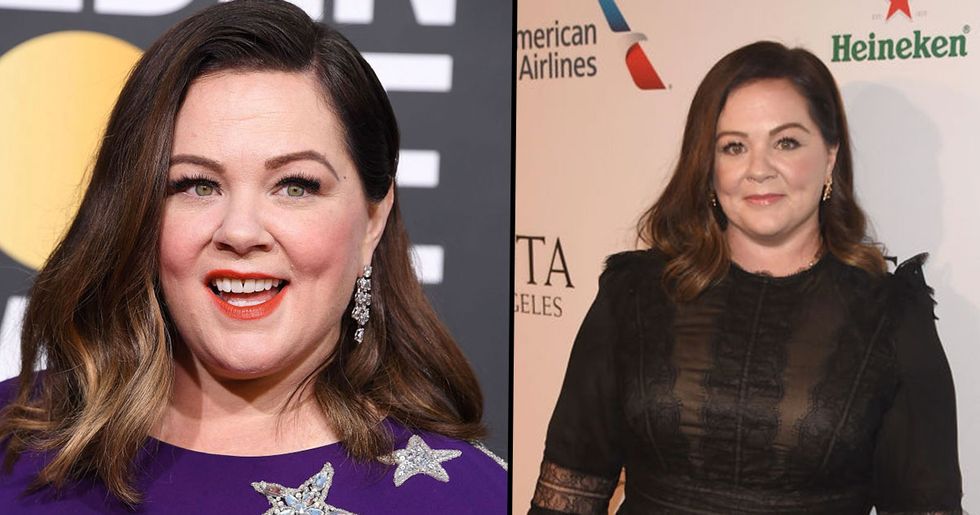 Many of us think of awards ceremonies as something extremely glamorous. But that stars have revealed that there is one caveat to the swanky events. Because of the televised speeches, dinner tends to be served super early, to avoid too much noise during the actual awards. This means that stars can often end up going hungry as the night goes on.

Melissa McCarthy seems to be on a one-woman mission to stop this from happening. The Bridesmaids star took matters into her own hands this year. Instead of just carrying lipstick in her purse, the actress somehow smuggled in thirty sandwiches. Reports state they were of the ham and cheese variety, and it seems like the attendees of the Golden Globes were very grateful to McCarthy for her forethought. In fact, McCarthy's sandwiches may actually have been the star of the show!

For those who are out of the loop, the Golden Globes happened on Sunday.

The annual awards show celebrates excellence in film and television - the Freddie Mercury biopic Bohemian Rhapsody was one of the big winners this year.

One of the stars in attendance was Melissa McCarthy.

McCarthy is best known as an actress, but also has writer, producer, comedian and fashion designer on her extensive resumé.

One of her most famous films is The Heat.

In it, she plays a foul-mouthed, rough-and-ready Boston detective alongside an uptight Sandra Bullock to hilarious effect.

This female-centric comedy was a huge success, and catapulted McCarthy into becoming a household name.

On top of her spectacular comedy acting. McCarthy also seems to have a heart of gold.

According to Insider, McCarthy was concerned about guests going hungry at the Golden Globes award ceremony. FYI - to avoid potential clinking of cutlery during speeches, the dinner is always served extremely early on in proceedings.

To counter any potential rumbling tummies, McCarthy had a sneaky plan.

She decided to smuggle in thirty sandwiches to give out to anyone in need of a snack throughout the evening.

The sandwiches reportedly came from Joan's on Third.

The artisanal L.A. bakers is famous for their delicious sandwiches. McCarthy apparently plumped for an apricot-glazed ham and brie concoction in a crispy ciabatta roll.

A quick browse of Joan's on Thrid's Instagram makes it clear McCarthy made a good choice.

Their feed is filled with mouthwatering baked goods, from breads, to cakes and desserts. These chocolate cupcakes looked particularly tempting.

Our food envy is pretty intense.

Is it bad we want to be invited to the Golden Globes purely in the hopes of getting a McCarthy sandwich?

It seems we aren't alone.

According to McCarthy's husband, Ben Falcone, they brought forty sandwiches and left with just two. It seems her assertion that the stars would be getting peckish was entirely correct!

TV editor Mark Malkin was among the eager recipients.

He accepted one of the sandwiches from McCarthy - and gave it a "really good" review.

This is one of our favourite Golden Globes stories.

There's just something so great about the idea of Hollywood's rich and famous elite chowing down on some ham sandwiches.

Of course, there was another benefit to the snacks.

Olivia Colman, who won a Golden Globe for her performance in The Favourite, pointed out the main reason she was glad to have a late-night sandwich.

The flowing drinks plus early dinner could have had some disastrous consequences.

Luckily, McCarthy's filling treats helped line everyone's stomach and prevent anyone from getting too tipsy.

Everyone loves sandwiches, and the idea of handing them out at an exclusive, elite event is just amazing. Everyone needs a friend like Melissa McCarthy.

It seems the stars were extremely grateful.

According to Variety, Rachel Brosnahan commented that she usually brings power bars to the event to stop her getting too hungry, but had forgotten this year. "How did she get them in here?" Jessica Chastain wondered. "But," she admitted, "It's a good idea."

Some people had questions, though.

Is it really possible to "smuggle" thirty giant sandwiches anywhere? Or was the act a little more brazen than that?

When you think about it, it's unlikely the sandwiches could have been much of a secret.

Although the way McCarthy got those sandwiches in isn't really important. What is important is the fact she did it.

It was a stellar night for Melissa McCarthy.

Melissa McCarthy may not have won her category tonight, but she did hand out thirty ham sandwiches she snuck into t… https://t.co/yogInIcG7O
— Kay Taylor Rea (@Kay Taylor Rea)1546836719.0

Not only did she make everyone's evening with her secret sandwiches, but she looked totally fabulous while doing it.

Looking this great didn't happen without work, though.

McCarthy shared a collage on her Instagram of her extensive getting ready process. The snaps include her in a terrifying sheet mask, and is captioned "It takes a village".

Her long purple dress, designed by Reem Acra, stood out from the crowd thanks to its purple hue and silver sequin stars.

Some people weren't so keen.

The dress certainly had a slightly cartoonish aesthetic, and was reminiscent of a wizard's robe - although everyone agreed her hair and makeup was flawless.

We think she looks amazing.

Though her dress may not be to everyone's taste, we applaud her for going for something a little more unusual. Plus, it seems to be the perfect place to hide a sandwich or two!

Though her dress had a mixed reception, the sandwiches were a universal hit.

Although McCarthy didn't win any Golden Globes at the ceremony, it's clear that the sandwich smuggling was a winning act in the eyes of the attendees and the general public.

Some pointed out the huge kindness of the act.

I just love this gal. Theres no two pays to put it.. shes just the cats meow of true kindness and heart https://t.co/4IUJuZHrbt
— Darbles_marbles (@Darbles_marbles)1546876065.0

While smuggling sandwiches is pretty funny, the idea behind it is actually super sweet. McCarthy was concerned about her fellow actors, and through pure generosity wanted to make sure they had the best possible evening.

McCarthy was glad her sandwiches were a success. "I've been handing them out to everyone," she proudly declared. She also promised an even better snack option for next year's Golden Globes.

Although they might be a little to messy to chow down on while wearing the finest designer clothing. Perhaps sandwiches may be the best way to go?

Here's McCarthy on the red carpet.

She looks every inch the consummate professional - although there isn't a sandwich in sight!

It looks like she had a ball with her husband.

This image of the pair having a pre-ceremony drink in their car is absolute relationship goals.

Melissa McCarthy, we salute you.

And we hope no celebrity ever has to endure an awards ceremony without your generosity. Now, who's hungry?