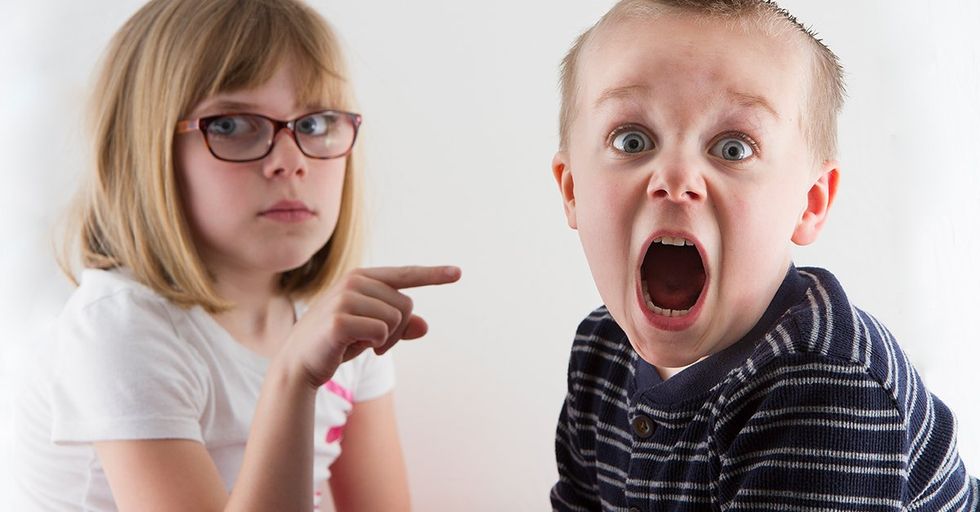 No one knows you as well as your siblings do.

Of course, no one annoys you quite as much, either.

If you have siblings, you get it.

Here are 19 memes that will only make sense if you grew up having to share bedrooms, bathrooms, clothes, and everything in between...

And then your mom would get mad at you calling her at work. Somehow, you'd be the one to get in trouble even though you were doing absolutely nothing wrong. Go figure.

If you're an only child, you might need an explanation for this one.

See, one sibling has control over the TV remote and wants to change the channel. The other is enjoying what's on TV and is therefore trying to cover the remote sensor. Get it now?

There is nothing more satisfying than coming up with the greatest comeback in the heat of the moment. Nothing, I tell you. And now for another classic sibling trope: taking things way too literally...

Not exactly what I meant.

Leave it to your siblings to misinterpret your directions in the most inconvenient way possible. They just have a knack for it.

Say goodbye to those pudding cups.

Amateur. Everyone knows you're supposed to hide your snacks in two different places.

If I had a nickel for every time my siblings pulled this hilarious "joke" on me... Well, I'd probably have enough to buy a slice of pizza.

There's no panic like the panic that sets in after you accidentally hurt your sibling.

They always have the best stuff.

And, of course, you have to master the innocent poker face when they ask you whether you've seen their charger anywhere. This next sibling has a brilliant way to keep anyone from stealing their stuff...

Why is it that older sisters always have the better clothes? It's just a fact of life.

Why have you betrayed me?

I thought I could trust you. You will pay for this.

Your parents pretend not to have favorites...

...But you all know what's up. I'm gonna go out on a limb here and guess that the brother is the baby of the family.

Probably because you know that no matter what, you're stuck with your siblings for your whole life. Plus they have all kinds of dirt on you. It's best to keep them on your good side.

Not only that, but they come in handy when you're desperate:

If you're lucky, they'll also bring you a clean towel if you forgot to grab one when you went to take a shower. OK, here's one more meme that perfectly captures what happens when somebody gets hurt...

Everything is going to be fine. Maybe.

The most tense moments of an older sibling's life are the ones spent between hitting their sibling and waiting to see how their sibling is going to react.

Oldest gets shotgun. Every time.

They try to stare straight ahead as though the entire universe has not fallen into the Upside-Down. The worst is when your mom tells you to "just get in the back."

Thanks for the labels, but...

...I don't think there's an older sibling alive who needed them. That behavior has "younger sibling" written all over it.

If you listen closely, you can hear a sibling saying "I'm not touching you!" in the distance. Share this list with your siblings who drive you crazy (even though you still love them anyway)!