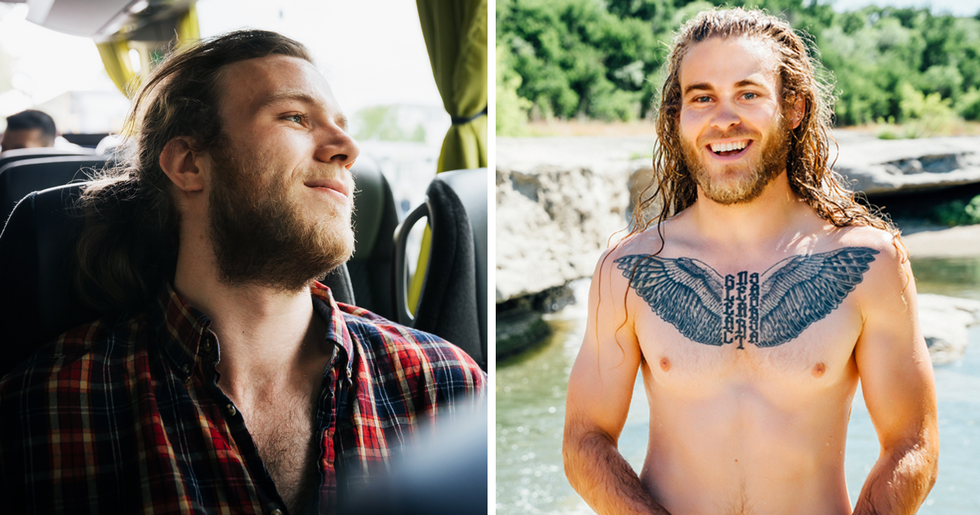 Do you know what's interesting? The human body. No one really knows why we have certain body parts, like say, testicles.

So, we're going to have a nice, long, mature chat about them, but first, let's start with a joke.

Do you know what they say about men with big feet?

Well, scientifically speaking, nothing. Long hair and fertile facial follicles, on the other hand, may suggest tiny testicles. According to a new study into primate anatomy, scientists have found that the males tend to make a hereditary choice between a thick mane, or big testicles.

Because apparently, you can’t have both. The trend is present in most primate species including our own and the testicle sizes range from tennis balls to peppercorns.

Keep on reading to find out more.

Do you have flowing locks or a wizardly beard?

Well, your hair follicles might be compensating for something.

Science has found that…

'Men with long hair and beards may have smaller testicles than those who struggle to grow facial hair.’

This comes from studying primates.

Testicle sizes in primates come in a vast range of sizes.

The biggest set of testicles belong to an exceedingly small primate.

The northern giant mouse lemur (Mirza zaza) of Madagascar is known to have the largest set in accordance with its size.

But they can hit such low notes?

Apparently, the more you show, the smaller your set is likely to be.

Research by the University of Western Australia found that a male 'can be well-adorned or well-endowed but it's hard to be both'.

This hereditary dilemma comes from a genetic choice primate, males must take when it comes to attracting a mate.

Turns out, it takes energy to either grow fertile follicles or large testicles.

Both coming in handy when attracting a mate, and primates have to channel their energy into one or the other.

Men with long hair and beards are less likely to have large testicles.

The important question then is, which would you rather have?

Probably, our attributes in society should hold more value than our long hair or large testicles. Or, is that just me?

‘Bright butts’ is also a trade-off for primates.

According to an article published concerning the study, many primates choose between the bright butts of a baboon or the large gonads of ‘plainer primates’.

According to primatologist and study co-author Dr Cyril Grueter:

'Some [primate] species sport flamboyant accoutrements such as beards, manes, capes and cheek flanges, and various shades of colour in their faces and fur.’

Yes, apparently you can’t be both.

How large was the study?

The study looked at over 100 primate species... so, pretty big.

According to the study, the animals with the largest testicles sported genitals the size of tennis balls and the smallest were around the size of peppercorns.

Though it must be noted…

That testicle size varies widely according to different populations.

It’s all down to that age-old question.

But not all of them can get what they want.

They have to weigh up their options.

You want to be the best equipped to be genetically successful in the rat-race of life, but you have limited energy.

'Well, next to simply fighting, they can produce so-called 'badges of status'; showy ornaments that help their bearers control access to females by intimidating other males.’

The sperm is mightier than the sword.

'And if males cannot keep others off their females, they can win by producing a lot of sperm to swamp those from their rivals.’

Ever wondered why balls are on the outside?

It would seem more efficient for them to be on the inside, better protected and not always getting in the way when sitting down or crossing one’s legs.

Sperm is optimally produced at 35 degrees celsius, which is two degrees under the temperature maintained in the body.

Unlike the brain and kidneys, who like it hot.

Your brain, for instance, needs a higher temperature to function - so it’s shielded by bone.

But there’s a disagreement.

Scientists can’t agree on the reason as to why the testicles are on the outside.

It’s definitely a temperature thing but is it causation or correlation.

What came first, the temperature or the testicle?

Did the testicles evolve to become external organs because of the temperature needed to produce sperm? Or, did they evolve to perform at that temperature because they were external?

This is what science can’t quite decide.

Dates back to 1890, when it was originated at the University of Cambridge.

It sparked some nasty experiments on dogs.

Scientist Joseph Griffiths experimented on dogs, by stitching the testicles into their abdomens.

After a few weeks like this, the testicles showed severe signs of deterioration.

The study was then picked up.

In Chicago during the 1920s, where it long forward.

Though Elephants discredit the hypothesis.

Elephants have testicles on the inside and have a higher core temperature. Which somewhat discredits the hypothesis that sperm is best produced at a lower temperature.