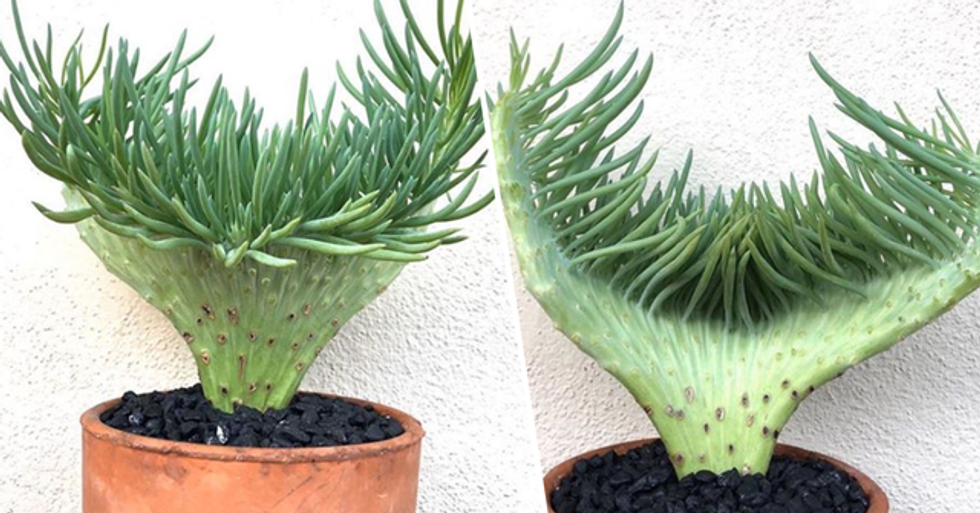 Mermaid Tail Succulents Are a Thing and They’re Absolutely Magical

As all avid botanists out there will know, succulents are perhaps the most magical and mesmerizing plants out there. But now, one type, in particular, has been brought to our attention, and it looks exactly like something from under the sea...

They have evolved to survive and withstand harsh conditions, they can go for prolonged periods of time without water, they're easy to care for, and there are thousands of beautiful varieties of the plant. Keep scrolling to see some of the most amazing ones...

There is a rare type of succulent that has transparent, fleshy skin. Native to South Africa, this type of succulent grows in clusters with soft, fleshy leaves that are clear at the top. Like most succulents, they don't require a lot of upkeep. Just make sure not to over-water them!

It says it on the tin - Known in the botany world as Greenovia Dodrentalis, these beautiful succulents grow in curved layers that resemble little green roses.

Scientifically known as Monilaria Moniliforme, this type of succulent eventually branches into a large shrub of around 6 inches tall - But, when it first sprouts, it appears to have tiny, fuzzy bunny ears.

A plant that wouldn't look out of place on a sci-fi movie set, the trachyandra is an unusual type of succulent that is characterized for it's alienesque structure.

Nicknamed "spiral grass" and "frizzle sizzle plant", the albuca plant is known and loved for it's unique spiralized leaves, all which coil up from the bulb and grow in a spring shape.

Lithops, more commonly known as "living rock plants" or "pebble plants" are unusual rock-like succulents. Am I the only one who thinks they resemble human brains?

Similarly to the rose succulent, the echeveria grows in a manner that leaves it resembling a flower.

Known amongst botanists as the Conophytum Bilobum, this succulent is small, stemless, and resembles a pebble... Or a love heart, to some.

A part of the cacti family, the euphorbia is a large flowering succulent that makes the perfect house plant.

Native to Mexico, the aztekium is a genus of cacti and is characterized by its star-like, Aztec shape and exterior.

This South African succulent is known for its large purple flowers, that have long thin hairs designed to attract and trap flies. But some people compare this plant to the Stranger Things monster, the Demogorgon. Would you have this in your bedroom?

This exotic succulent, which requires a little more water and sunlight than your typical succulent, is often compared to thick mango peel.

Don't worry if you can't pronounce this one, folks. Typically found in the Western Cape of Africa, this succulent is known and loved for it's unusual leaves, that sprout erratically in a wavy fashion from the bulb.

Sometimes known as a "string of dolphins", this succulent is known for, you guessed it, resembling a pod of leaping dolphins. Can you see it? It took me a while, I have to admit...

The Orbea Variegata gets its nickname from its unique spotted flowers, which resemble some pretty mesmerizing starfish.

The conophytum pageae is an unusual little succulent that is known best for having a tiny little smile... It's adorable, isn't it?

This majestic succulent can grow to be 6 feet tall, and develops a large, mushroom cloud-like trunk.

The Gentiana urnula is one of the most difficult succulents to get a hold of - The layered plated leaves and low growth habit of the little plant makes it an interesting stand out for succulent collectors.

The String of Pearls Succulent.

The perfect plant for balconies, the Senecio rowleyanus has become well-loved over the years for its beautifully cascading vines.

This unusual plant, known to botanists as Crassula Umbella, is a fascinating succulent with erect, unbranched stems and leaves fused into a round, wine glass-like structure.

This is an unusual succulent adaptation, and it looks like something you'd find in the depths of the ocean than in your own living room.

And, perhaps the most mesmirizing of them all...

The Mermaid Tail Succulent. This magical plant—officially known as a Crested Senecio Vitalis—resembles a mermaid tail thanks to it growing outwards, instead of towards a light source like most plants do.

It is a truly remarkable looking plant.

It usually grows between 1 to 2 feet high and can reach a width of 3 to 5 feet, making it resemble the tail of a mermaid (or a whale, for the more realistic folk out there).

This plant will truly stand out in your garden...

And it's pink, green, and blue hues will truly give it that magical, under-the-sea effect.

But I know what you're thinking...

Surely, a plant this magnificent will be a complete nightmare to maintain, right?

The Crested Senecio Vitalis is native to the cape of South Africa, which means that it grows in the winter and is dormant in the summer, unlike most other succulents. This means that it is incredibly easy to take care of, with low water and maintenance needs.

It grows in the sun or light shade...

And it tends to prefer sand or well-drained soil, though it can survive long and dry periods, which makes it the perfect match for a more forgetful gardener.

Succulents are pretty magical, aren't they?

For more on the mesmerizing world of plants, keep scrolling to read about the orchids that resemble tiny monkeys...