The posters are a rip off of the artist Barbara Kruger, an American conceptual artist and collagist. | 22 Words 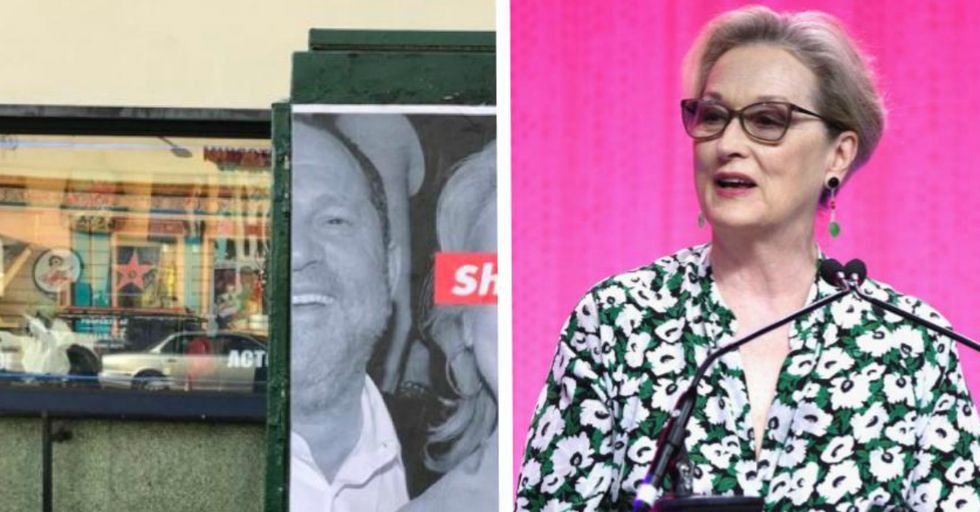 Three-time Oscar-winning actress Meryl Streep is no stranger to making headlines. But it's not always just in regards to her acting career. Remember that time President Trump called her "overrated"  in a tweet because of her Golden Globes speech? Yeah, we're trying to forget that moment too.

But Streep now finds herself in the center of the news again, but this time as the target of a campaign that reads "She Knew." The posters suggest that Streep knew about the Harvey Weinstein allegations and despite that, continued working with him.

The posters began popping up this week in Los Angeles, including near where Streep lives.

The posters feature a photograph of Streep posing with Weinstein, with the words "She Knew" across her eyes. The posters appeared near Streep's Pasadena home as well as near the 20th Century Fox studio lot and the Screen Actors Guild building.

The posters are a rip off of the artist Barbara Kruger, an American conceptual artist and collagist.

The guerrilla poster campaign follows Streep coming under fire from actress Rose McGowan in a series of tweets. “Actresses, like Meryl Streep, who happily worked for The Pig Monster, are wearing black @GoldenGlobes in a silent protest. YOUR SILENCE is THE problem," tweeted McGowan.

"It hurt to be attacked by Rose McGowan in banner headlines this weekend, but I want to let her know I did not know about Weinstein’s crimes, not in the 90s when he attacked her, or through subsequent decades when he proceeded to attack others," Streep said. Streep further explained that she wasn't deliberately silent.

"I am truly sorry she sees me as an adversary, because we are both, together with all the women in our business, standing in defiance of the same implacable foe: a status quo that wants so badly to return to the bad old days, the old ways where women were used, abused and refused entry into the decision-making, top levels of the industry," Streep continued to say in her statement. Streep pointed out that Weinstein needed her much more than she needed him, and he needed her to not know about the accusations.

A lot of people don't agree with Streep coming under fire.

It's also interesting to note that Streep is the person being targeted by the campaign, instead of someone like...say, Matt Damon, whose recent comments regarding sexual harassment are nothing short of ludicrous. Keep reading to find out what people think of the campaign...

As one Twitter user pointed out, "Women are not responsible for men's bad behavior. Men are."

It's unclear who created the posters, though their intent is very obvious. They don't believe the statement Streep gave.

While plenty of people retweeted McGowan's tweet regarding Streep, not everyone agreed.

Actress Amber Tamblyn addressed McGowan's tweet with one of her own, explaining she does "not support any woman (or man) shaming or taunting the movements of other women who are trying to create change." She explained she's good friends with McGowan and actually had a long conversation on the phone with her and the issues she had with what McGowan had stated.

But, again, it all comes down to the fact that the issue really isn't about Streep.

@THR Does anybody else find this extremely counterproductive and meant to create infighting and division so the hea… https://t.co/Gb3kI2fbji
— Jeremiah Ortega (@Jeremiah Ortega)1513717762.0

Some people feel that the campaign is actually being incredibly harmful. As one Twitter user said, it takes the heat off the abusers.

Others believe we should be focusing all of our efforts into systematic change and accountability.

The Streep "She Knew" campaign is stirring up a lot of conversations on Twitter and doesn't seem to be dying down. It remains to be seen if the person behind the campaign will come forward.

Whoever is behind the campaign clearly thinks that Streep is an enabler of Weinstein.

The artist clearly chose to focus on this point, instead of that systematic change others are talking about. It seems Streep's name won't be out of the news anytime soon.