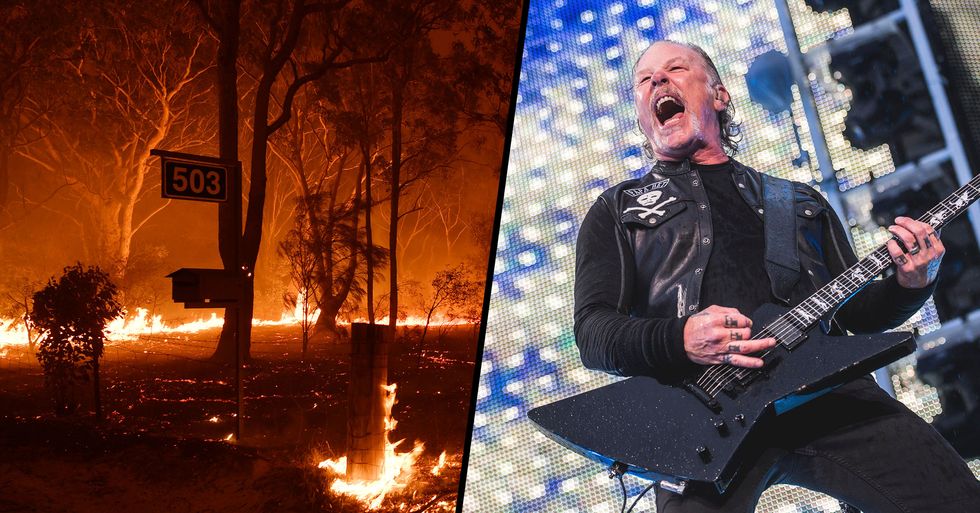 Australia is in the midst of one of the worst bushfire crises the world has seen.

Since September, entire communities have been engulfed by relentless heat and fires, and the flames are showing no signs of slowing down - which means only one thing... death tolls are rising.

The metal band Metallica has announced a very generous pledge to the Australian bushfire relief effort, so keep scrolling to find out more and how other celebrities have helped...

Australia is in desperate need of help.

The fires have been burning for nearly 4 months now, and they have so far destroyed thousands of homes and killed over a billion animals. Thankfully, a handful of generous celebrities have kindly donated money to the Australian bushfire relief effort and here are a few of them...

The Australian-born actress auctioned off a private lunch date and managed to raise a whopping $100,000 for it.

9. Kylie Minogue and her family.

The American metal band decided to announce their pledge via Instagram in an emotional and heart-felt post.

They posted a harrowing photo of a firefighter facing a huge blaze in a forest...

"We are totally overwhelmed by the news of the wildfires sweeping through millions of acres across Australia, with major impact in New South Wales and Victoria. The resulting destruction and devastating effects on all residents, animals, the environment and the incredible land in Australia is truly heartbreaking," they started by writing.

They want to help as much as they can...

"Please join us and do whatever you can to assist as we, along with our @allwithinmyhandsfoundation, are pledging A$750,000 to the NSW Rural Fire Service and to the Country Fire Authority in Victoria to aid in the relief efforts."

The post acknowledges the incredible work of the NSW Rural Fire Service...

"The world’s largest volunteer firefighting organization," they said, including, "all funds donated during this State of Emergency are directed toward services related to and victims of these particularly destructive Australian bushfires."

"A volunteer and community-based fire and emergency services organization which helps to protect 3.3 million Victorians, and works together with communities to keep Victorians safe from fire and other emergencies," the post wrote.

While many applauded the band's donation...

A lot of fans had better ideas, with one user writing, "Y’all should do a fundraiser concert with a bunch of other rock bands like Live AID but you donate funds to Australians affected by the fires."

All we can do is hope and pray that these acts of kindness will eventually make a difference to the people of Australia.