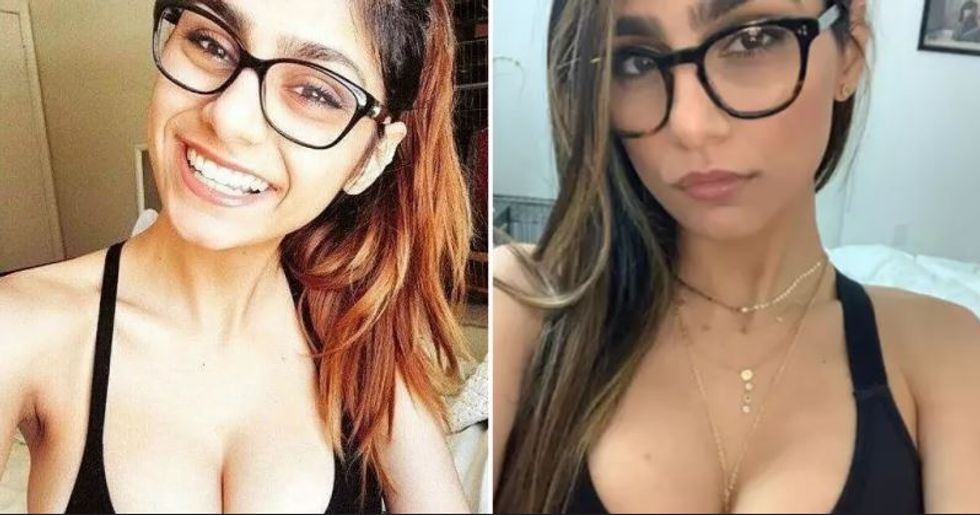 Ex-adult star, Mia Khalifa, has come forward with an unusual, yet effective way to raise money for the victims of the Beirut explosion in her home country of Lebanon.

She's auctioned off her iconic, and infamous, glasses and she's made a TONNE of money doing so!

Who hasn't heard of Mia Khalifa these days?

The former adult star has been making an awful lot of headlines recently, but this week, people are talking about something other than her controversial career.

Back in her X-rated days, Mia was one of the most popular female adult stars out there...

And she was one of the most searched stars online.

Mia very quickly rose to fame in the industry...

The Lebanese star began her career in the United States in 2014 and, by December that year, she was ranked as the number 1 performer on the most popular adult site.

Some of her performances ruffled feathers, however...

Her career choices caused controversy in the Middle East - the place in which Mia was born - due to one of her performances involving her wearing an Islamic hijab whilst performing sexual acts.

Her portrayal of the religion caused a lot of controversy...

And one video, which showed Mia and her co-star playing along to a terrorist-style beheading scene, caused outrage and even resulted in Mia receiving abuse and death threats over her actions.

She even received threats from the terrorist organization, ISIS.

Mia, who was raised Catholic, had manipulated images of herself shared online by an ISIS executioner threatening that she will be going to Hell - she replied to the threat light-heartedly, saying: "I've been meaning to get a little tan recently."

Mia was twenty-one-years-old at the time of the video and she insisted that it was the producers' idea to involve the beheading theme...

The terror group also hacked her Instagram account, filling it with Jihadi propaganda before Instagram stepped in and shut down her account. This frightening incident was what lead Mia to leave the industry for good.

She left the industry 3 months later...

Mia transitioned into a career as a social media personality, webcam model, and sports commentator. She also runs her very own Youtube channel, which has over 740,000 subscribers.

One of her old interviews spilled some home truths...

She took to her Twitter account a few months ago to reveal an interview that she did with her friend, Megan Abbott, about leaving the industry, how she adjusted to life after being a huge adult star, and how it wasn't all "sunshine and flowers."

The interview was designed for Mia to "tell her story."

She discussed how she got into the industry and, of course, the controversy surrounding the death threats from ISIS. "The turning point, of course, was when I did the hijab scene," she admitted. "That is when the ISIS death threats came in, all of the news broke out... globally," she added, "not just in America. It was trending on Twitter, it was all over the news."

Mia is still feeling the consequences of the controversial adult film...

"I was banned from a handful of countries… Egypt… Afghanistan… Very Muslim countries were deeply offended by it, and I’m Catholic," Mia explained in the interview.

The topic of money was brought up...

Mia announced that, in total, she only made around $12,000 from her time spent working in the adult industry. However, many fans found this hard to believe and they took to Twitter to express their disbelief, but Mia was at hand to correct these rumors.

Mia reminded her fans that she was only in the industry for a few months...

"To clarify, I was never offered millions, nor do I expect it," she went on to say, "I’m just clarifying common misconceptions about me, and in turn, about the industry... I was involved in it so briefly, but my actions spread like wildfire, and I continue to be ranked (truly baffles me) 5 years after leaving the industry. This is why people think I still perform."

Ever since her confession, Mia has been focusing on moving on from that chapter of her life...

And, this week, she has been using her platform to raise money for a cause incredibly close to her heart.

As you will all know, Mia was born in Lebanon...

The country who's capital city, Beirut, was recently rocked by a devastating explosion.

Since the horrendous blast, Mia has been using her platform to raise awareness...

And has been sharing the links to numerous different charities and organizations that have been helping the victims get back on their feet.

But now, the star has decided to take matters into her own hands...

By auctioning off her infamous square glasses.

In a post announcing that the infamous specs would be up for grabs, Mia wrote:

"THE INFAMOUS MIA KHALIFA GLASSES - AUCTION. 100% of proceeds will benefit @lebaneseredcross [Lebanese Red Cross] and their tireless efforts in Beirut."

As for the condition of the specs?

"Condition is: Used & Abused." Of course, they are.

"I’m just trying to get creative, there’s always more that can be done and this felt like a cheeky way to raise funds and make sure the conversation and attention doesn’t diverge from this crisis." Then, she humorously added: "Creeps are welcome, your money is just as green as ours!"

Almost instantly, the bids started to soar in...

And, remarkably, her retainer offer worked!

Sharing a screenshot of the auction, Mia revealed that the highest bid was close to $100,000, writing: "AIWAAAAAA!!! We are almost at $100k in 11 hours!!!! The link is in my bio! LET'S GET HALF A MILLION TO THE @lebaneseredcross BY NEXT WEEK!!"

The glasses have now been sold for a whopping $100,000 for Lebanese Red Cross' 'tireless efforts' in Beirut following the devastating explosion in Beirut.

But no matter your opinion, at least she's doing her bit to help! In the meantime, if you don't fancy bankrupting yourself, visit Mia's Instagram account to find the links to all the charities helping with the aftermath in Beirut.