Michael B. Jordan Says If He Played Superman It Would Be Authentic to Comics | 22 Words 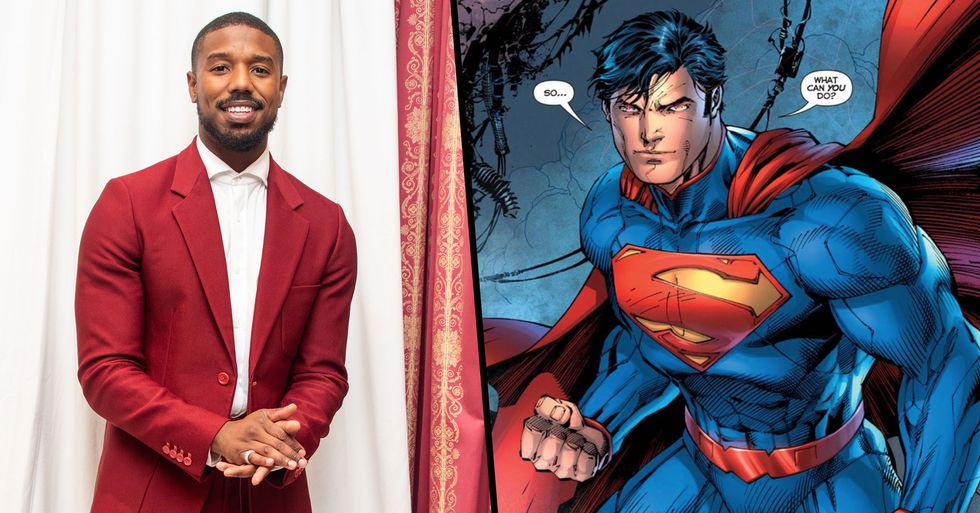 Michael B. Jordan Says If He Played Superman It Would Be Authentic to Comics

Rumors surrounding the future of one of Marvel's most famous superheroes has everyone talking. About a month ago, the internet started bubbling with the possibility of Michael B. Jordan becoming our next Superman and we're totally here for it!

But what will happen to our current red-caped actor, Henry Cavil? He, as well as Jordan, have spoken out about the whole thing, and what they've said has us even more excited for the new Marvel movies.

Keep scrolling to see the video that details Superman's future...

But there are some things fans have noticed...

The main characters of the MCU tend to be white males. If you think of the most popular superheroes, that's exactly what they are.

To the amazing addition of Spider-Man, (yes, we love Tom Holland!) the biggest Marvel movies tend to be those focused on those male characters.

And, sure, there are some female superheroes.

But it tends to be a rather unbalanced mix.

After a twenty-year wait, this revolutionary film hit the big screens and finally gave audiences what they were waiting for.

What's the importance of having black superheroes?

Especially for children, it can be difficult growing up without seeing people that resemble you in successful positions.

So, having a white, male superhero squad creates barriers...

For you, it may seem like a little, insignificant detail, but for young girls and children of color, it proves to be a barrier between them believing in themselves and achieving their goals.

We already know cinema has a massive impact on all of our lives...

So it makes sense that these factors correlate. It is now our job to make sure everyone feels like they can have their own type of hero to look up to and that's exactly what Jordan, as well as the rest of the cast aimed to do in this film.

If you've never seen Black Pather, you may know Jordan from his other famous role...

He starred in Creed, where he played Adonis Johnson, who is being trained by former World Heavyweight Champion Rocky Balboa in order to take on his former rival, Apollo Creed.

These new rumors could solve at least half of our Marvel problems...

Michael B. Jordan, has recently been in the spotlight after rumors surrounding his next superhero venture.

Jordan could be in talks to take on the coveted red-cape!

That's right. After defying all expectations as the badass Killmonger, he is looking to expand on his role in the MCU.

And it all starts with becoming Superman.

Apparently the actor has already met up with Warner Bros. in order to discuss the role in more detail as well as promote the "fresh-feel" that Jordan could bring to the table.

Currently, the dashing Henry Cavill is keeping the seat warm...

He played Superman across 3 films: Man of Steel, Batman v Superman: Dawn of Justice and Justice League. However, after the numbers at the box office flopped heavily, talks around a better fit for the role have already begun.

Marvel has already stated that they don't plan on keeping Cavill long-term...

But the actor himself told Men's Health that he's not entirely finished with the character yet claiming that the "cape is still mine."

But maybe not for long...

If the rumors have any truth behind them, we will be seeing Jordan as our next Superman.

Recently, he had his say on the whole thing.

In an interview with MTV, the star claimed that if he were to take on the role, he would have to do things the "right way."

These were his words:

"Honestly, I’ve been rumored to play Morpheus, to Superman, to Duck Tales reboot, to Power Rangers, and everything in between. So it’s like I’m kinda used to the rumors I’m playing something."

"But, anything that I do dive into has gotta be done the right way. It has to be full of authenticity."

He said he understands how the fans may react with the change...

"I’m a fan of comic books, you know? I understand, you know, the fans being upset at ‘Oh now, why are they doing this and why are they changing that?’ I would feel the same way about certain things."

He finished off by emphasizing the point about being authentic.

"So just know, if I ever were to dabble in anything, it would be authentic and something that I feel like people would really support."

I guess only time will tell...

And while you're waiting, I have the perfect piece to tide you over. Have a sneak-peak look at the new movies Marvel is set to release in the upcoming year.