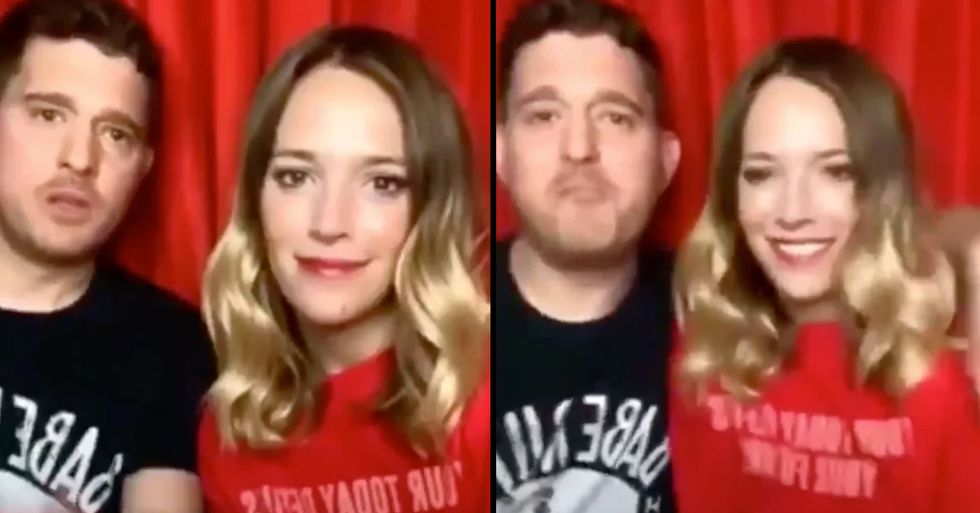 Michael Bublé and his wife Luisana have been living in constant fear after their viral Instagram Live video has caused an extreme backlash, resulting in the star receiving death threats.

But that's not all,  Bublé's apparent "abusive behavior" has got everyone on Twitter using the hashtag, #michaelbubleisoverparty.

Keep scrolling to read the vial comments, and watch the video that started it all...

When accusations of domestic abuse started surfacing, we were all left shocked and confused. And fans claimed to have noticed a reoccurring pattern, as opposed to just a one-off incident. Keep scrolling to see the video so you can decide for yourselves.

While he has always credited his fans for his success, they have now turned on him.

The Canadian singer has always been public about how much he adores his fans, but in spite of recent events, they have started calling out the jazz singer for his behavior.

I've said it before and I'll say it again, celebrities should spend their days quarantining like normal people, as opposed to trying to entertain us virtually because something always goes wrong. Take Vanessa Hudgens and Danielle Bregoli as the perfect examples.

Some fans felt that the singer was being particularly "rough" with his wife.

While the two were performing children's songs together, he apparently elbowed her pretty hard, before seeming to force her to apologize for interrupting him while he spoke.

Fans also claimed they noticed how uncomfortable she looked throughout the video and even when he pulled her in for a side hug, she had an awkward smile on her face.

In an older video from last month, some fans also noticed some strange behavior...

One user said this:

"Plz tell me what you think of this... to all of us is clearly a man being abusive with his wife, the way her grabbed her by the arm... that’s Michael Bublé... she keeps on denying it but there’s so many videos of him and treating her the same way," and has since received 100 likes for the comment.

And even though this user claimed it was playful...

@rnorman17 @BTS_twt_JIKOOK There's nothing playful in that clip, just look at her reaction. She knows a beating is coming her way later ☹️
— James Smith (@James Smith)1586778231.0

Other fans are not so sure.

However, now Bublé's wife has spoken out...

Because of all the backlash directed at her husband, Luisana Lopilato has been forced to respond to the allegations.

She wrote this in Spanish (which was then translated by Hola! to English):

"It's incredible how some people are!! While we are in the middle of a pandemic and living our lives under quarantine, angst, fear, loneliness, and uncertainty of all kinds!"

"[I] come out every day with my husband to try to do [Instagram] lives to bring some happiness, entertainment, longing, and we have to put up with, hear and see what people with ill intentions are posting without knowing anything about our family and after all the pain that we have experienced."

"I want you all to know that I have no doubts about who my husband is and that I would choose him again a thousand times over!"

"Without any more to say and do what I believe is correct when someone comes after my family, and leave the consequences to God! The world needs more now than ever 'love, faith, values, unity, and solidarity' NOT these kinds of people."

However, the backlash didn't stop...

Despite Luisana being explicit about her love for her husband, people kept prompting her to ask for help if she was being abused.

So, she released a second statement:

This time she said in a video: "It's very important that we pay attention to these problems that have been mentioned and that I am lucky not to suffer."

"But it is important to pay attention to be able to help women that are going through it."

Bublé himself has not spoken out as of yet.

But it seems as though the backlash has only gotten worse for the couple. It has even triggered the Twitter hashtag... #michaelbubleisoverparty.

As well as the abuse on Twitter, Bublé has also been receiving terrifying death threats after the whole ordeal, which Lopilato opened up about this week after appearing on the Argentinian talk show, Intrusos.

The viral video has sparked something menacing...

Understandably, Lopilato is fearful for her family. The couple has 2 sons and 1 daughter, Noah, 6, Elias, 4, and daughter Vida, who is only 22 months.

"There were a lot of threats, the positive messages we received outnumbered them but I am worried for my family. I suffered a lot with what happened."

She revealed that Bublé was extremely upset by the violent messages as he has a lot of family and friends in Argentina.

"Can you imagine what it feels like to receive a photo from Argentina of a youngster holding a weapon and the warning: 'This is what you’re going to get when you come here!'"

Lopilato has since taken to Twitter to shut down all the "disrespectful lies."

"It's incredible how some human beings are!!" she posted. "While we suffer this pandemic and we live moments of confinement, anguish, fear, loneliness and uncertainties of all kinds! Defending Bublé once again, Lopilato called him a "gentleman" who is "always trying" to make her happy.

She appears to be totally distraught by the fraudulent claims.

definitely feel like @MichaelBuble forgot where he was for a minute when he snatched his wife on camera.
— Cydney Wood (@Cydney Wood)1589739475.0

"Every day we go out with my husband to do lives to bring you a little joy, entertainment and we have to listen and see what malicious people publish without knowing anything about our family," she continued. "I want you to know that I have no doubts who my husband is and I would choose him a thousand times over!! It's not fair!"

A rep for Bublé referred to the allegations as "a failed effort of cyberbullying." And after reading some of the comments, people are clearly going overboard.

He later went on to release a statement saying: "Anyone who watches them on Facebook Live every day can see that this is a beautiful partnership filled with love."

Here's the video causing all the commotion...

It seems Luisana is happy and comfortable in her relationship with Michael. We wish them all the best. Keep scrolling if you want to see why Instagram Lives and celebrities aren't a good fit...