Michael J. Fox and Christopher Lloyd Have "Back to the Future" Reunion | 22 Words 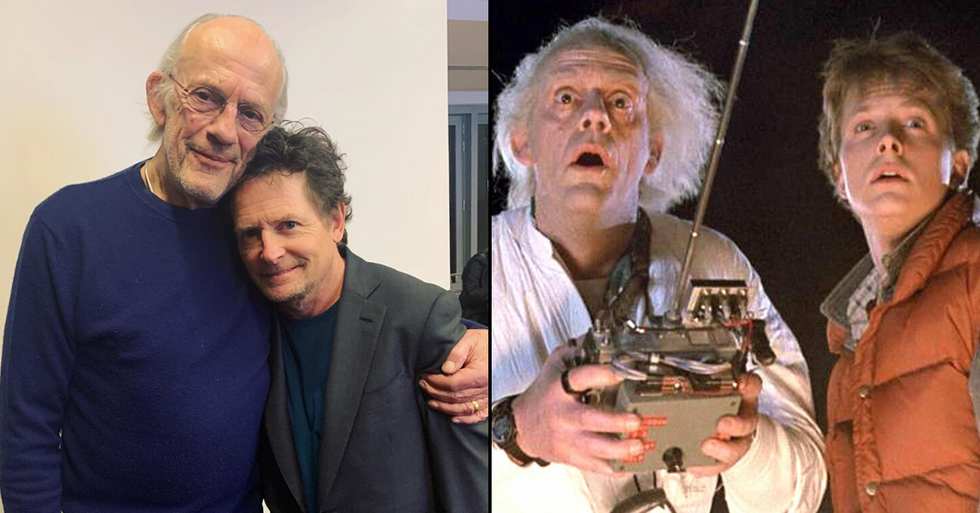 Michael J. Fox and Christopher Lloyd Have "Back to the Future" Reunion

Calling all Back to the Future fans!

Nearly thirty-five years after the iconic sci-fi movie came out, Michael J. Fox and Christopher Lloyd have made a very public reunion at a charity event, and it is everything we could have ever wanted.

Back to the Future is one of the most iconic sci-fi movies of all time.

The first movie was released in 1985 and it gave us all kinds of eighties sci-fi goodness.

The movie became a trilogy over the years...

And it followed the time-traveling adventures of Marty McFly (Michael J. Fox) and Dr. Emmett Brown (Christopher Lloyd) who is also known as the Doc.

The Doc, who is renowned for being a little bit crazy, invented the time-traveling DeLorean...

And he accidentally sends Marty, a typical eighties' teenager, back in time to 1955 where he must ensure his parents meet and fall in love in order for him to be born.

Now, who could forget when Marty's young mom has a major crush on him when he travels back in time and meers her?

Now that's something of a true nightmare!

The second movie involves Marty and the Doc traveling to the year 2020 which, we must say, portrays an extremely unrealistic futuristic world. We're still waiting for those hoverboards!

And the third movie sends the dynamic duo back to the Wild West...

Now, who could forget that time-traveling train?!

The Back to the Future trilogy is utterly timeless and they are great family movies that will never get old.

But as we are all well aware, Michael hasn't had the easiest of times in the last 2 decades.

In 1991, when Michael was just twenty-nine, he was diagnosed with Parkinson's Disease.

Even though he didn't share his diagnosis with the public until 7 years later, he committed himself to the campaign for increased Parkinson's research in 1998.

It started out as a back problem...

Speaking to the New Yorker in 2019, Michael said, "I was having this recurring problem with my spinal cord. I was told it was benign but if it stayed static I would have diminished feeling in my legs and difficulty moving." "Then all of a sudden I started falling — a lot. It was getting ridiculous. I was trying to parse what was Parkinson’s and what was the spinal thing."

Michael's health has never been the same since the diagnosis...

"But it came to the point where it was probably necessary to have surgery. So I had surgery, and an intense amount of physical therapy after," he continued. "I did it all, and eventually people asked me to do some acting. Last August [2018] I was supposed to go to work. I woke up, walked into the kitchen to get breakfast, misstepped and I went down. I fractured the hell out of my arm. I ended up getting 19 pins and a plate. It was such a blow."

This must have been such a difficult time for the young actor...

And he had to make some sacrifices to his professional life. Michael announced his retirement from Spin City in January 2000, effective upon the completion of his fourth season and 100th episode. Expressing pride in the show, its talented cast, writers and creative team, he explained that "new priorities" made this the right time to step away from the demands of a weekly series.

The actor went on to launch The Michael J. Fox Foundation for Parkinson's Research.

The New York Times has called his organization "the most credible voice on Parkinson's research in the world."

He returned to primetime network TV as Mike Henry on NBC's The Michael J. Fox Show. The show, which quickly gained nationwide attention, centered on a beloved newscaster and family man returning to work following a diagnosis with Parkinson's.

But since his diagnosis all of them years ago...

Michael has continuously campaigned for the cause with The Michael J. Fox Foundation and has donated a lot of money to Parkinson's charities and research.

And the game event was held specifically to benefit the cause.

The event had a very special guest...

And that was the Doc himself!

And he captioned it, "Going 88mph for the Michael J. Fox Foundation Poker Night," -  a great reference to the DeLorean.

Fans were overjoyed with this little reunion...

"Great Scott!!" one user wrote, with another writing, "Wait a minute. Wait a minute Doc. Uh.. are you telling me you built a time machine … out of a DeLorean? Brings back so many great memories. Best of health to both of you."

We hope the guys had a great evening at the poker night...

And we're sure a lot of money was raised for the amazing cause that the Michael J. Fox Foundation works so hard for.