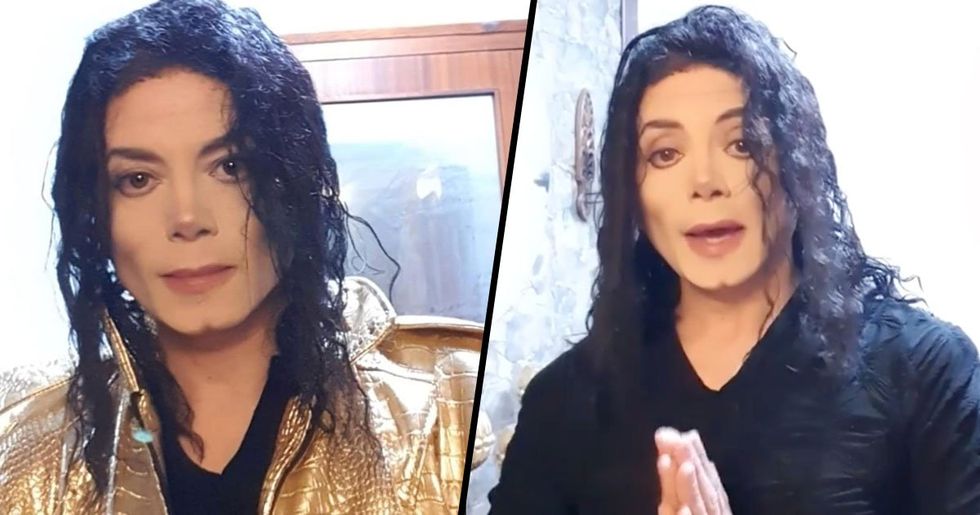 Michael Jackson Impersonator Called for DNA Test for Being That Convincing

This year has completely changed the world's perceptions of the King of Pop.

Since the release of HBO's documentary series Leaving Neverland earlier this year, the allegations of Jackson abusing young boys gave the late singer a completely different image and, despite many loyal fans standing up for him, there are many out there who were left disgusted by his horrific acts.

But Michael Jackson continues to remain one of the most famous pop stars of all time, and there are still people out there making money from his legacy.

One Jackson impersonator looks that similar to the late Michael Jackson that fans are calling for a DNA test. Keep scrolling to learn more...

There's no denying that Michael Jackson is one of the most famous singers in the world.

Often referred to as the King of Pop, Jackson was a pop star from a very young age and went on to become one of the most loved and famous men in the world.

He became one of the most significant figures of the 20th century...

Jackson was best known for popular hits such as Billie Jean, Beat It, and Thriller.

And since his death, serious allegations have been made against him.

Jackson was always accused of inappropriate relationships with children...

It was no secret that Jackson held strangely close relationships with the children in his life, such as back-up dancers and the young boys who would idolize the singer.

The HBO documentary Leaving Neverland was released earlier this year...

It interviewed 2 of Jackson's alleged victims who were sexually abused and groomed by the singer when they were just little boys, back in the 1980s, and the details were truly horrifying.

Jackson has become a disgraced name since the documentary...

But this hasn't stopped people from supporting the late-singer and even performing tributes in his name.

Thousands of people around the world earn a living from being a Michael Jackson impersonator...

Despite Jackson no longer being very popular, many people still enjoy to tribute the singer by fully impersonating his appearance and his music.

Many impersonators do a good job in resembling the King of Pop...

But there's an impersonator out there who looks a little too similar to the late Jackson himself.

Twitter user lourdes posted this picture of her "boyfriend."

She didn't mention her boyfriend's appearance at all, but he looks awfully familiar...

The original post has so far acquired over 3,000 comments and has been retweeted nearly 4,000 times, and it's easy to see why.

But it wasn't just the resemblance...

People had a lot of questions.

Who is this man?

His name is Sergio Cortès, and whilst it turns out he doesn't have a girlfriend, he is, in fact, a professional Michael Jackson impersonator from Barcelona, Spain, who earns a pretty comfortable living from mimicking the King of Pop.

It's unmistakable, and obviously, Cortes likes and respects Michael Jackson enough to dedicate his life to paying tribute to him - despite the current backlash against the late singer.

Cortès can also sing and dance in similarity to Jackson...

And once he adds in the hair and makeup, you'd think it was the real deal.

He has fans of his own, and his shows attract crowds.

He doesn't just look like the King of Pop, he also is pretty talented. He tries to capture the magic that was MJ, and his shows include all the lights, dance moves, and classic hits that any Jackson fan would expect.

It's difficult to tell who is who...

One would think that Michael Jackson himself had risen from the dead!

Cortès has recently announced a new tour date in Thailand...

He released a video on social media to tell his 123,000 followers about the new tour, but fans weren't talking about the upcoming show.

One person said: "Oh my god, you're not Sergio Cortès, you're Michael Jackson. Someone get his DNA."

Fans need evidence that he isn't the real deal...

Someone else added: "I need a DNA test, I'm sorry," whilst a third wrote: "You can't tell me this ain't the real Michael Jackson."

Cortès clearly doesn't believe any of the allegations made against Jackson...

And he isn't the only impersonator out there currently making a living from the King of Pop.

Robin Parsons, from Essex in the U.K., has been working as an MJ impersonator for more than 10 years.

Despite not looking as uncanny as Cortès, Parsons manages to perform around 150 shows a year as MJ.

But he isn't as sure about Jackson's innocence...

He recently said he would burn all of his costumes tomorrow "if there was any piece of evidence" that Jackson was a pedophile, off the back of the allegations made in Leaving Neverland.

The documentary hasn't affected his work as much as one would think...

Speaking to LADbible, Parsons said: "It's not a huge apocalyptic effect, as some people might have expected." "A big reason is that we've lived in a world in recent years where fake news has had such a major impact on our lives and what we perceive, and I think people are starting to get a little more wise to it."

Parsons continues to impersonate Jackson on the grounds of a lack of evidence.

"I don't want to portray people coming out as child abuse victims as something we should just turn our noses up at - it is a very, very serious allegation," he went on to say. "But for that reason, surely then we should look at all the facts and the evidence that surrounds the allegations before we make up our minds."

Sadly, there will never be any concrete evidence of Jackson's abusive behavior.

"We're currently in a world where a very important movement has uncovered so many disgusting things that have happened, but it has now got to a stage where it's as though we should just believe what everybody says without checking the facts," Parsons said. To learn more about Michael Jackson's disturbing behavior, keep scrolling to hear what Sir Elton John had to say about the King of Pop...