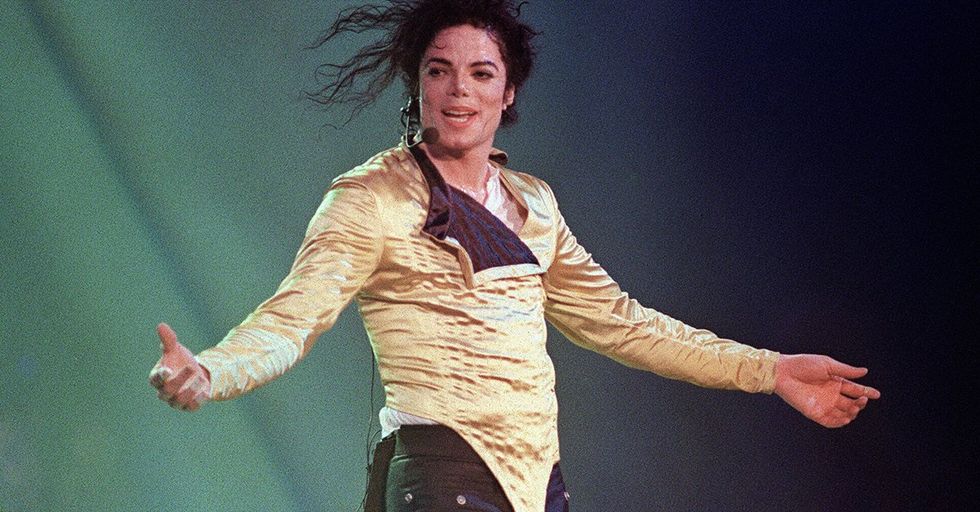 HBO's new documentary, Leaving Neverland, takes a deep dive into the sordid legacy of Michael Jackson. Specifically, it focuses on two of Jackson's alleged sexual abuse victims: Wade Robson and James Safechuck. It's a documentary three years in the making, and creator Dan Reed says "For many years, Jackson posed as this innocent lover of children and we wanted to make it absolutely clear that what happened was sexual activity, without any doubt whatsoever."

But that kind of certainty means a lot of response. It's not just the general public that's upset Reed is coming for the King of Pop. Other celebs are having strong reactions (both positive and negative) about the documentary. Oprah is hosting an interview with the victims. Amanda Palmer is writing poetry about it. No matter who you are, it seems like you've got an opinion about what happened and celebs are not afraid to share those opinions on Twitter.

Let's start with the facts.

Leaving Neverland follows the stories of Robson and Safechuck at ages 7 and 10. The men say they were abused by Jackson.

The boys definitely did spend time as children with Jackson.

But while they did not make any allegations during Jackson's life, after his death they came forward with claims that he molested them.

The story starts with the boy's being star struck over the popular celeb.

But it follows them through the realization that their relationship with him was inappropriate. Each of the men says that they experienced confusion around what that relationship was at the time.

So what does the documentary bring to the table?

While both Robson and Safechuck have spoken about their experiences, they say that the documentary tells more about how the abuse happened, especially over such a long time.

But the allegations have always been contentious.

And the new documentary is bringing back the controversy.

Jackson's estate has been very clear about their perspective.

“This is yet another lurid production in an outrageous and pathetic attempt to exploit and cash in on Michael Jackson," the estate said. “This so-called ‘documentary’ is just another rehash of dated and discredited allegations."

But the men's attorney says differently.

“Them telling their stories is not about getting attention for themselves. When someone is sexually abused as a child, especially by such a prominent figure, it changes the course of their lives."

The documentary also has a few holes in its story.

None of the members of the Jackson family or the estate are included in the film.

It does include comments from Michael Jackson himself, and as he states,“This isn’t a film about Jackson. It’s a film about Wade Robson and James Safechuck."

All this back and forth has led to a strong public response.

Everyone from your aunt to Oprah is responding.

Jackson's family is speaking out clearly against the film.

In an interview with Gayle King, Tito, Marlon, Jackie, and Taj Jackson, the group seems to remain adamant that Michael is innocent.

Taj Jackson says he was there.

“I grew up in it, so for me, it wasn’t odd," he said. “To the outside world, yes, I think it can be odd. I mean, I’m not oblivious to what it sounds like. But when you’re actually there in that atmosphere and you’re around it, and you’re watching movies, whether, with his kids, whether it’s Little Rascals or Three Stooges, and you’re watching these things, it’s like, it’s very innocent."

Marlon Jackson is also convinced that the documentary is spewing lies.

"There has not been not one piece of evidence that corroborates their story," he argues.

But the members of Jackson's family aren't the only ones defending him.

Wendy Williams came out in support of Jackson during The Wendy Williams Show by saying, "I don’t believe a word of anything in this documentary. Michael is no innocent, but that’s not him."

No one can deny that there's a strong draw for people to accuse Jackson.

“It’s always been about money," Taj said. “I hate to say it: when it’s my uncle, it’s almost like they see a blank check."

But on the other hand, we are living in the #metoo era.

We're starting to realize that people in power are capable of many sins.

A surprising number of celebs are coming out in support of the victims.

Even people you wouldn't expect.

Rose McGowan has always been a strong advocate for victims, and this case is no exception.

The survivors are brave. .@Oprah is brave. The documentarians are brave. This is what brave is folks, standing agai… https://t.co/uCOyl1vIf9
— Rose McGowan (@Rose McGowan)1551630933.0

She tweeted that the people sharing this truth are brave and that we need to hear it.

Amber Tamblyn connected the experience to her own childhood.

As a former child actress, I can’t help but watch this documentary and think about how wrong it is for children to… https://t.co/R5YwGusRYX
— Amber Tamblyn (@Amber Tamblyn)1551662745.0

"As a former child actress, I can't help but watch this documentary and think about how wrong it is for children to be put in the position of performing for the soul (sic) purpose of pleasing adults," she wrote.

Rosie O'Donnell put into words what many people were thinking.

She shared that the documentary was haunting.

Judd Apatow shared that he believed all of it.

It takes days to recover from this documentary. Five minutes in you will think to yourself “oh my God, every word t… https://t.co/6ijYxS5RAG
— Judd Apatow (@Judd Apatow)1551509882.0

Whether you believe the stories or not, he's probably right that it takes days to recover from watching it.

She tweeted a poem that is both haunting and powerful.

He called the documentary riveting and praised the former CEO of HBO, Richard Plepler, for making the piece happen.

With all of that debate, why did the filmmaker decide to tackle the subject?

Dan Reed shares that he had a motive: "For many years, Jackson posed as this innocent lover of children and we wanted to make it absolutely clear that what happened was sexual activity, without any doubt whatsoever."

But even he says he approached the project with skepticism.

What finally brought him around was research into the criminal investigations against Jackson.  "We found nothing that contradicted and we found quite a lot that corroborated Wade and James's stories," Reed explains.

But the interest went deeper than that.

The #MeToo movement has created a groundswell of support for opening up about celebrities misconduct.

But how do you tell a #metoo story when the victims loved their abuser?

"It's the complexity that drew me into wanting to really tell the story which is that in an abusive pedophile relationship there is both love affection mentoring friendship caring and there is sexual abuse. Those two things coexist," Reed shares.

No matter where you stand, the film shows the complexity of a confusing relationship.

An adult superstar spending time with kids is never going to be a simple question.

So where do you stand?

Or are you a hardcore Jackson supporter?

I guess you'll have to watch the movie and decide.