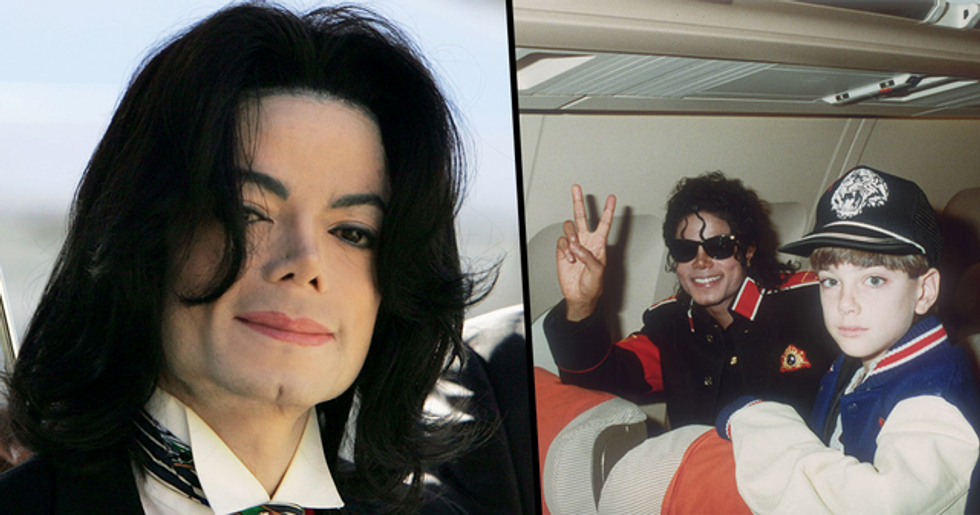 Michael Jackson was crowned the king of pop, rock and soul. He crossed racial barriers and appealed to fans regardless of colour or culture. He was known for his incredible dancing, and beautiful voice. Aside from that he was surrounded by controversy during his life and for a long time after his passing, no more so than now.

His music has been listened to by millions across the globe but that could be coming to an end. Songs such as 'Billie Jean', 'Smooth Criminal' and the Halloween classic 'Thriller' may no longer be heard on radio and be lost forever.

The King of Pop may be losing his crown.

Michael Jackson has been in the spotlight for years, and won more awards than anyone else in the world. But now people are suggesting that his music shouldn't be played on the radio any more.

The King of Pop won a huge amount of awards, including 13 Grammys.

The Jacksons were like a modern-day Von Trap family of musicians.

Michael Jackson is the seventh of nine Jackson children. The first five brothers became famous with the Jackson 5. The sisters La Toya and Janet Jackson later gained notoriety too, while another brother Randy joined the Jacksons later.

It all began with the Jackson 5.

It was 1964 and Michael Jackson was just 6 years old when the 5 brothers first formed their band. They got a record deal with Steeltown Records in 1967 and then with Motown the following year. That was when it all started to kick off.

I want you back.

The Jackson 5's first single was I want you back. It has since sold over six million copies worldwide and is in the Grammy Hall of Fame. It has since become one of the most sampled songs in hip hop.

It sounds so simple when the Jacksons sing it, but their attraction was a force to be reckoned with. They were the first group to have their first four singles reach number one in the USA, and they did similarly well in other countries around the world.

The Jacksons became synonymous with Motown.

By 1972, when Michael was just fourteen years old, he had already had seven top-ten singles. The Jacksons were the face of Motown and were one of the first black American groups to have a crossover following by both white and black Americans.

Michael was the first of the child stars that have taken the world by storm.

In 1972, Michael Jackson became a solo artist. He had already been performing professionally for four years. Over the next three years he released four solo albums.

Don't stop 'til you get enough.

In 1979, Michael Jackson released Off the Wall. It was the first album to produce four top ten hits in the US. This was his fifth solo album, following ten albums as The Jackson 5, and three as The Jacksons. He was still a teenager at this point.

The success of Michael Jackson was a Thriller.

In 1982, Michael Jackson released what has now become the best-selling album in the world ever, Thriller. This album alone earned him seven Grammys. It has sold over fifty million copies globally.

This is when Michael Jackson's success became meteoric.

The true king of pop, rock and soul.

This was the title that Elizabeth Taylor gave him, following the release of Black or White. He was no longer just a young, pop star. It was at this point that he was also recognised for his contribution to both rock and R&B music, as well as for breaking down racial barriers.

But in the '80s, the cracks started to show.

Michael had broken his nose when he was younger, but the rhinoplasty didn't work, so he continued to have plastic surgery done on it. His hair caught alight one time while he was working, which resulted in a large number of scars on his head. He also began to suffer from vitiligo, which made his skin begin to lighten. He used make-up to even it out, which made him even paler. It was around this time that he also became anorexic. His appearance started to look drastically different.

The name 'Wacko Jacko' was coined.

In 1986, Michael Jackson purchased a monkey, named Bubbles. Rumours spread that he slept in a hyperabic oxygen chamber, to retain his youth. Then he purchased Neverland.

In 1988, Michael bought 11km of land in California, where he built his own home-complex. It included carnival rides and a zoo, and in 2003 was valued at being worth $100 million. This was where some of the trouble began.

Michael was abused a child.

In 1993, Michael Jackson gave a 90 minute interview with Oprah, in which he explained that he was abused by his father as a child, both mentally and physically. His father used to whip them, in order to keep them in check while they were rehearsing. Although they all suffered at his hands, Michael was the youngest and found it the toughest.

It was alleged that Michael was abusing other children.

So Michael Jackson hung around young boys through much of his adulthood. His first accuser, Jordan Chandler gave a… https://t.co/oPdNRXRseY
— Lionel Something (@Lionel Something)1551665930.0

In the '90s, Michael was accused of abusing a thirteen year old boy, Jordan Chandler. He was backed up by his father. Michael claimed that it was an attempt at extortion, but Jordan was able to correctly describe intimate parts of Michael. Books and photographs with naked or nearly-naked young boys were found at his home in a police raid, although it was not technically illegal to own them.

As the pedophilia claims continued, Michael became dependent on multiple different drugs. He was hospitalised on multiple occasions following collapsing. At this point he was in his thirties, and had spent his entire life performing on stage. In 1993 he married Lisa Presley, Elvis' daughter. Three years later he married Debbie Rowe, with whom he had two children, Prince and Paris. He later had a third child, known as Blanket, with an unknown mother. He was still touring and releasing more albums.

How could these parents have happily left their 7 year old son at Michael Jackson’s gaff and fucked off to the Gran… https://t.co/Z8T2fW2ibQ
— Tom Lindley (@Tom Lindley)1551911025.0

In 2003, following the release of a documentary that contained proof of him holding hands with a young boy, he was charged with seven counts of child molestation. It was at this point that Michael started telling people about how he had sleepovers, but they were not sexual.

Macaulay Culkin, star of the Home Alone movie, was friends with Michael Jackson from the age of ten. He and his younger brother used to regularly have sleepovers at Michael's Neverland Ranch. He testified in support of Michael. Although he agreed that he often slept over, and that he stopped visiting as often after the age of fourteen, he said vehemently that Michael was never inappropriate with him.

A sad end for the King of Pop.

Michael Jackson is the third best-selling music artist of all time, behind The Beatles and Elvis Presley. He is in the Song-writers hall of fame, the Dance hall of fame, and he's the only artist to be entered into the Rock 'n' Roll hall of fame twice. He has 15 Grammys, 26 American Music Awards, and had 13 number one singles in the US. He died of a drug over-dose in 2009, a month before his final tour. He had a lot of financial problems, had struggled for custody of his children, and was plagued by allegations of his sexual abuse of children.

In 2013, Wade Robson and James Safechuck came forward to say that they had both been molested as children by Michael Jackson. They have since been interviewed and have said that they were each abused by Michael hundreds of times. Macaulay Culkin's testimonies corroborate a lot of what they said, although he maintains that Michael was innocent.

Now a documentary has been made by British director, Dan Reed. He has interviewed both Wade Robson and James Safechuck. They were interviewed completely separately but had very similar stories. The two men have received no monetary compensation for being in the documentary. However, nearly twenty years ago, they had both testified saying that nothing had happened.

The impact of Leaving Neverland is far-reaching.

The #MeToo movement continues to make an impact.

Following an expose in autumn 2017 about the extent of Harvey Weinstein's sexual abuse, dozens of celebrities have been exposed as behaving incredibly inappropriately, on multiple occasions. Notable figures include Kevin Spacey, Louis C.K. and Casey Affleck. It is in light of this new environment that the incredibly numerous allegations against Michael Jackson are started to be looked at differently.

There’s no doubt that Michael Jackson was a bit odd but this documentary just seems like it was made to make some m… https://t.co/Ff3GekgXkC
— Sam Storey (@Sam Storey)1551908175.0

Leaving Neverland gave two victims the chance to speak up. However, as it was only from one side, and as Michael Jackson is no longer around to defend himself, the documentary can feel a little one-sided. But as neither of the men were paid for coming forward, and have since received numerous death threats, people are saying it doesn't seem like they would have much reason to lie.

Some people are disbelieving.

There are a lot of huge Michael Jackson fans in the world (seriously, it seems almost like a cult), and they are not happy about this new documentary. They want everyone to continue idolising Michael regardless. The problem is, if he was guilty then it is a very serious situation that his fans seem to be underestimating.

This is part of a bigger issue.

Children can be groomed online or in person, by a stranger or someone they know. They may be male or female and cou… https://t.co/sAGDaAAKsy
— NSPCC (@NSPCC)1551906481.0

A lot of people are questioning the veracity of people who have testified against Michael. However, it is to be expected that they would be confused. The NSPCC (a children's charity) describes it perfectly. If grooming happens to a child, then they are often unable to tell the difference between what was right and wrong.

It is important to listen to both sides.

Whether you love him or hate him, the discussion is incredibly important. Pedophilia is a very serious crime that cannot be tolerated. It is also important to think about what you are taking in, and what you are paying for, rather than just accepting things blindly. Both sides need to be acknowledged in order to reach a better understanding.

Are we saying our final goodbyes to the King of Pop?

It is always going to be difficult to know what is true and what really happened, but that is the nature of sexual abuse. It is hard to prove. However, the sheer number of allegations, plus the very peculiar habit of having young boys (and only young boys, no older boys and no girls) for sleepovers, is not normal behaviour. The radio stations are not casting a judgement as such, they are just saying that they would rather not support someone in this situation. If his music career wasn't so successful, would people be defending him so vehemently? If the allegations came out fresh today, would people say that all the accusers were lying? Or would people take the claims seriously? What do you think? Was he guilty? And if so, should we stop playing his music?