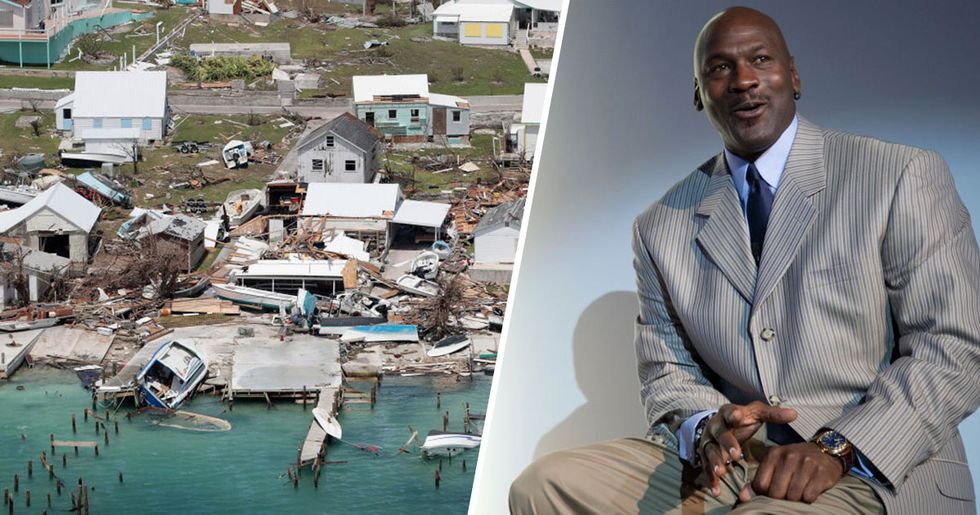 Hurricane Dorian has well and truly caused havoc across the Bahama islands.

With the death toll rising steadily as more victims are being discovered in the wreckage, the country is in a state of chaos. Homes and businesses have been destroyed. Lives have been lost and nerves have been hit.

Following the horror of this "Category-5" hurricane, the islanders need support.

American celebrities such as Tyler Perry have been pitching in - it was reported this week that the director donated his private plane to transport emergency supplies.

And Michael Jordan has also been stepping up the generosity, announcing that he has donated an eye-watering $1 million dollars to the relief efforts.

It seems like a lot, right? Well, it transpires that the Bahamas holds a really special place in Jordan's heart.

The legendary basketball player has opened up this week. When revealing why he chose to donate such a large sum of money, Jordan really surprised fans.

The storm first hit Abacos as a Category 2 storm but has gradually moved across the Bahamas, all while being bumped up to Category 4 by The National Hurricane Center in mere days. And the damage is staggering. Roofs have been ripped off, cars overturned, and power lines pulled from the ground as thousands of people sheltered in schools, churches, and hurricane shelters.

The storm has tragically claimed the lives of over fifty people and counting.

The first death to be announced caused shockwaves across the world. No one expected that it would be this serious. Following the horrifying footage of the storm, the Bahamas Press reported that a boy, aged only 7, was the first person known to have died in the hurricane.

Since the initial reports, over fifty have been announced dead.

With hundreds more still displaced and officially missing, it's hard to say at this point how many lives have actually been taken by this horrendous natural disaster.

British native, Lynn Armstrong, was left fighting for her life when hurricane Dorian caused her house with water.

Speaking to reporters, her husband described the horrific scenes.

The husband and wife stood on their kitchen counters attempting to escape the water engulfing their home. Sadly, after hours of waiting to be rescued, Lynn succumbed to hypothermia. Her husband told the press: "And then I kept with her, and she just drowned on me."

Lynn's daughter-in-law who lives in the U.S. heard about her passing on Facebook.

This story turned out to have a double tragedy. Lynn's daughter-in-law, Meghann Gaines, watched the video of her dad discussing the traumatic events of his wife's passing before she had been informed of the death. Gaines was devastated by the loss of Lynn but was also increasingly concerned about her father. It took Meghann days to contact her father after the horrific events of the hurricane. She told Fox News: "It’s just been my dad and Lynn forever. I mean, that’s everything. That’s his whole world. She did everything for him, and he did everything for her."

A Go Fund Me has been set up to help the widowed fisherman.

via: GoFundMe.com/Life for Howard Armstrong after Dorian Takes All

You can read the full details of the tragedy here.  In the past week, Howard Armstrong's daughter, Meghann, has set up a Go Fund Me page to help him to rebuild his life. So far, the page has made just over three thousand dollars, which is a long way away from the $25,000 target. On the page, Meghann writes: "Dorian truly stole everything from my father. There is absolutely nothing in the world that can bring back all that has been taken from him." She continues: "As difficult as it may be, with help, he can start again, he can have a new beginning."

Michael Jordan has opened up about how he has been deeply moved by the reports. The press has had a field day reporting the distressing stories of those affected by Hurricane Dorian.

Jordan owns property in the Bahamas.

The basketball legend has not revealed whether his property was affected by the storms. In a statement released by his rep, Estee Portnoy, Jordan said: "I am devastated to see the destruction that Hurricane Dorian has brought to the Bahamas, where I own property and visit frequently."

Jordan made a name for himself on the basketball court.

"By acclamation, Michael Jordan is the greatest basketball player of all time."

According to the NBA website, Michael Jordan was the best basket player of all time. Fellow basketballer, and a contemporary of Jordan, Larry Bird said of the player: "There's Michael Jordan and then there is the rest of us."

Jordan has also made a name for himself through his endorsements.

Michael Jordan sure is a marketing mogul. The retired NBA player is considered to be one of the most marketed sports figures of all time. Bearing in mind Jordan came before the age of Instagram, this feat is seriously impressive. Jordan has had endorsements with Nike, Coca-Cola, Chevrolet, Gatorade, McDonald's, and many more.

Is it any surprise, then, that Jordan has quite the fortune?

As of this year, Jordan's net worth stands at $1.9 billion.

Here we see MJ pictured at the 6th Annual Michael Jordan Celebrity Invitational Golf Tournament at the One&Only Ocean Club in the Bahamas. It's clear that the retired basketball legend cares a great deal about the Bahamas.

MJ doesn't plan on just throwing money at the crisis.

Despite pledging to donate a massive $1 million dollars to the Hurricane Dorian relief fund, don't be mistaken into thinking that that's all he's doing. In his statement, Jordan made it clear that he's going to keep a close eye on what's happening in the Bahamas. He said: "As the recovery and relief efforts continue, I will be tracking the situation closely and working to identify non-profit agencies where the funds will have the most impact."

Jordan has fond memories of the Bahamas.

The money will undoubtedly do a lot to support the relief effort.

It takes philanthropists like Jordan to really make a difference in crises like this. The money he has donated could mean the difference between death and survival. The retired basketball legend stated: "The Bahamian people are strong and resilient and I hope that my donation will be of help as they work to recover from this catastrophic storm."

Frankly, I'm sure that Jordan's money will go a long way.

Although no amount of money will be able to fix the mental stress that the Bahamian people have endured over the last couple of weeks. Thousands of people have lost everything and it will not be easy to start again. Want to learn more about the fisherman, Howard Armstrong, who lost his wife during hurricane Dorian's attack of the Bahamas? Continue scrolling for the full story...
40%