And he carried these values throughout his presidency... | 22 Words 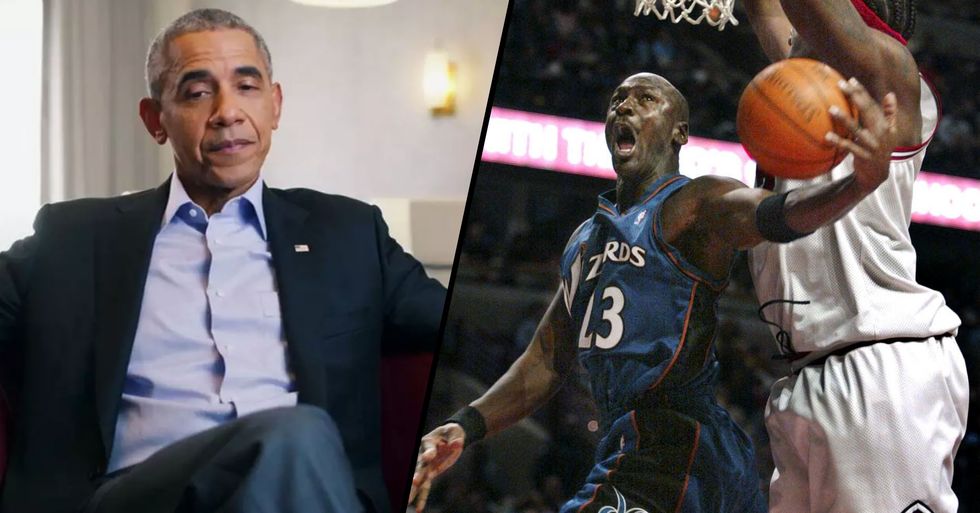 Netflix's new docuseries has recently de-throned Tiger King, but fans have just noticed how Jason Hehir, the director of The Last Dance has referred to our former president in the series...

Keep scrolling for the savage tweets...

The Last Dance has recently surpassed Tiger King as the new fan favourite.

But the recent controversy involving Barack Obama has caused some serious backlash.

And director Jason Hehir has only just figured out what's caused the recent uproar.

The show is a new docu-series focusing on Michael Jordan and the Chicago Bulls’ pursuit of a second three-peat during the 1997-98 campaign.

When the first 2 episodes came out on April 19, it received some pretty stellar reviews.

The Michael Jordan documentary The Last Dance on ESPN is outstanding. Remarkable depiction of not just his achievem… https://t.co/hABOGkMDUq
— Jason Ryan (@Jason Ryan)1588681703.0

One user even tweeted: "The last dance might be the only good thing of 2020 at this point." We feel you.

There was one thing in particular that everyone raved about...

It's definitely what we needed while being stuck in lockdown.

Obviously some parts were harder to watch than others.

But surprisingly it wasn't Bryant's footage in the show that stirred everybody up...

It was the "disrespectful" depiction of our former president that rocked the boat.

And people weren't going to let it rest...

The forty-fourth President of the United States smashed barriers by becoming the first-ever African-American leader of our country.

He focused on the legislation on ethics, as well as the expansion of health care services and early childhood education programs for the poor.

But despite everything Obama did for our country...

The director of The Last Dance decided it'd be funny to twist the title card for Obama into something downright insulting.

Fans hit out at the documentary for being "disrespectful."

Despite Hehir explaining it was just a joke, the description of former US President Barack Obama in The Last Dance has finally been updated.

@jaxon_alexander Yeah that’s probably accurate, going to be funny when Justin Timberlake comes in and his only acco… https://t.co/HDTEgydvPk
— Cade Onder (@Cade Onder)1587350726.0

Referring to Obama as a "Former Chicago resident," which isn't exactly a lie.

But Hehir has said he's had to change the text following online abuse since viewers didn't agree with his flippant remarks.

One person had tweeted: "So we just gonna ignore the fact that they called Barack Obama 'Former Chicago resident'??"

Hehir explained that it was "a little inside joke" from the editing room...

He highlighted the fact Bill Clinton was also referred to as "Former Arkansas Governor" in the series.

Hehir has since stressed that he has nothing but love for Obama.

Hehir said: "I was pretty adamant that when we have a celebrity, we wanted it to be organic to the story. We don't want to just have a president for president's sake... The reason he was in there is that he was a former Chicago resident."

Although people weren't buying it...

Imagine having the pull to get two former United States presidents for your basketball documentary and calling them… https://t.co/8FVnzli0Xp
— Cade Onder (@Cade Onder)1587348957.0

He said: "I've seen people who are investigating whether I'm a Democrat or Republican. I'm a huge Obama fan, so for people to say it's disrespectful and I did that on purpose? I mean, come on. I promise you he will be the president by the end of the series."

The change seems to have done the trick with the former president's fans...

With one tweeting: "Did anybody notice in Ep. 5 of The Last Dance that they changed 'Barack Obama - Former Chicago resident' to 'PRESIDENT BARACK OBAMA' hahaha good fix." While another added: "Congrats @BarackObama on the upgrade from Chicago resident to President! #LastDance."

The rest of the series airing over the course of the next 2 Mondays...

So why not catch up with the first 6 episodes on Netflix now. Keep scrolling for everything else coming to Netflix this month...