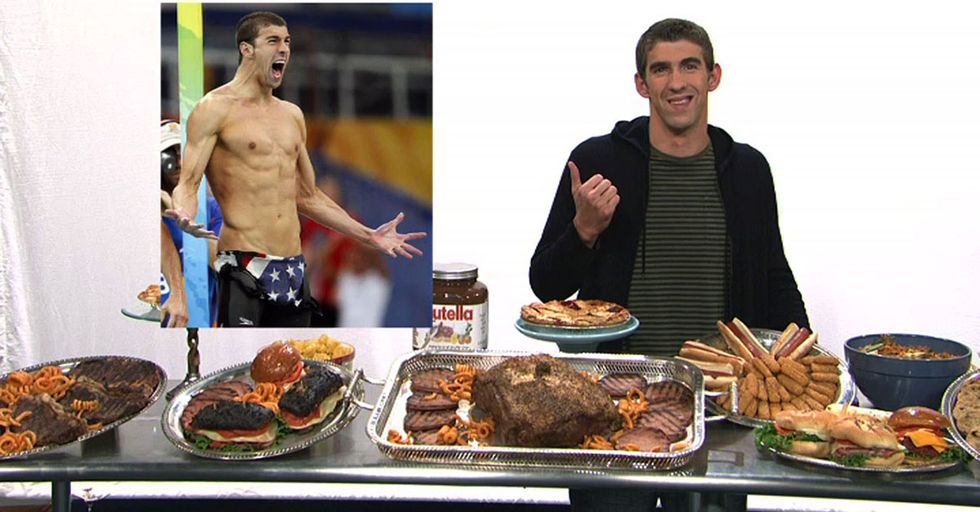 While Michael Phelps has made a name for himself by racking up gold medals consistently at the past four Summer Olympics, his body and diet have changed a ton since he started competing on the international stage.

As a world-class athlete, he spends the better part of almost every day training.

To fuel all that activity, he eats a lot more than we do (or should). If he didn't, he would actually get weak, slowing him down and jeopardizing his health. So he gets to eat a lot.

Sure, he claims he "doesn't eat many calories a day" and only eats "what he needs," but what he needs and what we need are two very different things.

Let's look at how his diet has changed over the years before we look to his latest, weirdest one.

In 2008, Phelps was much younger and had a more active metabolism. He was also training harder (by most accounts).

To fuel up, he would take down 12,000 calories per day. That's six times what normal people are supposed to eat. Of course, he was spending five hours a day, six days a week exercising.

Four years later, he laid off the calories a little, but as you can see, he was still taking down insane amounts of food. Maybe closer to 6,000 or 8,000 calories. It's amazing how much his diet changed just in this span.

That 2012 diet helped him tally up four golds and two silvers, so it seems like the change was a smart one.

As a quick aside: Phelps' diet is so ridiculous even when compared to other athletes' because swimmers generally burn more calories than any other class of athlete.

Here's 2016. Looks like he's burning a LOT of calories. And not just lean ones.

Since his metabolism has slowed down, he's going easier on the carbs, but he's replacing it with proteins and...fats. Sweet, sweet fats.

At a certain point, it's hard to even relate. If a regular person ate his caloric intake in rice cakes or tofu, they'd still gain weight, because it's just so much.

Not only does he get to eat a lot, but he eats to eat lots of good, greasy food, too.

His metabolism has slowed down, so he's actually eating what's best for this stage of his career. But it's hard not to wish we could join him for at least one burger-tastic meal.

Well, maybe YOU can't, Michael, but the rest of us don't exercise quite as much, so our waistline requires putting a limit on eating.