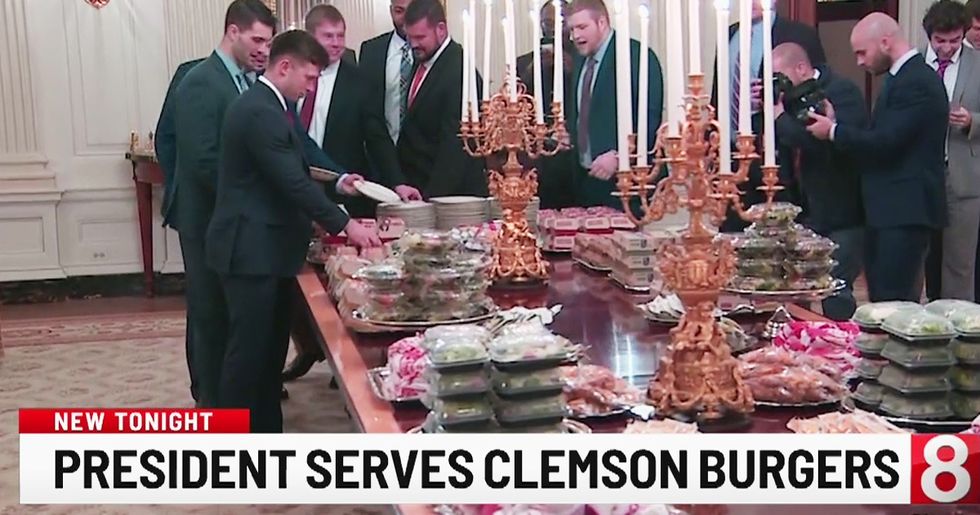 It's no doubt that the Trump White House has been plagued with scandal. No matter what side of politics you're on, you can at least agree Trump is the most controversial president we've ever had. Unless you consider tan suits and mustard controversial.

Sure he's hosted Miss Universe for a weirdly long amount of time, and probably thrown countless soirees at his various properties, but it seems like this might be the first time someone let him throw his own little party with no help. At the White House no less. So what happened?

Well, everyone knows how much Trump loves McDonald's.

I feel like every third article about Trump is about how much junk he eats. So it's really no surprise.

I mean, he was even in a McDonald's commercial back in the day.

"Together Grimace, we could own this town." Pence is just Grimace in a human suit confirmed.

But no one thought his love of a Big Mac would go as far as it did this week.

Sure, grab a McDonalds from the Executive Limousine on your way to the UN, but it's an entirely different matter when those never-frozen beef patties make their way to the White House dining room.

It all comes off the backs of furloughed White House Chefs, and not having anything to feed NCAA football champions, Clemson, when they visited 1600 Pennsylvania Ave.

Trump thought to himself, you know what these boys need? All of my favorite foods. So he did just that.

For the first time in White House history, the guests of honor were presented with a selection of the very best fast food Washington has to offer.

Including selections from McDonald's, Wendy's and Burger King.

The players were... surprised.

One player even remarked that he thought the food was a "joke." And honestly, it was a joke, just not an intentional one.

Here are some dipping sauces. I thought you would like them.

The official description of this photo reads, "This photo shows dipping sauces placed in silver trays to accompany some of the fast food the US president purchased for a ceremony honoring the 2018 College Football Playoff National Champion Clemson Tigers in the State Dining Room of the White House." And I think that's all there is to say.

They didn't order enough fries so they had to divvy them up in these cute little white house water cups.

They also had nothing to drink on hand. Maybe one of the players could have yelled, "Diet Coke please!" in their best Trump impersonation, and watched as three White House aides rushed in from all sides with a "cold one."

Trump went off to brag about his accomplishment on Twitter.

Did... did anyone notice that typo? Does he just not have autocorrect activated? I've typed hamberders 100s of times while writing this article and I've been corrected every time.

Burger King had a field day.

due to a large order placed yesterday, we're all out of hamberders. just serving hamburgers today.
— Burger King (@Burger King)1547570007.0

Along with, well, the rest of the Internet. Here are some of our favorites.

Trump as the hamburglar is something I didn't know I needed until this week.

I needed it so much, here it is again.

I'm lightweight surprised that Trump didn't try to cancel the Clemson visit and keep all this food for himself.

"I'd like to wash my hamberder down with a hot cup of covfefe."

Washington drive-thru window workers on red alert during the shutdown.

9Gag getting in on the fun.

People were worried that jokes about the president would get old, but he just keeps giving. What a kindness.

When you see a typo trending on Twitter, you don't even need to ask.

"Is this gluten free?"

No, but if you remove the buns, maybe it's keto?

It's only a tiny bit disrespectful.

But if you're telling me Taft wasn't munching on Big Macs in the Oval Office, I'm calling you a liar. That dude weighed over 300 pounds.

Here's a video of Trump explaining it all.

Because of course, he did.

Huck-a-Sanders weighed in as well.

Trump saying he's graciously paying for all this food himself is like when my broke, divorced dad used to brag about taking us to the park every other month. You can't brag about minimum effort.

And of course, as soon as word started spreading, offers from celebrities starting flying in.

I WANNA SHOW CLEMSON TIGERS AND POTUS HOW CHAMPS ARE SUPPOSED TO BE TREATED YALL WELCOME TO COME BY THE QC HEADQUA… https://t.co/j6cBblSvaH
— QuavoYRN (@QuavoYRN)1547587023.0

Here's Quavo Huncho (aka 1/3 of rap group Migos) inviting the Clemson players to his place for a proper meal.

Or cookbook author and wife of basketball player Steph Curry offering to host.

This invite sounds like a slam-dunk. *holds for applause, doesn't get any*

But then Michael Strahan showed up on GMA and blew the whole thing open.

Lobster? Caviar? How can I quickly disguise myself as a Clemson football player? Asking for a friend.

And he backed it up.

Seems like this might actually become real. Congrats to Clemson on the National Championship, and being able to squeeze a free meal out of every liberal celebrity in America.

But even Michael Strahan can get one-upped.

This is Michelin Star Chef, Nick Kokonas offering to host the Tigers at his restaurant. Step aside lobster and caviar, there's a new offer on the table.

I used to live in Chicago.

At a time when this restaurant was considered the best in the world.

I tried to go, but they're booked years out.

So seriously, this is a really special offer from an incredible chef.

I mean, wouldn't you rather have something like this?

Some weird art on a table that probably tastes like what that gas they give you at the dentist feels like?

A cold Big Mac and a half-serving of salty fries?

I know which one I'd want.

But in all truthfulness, I'm probably gonna go get McDonald's for lunch today, so maybe I'm the real loser.

But what do you think?

Is everyone overreacting? Or are the memes worth it? How much should we be embarrassed by this whole thing? Let us know!