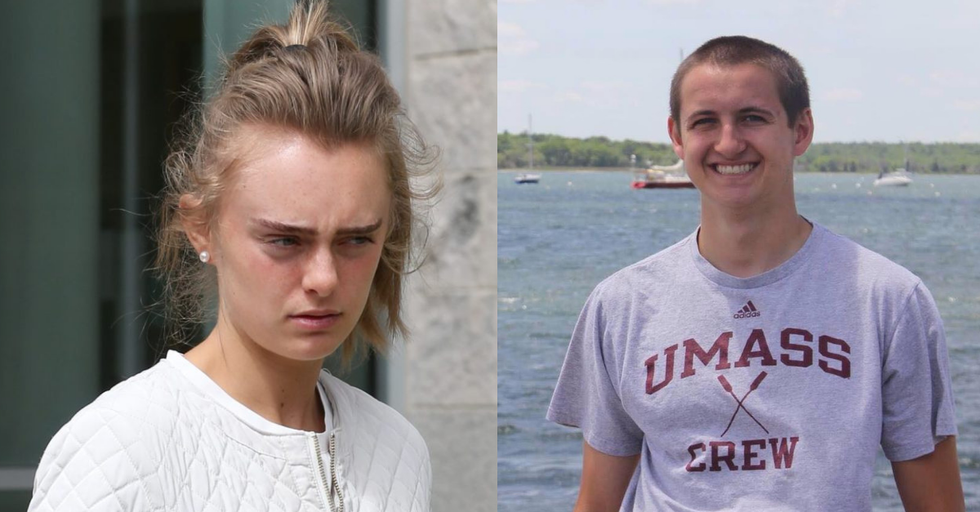 Michelle Carter Sentenced With 2.5 Years of Jail Time for 'Suicide-By-Text'

For many of us, we can't remember a time before texting. Having our cellphones in our hands 24/7 and being constantly accessible is something that this generation has become used to. When we hear about people who don't have smartphones, it seems a bit unfathomable. To think of a time when there was nothing but landlines feels archaic.

With all the convenience that texting and cellphones can bring, it's also a very bizarre phenomenon that can sometimes lead you into difficult situations. How many times have you accidentally sent a text to the wrong person? A text you'd prefer them to never see? Or how many times have you panicked over why someone never answered your text, and it pushes you into a panic attack of, "Why aren't they answering me?"

Cellphones have revolutionized our lives, there's no doubt about it. But for one young woman, her digital trail and text messages led to her being sentenced to jail time for her role in a suicide.

Roy’s suicide on July 13, 2014 was allegedly encouraged by his then 17-year-old long distance girlfriend, Michelle Carter.

You may know the case as the “texting suicide case."

Named Commonwealth v. Michelle Carter, the case involved trails of phone calls and texts at the time of Roy’s suicide.

At the time, Carter was about a month out of a psychiatric hospital when she reportedly “badgered" Roy into taking his life.

She will have to serve 15 months for her 2017 conviction.

The high court ruled that she is at fault for Roy's suicide.

BREAKING: A Massachusetts woman who was convicted of coercing her boyfriend over text messages into killing himself… https://t.co/tUeJEDmAFM
— HuffPost (@HuffPost)1549466104.0

According to the high court, “The evidence against the defendant proved that, by her wanton or reckless conduct, she caused the victim's death by suicide."

“Her conviction of involuntary manslaughter as a youthful offender is not legally or constitutionally infirm. The judgment is therefore affirmed."

While on the phone with Carter, Roy inhaled carbon monoxide in his Ford-250 truck.

The suicide happened in Fairhaven, Massachusetts.

Carter decided against a jury for her trial.

Judge Lawrence Moniz of the Bristol County Juvenile Court ruled that Carter was the cause of Roy’s death.

She told him to “get back in" his truck while it filled with the poisonous carbon monoxide fumes.

Carter’s words and texts were cited in her trial.

The court wrote the following:

“As the defendant herself explained, and we repeat due to its importance, '[The victim's] death is my fault like honestly I could have stopped him I was on the phone with him and he got out of the [truck] because it was working and he got scared and I f--king told him to get back in,'" the court wrote.

Her lawyers responded with a statement.

“We are disappointed in the Court’s decision," they said. “We continue to believe that Michelle Carter did not cause Conrad Roy’s tragic death and is not criminally responsible for his suicide."

Her lawyers also said they are exploring their options.

Which could include an appeal to the United States Supreme Court.

Carter’s sentence does not have a date yet.

Her team has an allotted 28 days to ask the high court to reconsider its ruling.

According to NBC News, the Bristol District Attorney’s Office will also need to head back to a lower court and have “the stay on Carter’s sentence revoked."

There is a long road ahead, but Bristol County District Attorney Thomas M. Quinn III is pleased with the high court’s ruling.

Quinn released a statement regarding the high court’s ruling.

“This case is a tragedy for all of the people impacted by this case," Quinn said.

“As the court stated, the defendant herself admitted that she caused the death of Conrad Roy by her own conduct."

The defense team also looked to the American Civil Liberties Union of Massachusetts.

They argued that Carter’s actions were free speech, protected by the First Amendment.

Carter’s lawyers also argued that nobody can be convicted of manslaughter for just telling or encouraging someone to inflict harm upon themselves.

However, the state Supreme Court cited three cases in which those defendants were found responsible for “encouraging a suicide."

The court released a statement: “In sum, our common law provides sufficient notice that a person might be charged with involuntary manslaughter for reckless or wanton conduct, causing a victim to commit suicide."

“The law is not unconstitutionally vague as applied to the defendant's conduct."

Civilians are speaking out about the ruling on Twitter.

Some are passionate about defending Carter.

Roy's family is speaking out as well.

Roy's aunt spoke out about the conviction.

Some are unsure of how to feel about the ruling.

"I don't think I'm okay with this," one Twitter user wrote, with a link to an article about the case.

In regards to the case, it is reported that at first, Carter wanted Roy to seek help.

But, "as the victim continued researching suicide methods and sharing his findings with the defendant, the defendant helped plan how, where and when he would do so, and downplayed his fears about how his suicide would affect his family," the court wrote, as reported by The Washington Post.

One text read, “I thought you wanted to do this. The time is right and you’re ready, you just need to do it!"

He was having doubts about his suicide. The pair talked about how to do it, including carbon monoxide poisoning.

The case raises a lot of questions.

A criminal law professor at Loyola Law School in Los Angeles, Laurie Levenson, told the Washington Post that this particular case does not set a legal precedent.

It asks a question, instead...

“When does bullying cross over into committing a homicide?" Levenson said.

According to Suicide Statistics and Facts, "Suicide is the 10th leading cause of death in the US for all ages."

Over 44,000 Americans die by suicide each year.

It's a harrowing, tragic statistic.

If you or someone you know is looking for help or needs to speak to someone, please call the National Suicide Prevention hotline at 1-800-273-8255.