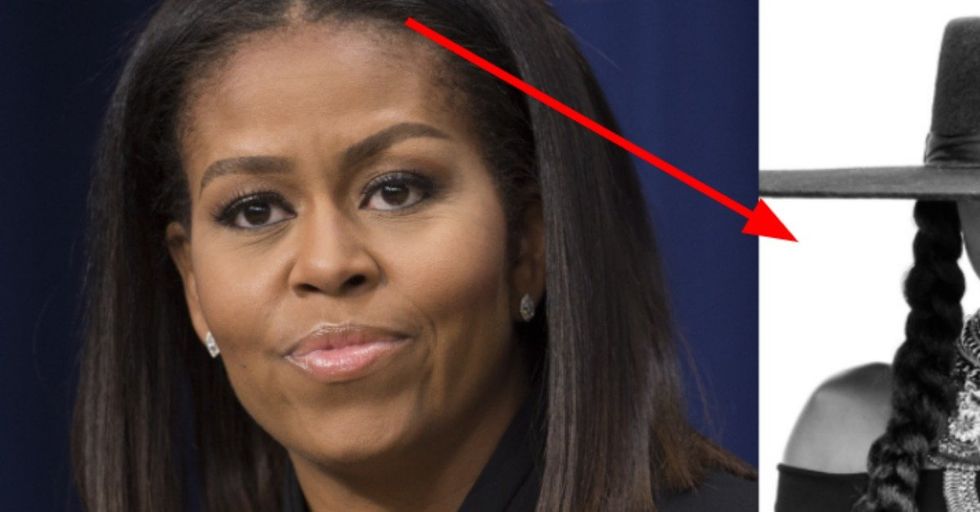 Yes, there is more than one queen.

So when Michelle Obama (along with a bunch of other celebrities) dressed up as Beyoncé from her "Formation" video, the world collectively gasped for a moment.

They totally nailed it.

Beyoncé was an icon long before the video for "Formation" reached the Internet.

But once it traveled into our eyes and ears, we were hooked. And Beyoncé's incredibly fierce look from the video — the wide-brimmed hat, dark lipstick, long braids, and elaborate neck jewels — became a symbol of women's strength and power.

Now, you can find it everywhere.

And it was Beyoncé's 36th birthday on September 4, so what better way to celebrate this larger-than-life woman than with a celebrity tribute?

As you probably know by now, Beyoncé and Michelle Obama are friends.

It's the greatest thing ever. They're both incredibly powerful forces of good in the world.

When they get together, nothing can beat them.

So for Queen Bey's birthday, Michelle Obama took part in an amazing celebrity tribute to her. Obama and a bunch of other awesome women recreated Beyoncé's "Formation" look, and the results are incredible...

Take a minute. Catch your breath. We know. This is amazing.

Beyoncé's little one also participated! The pictures are available to view on Beyonce.com, and they were posted in conjunction with Beyoncé's effort to raise money for Hurrican Harvey relief efforts. You can donate right on her site.

Even Destiny's Child alum and Bey's OG BFF, Kelly Rowland, was part of the project.

Don't think they forgot about the third Destiny's Child member. Reunited again, this time in formation. But they weren't the only awesome women to take part in the project...

Another strong-as-hell woman, Serena Williams, transformed into Beyoncé in honor of her birthday. Check out the website to see the rest of the photos.

And as always, people are (rightfully) super jealous of Bey and Michelle Obama's friendship.

Could you imagine being involved in this hug? Probably not because you'd faint from being enveloped in too much beautiful strength.

This guy summed it up best:

The Queens of the World came together to celebrate Bey's birthday and raise money for a good cause. How much cooler can you get?