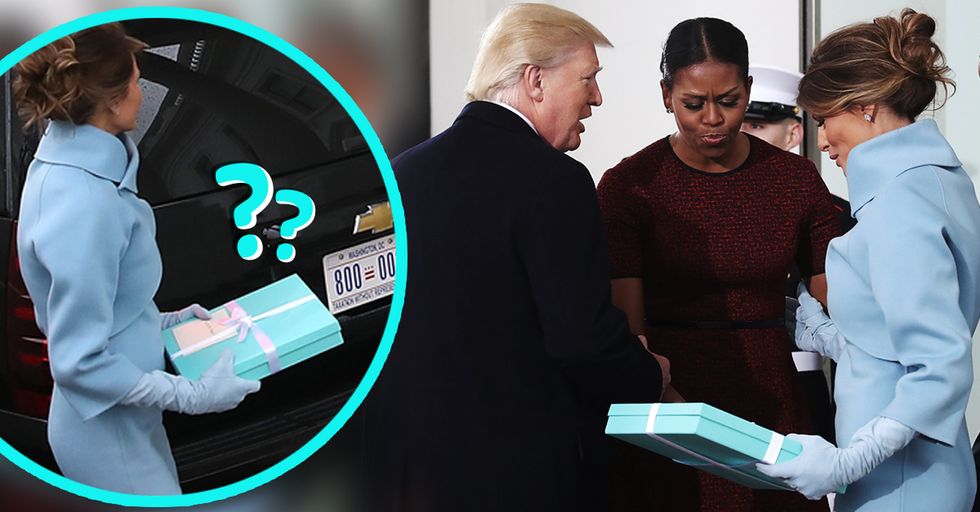 There are a lot of questions we've been asking ourselves since Donald Trump's Inauguration on January 20 of last year. Things like, "How did we let this happen?" and "Is this real life?" and "WHYYYYYYYYYYY?!"

But on the less serious front, we've also been dying to know exactly what was in the Tiffany box that Melania Trump gifted to the Obamas.

I can't answer those first questions for you, but I can answer that last one.

Ah, the Inauguration. What a day!

It was a day filled with an odd sense of unease (but not filled with people, contrary to Trump's opinions and "alternative facts"). But it was also filled with *~*MYSTERY*~*

Here we see Melania moving toward the Obamas with the box in question. It's clearly from Tiffany, but what could it be?
The package in question was the topic of much discussion last year, mostly because of the awkward way it was handed off. It seems like the Trumps weren't expected to bring a "welcome back to civilian life" gift, and Michelle Obama clearly had no idea what to do with the thing.
Luckily for her, her husband stepped in to save the day. He took the package from her and brought it back inside. Trump, for his part, stayed out of the way. (Which makes sense, given his apparent aversion to things named Tiffany.) Man, that Obama guy sure knows how to handle a crisis (no matter how small). Notice how he didn't start bragging about the size of his button or anything ridiculous like that.

The interaction ended up being just fine, but we were all left wondering:

What was in that box?! Jewelry? Keychains? A scrapbook documenting the history of Trump's severely racist Birther Movement? Well, Michelle Obama recently appeared on the Ellen and revealed exactly what was inside...

It was a picture frame!

Possibly even the picture frame pictured above! (I'm not sure exactly which Tiffany frame Melania brought, but I like this one with a bow, so I'm going with it.)
So, there you have it, folks! That's one Inauguration Day mystery you no longer have to worry about.
Some people apparently guessed it was a picture frame all along! But isn't it nice to have the vindication?

She breaks down the entire interaction. She also talked about what her life has been like post-White House.
Although I'm happy to have an end to this particular mystery, I can't help but have one more question: What picture did the Obamas put in the frame?