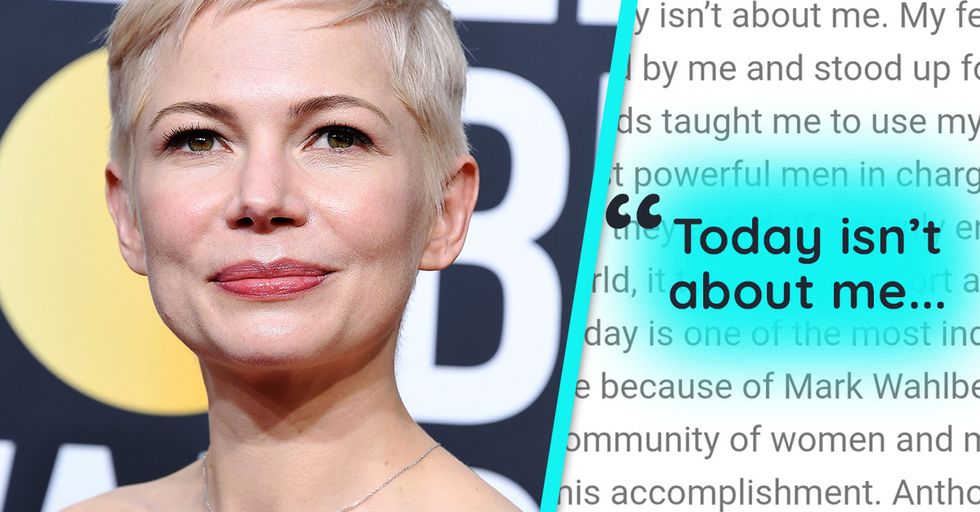 Michelle Williams Appreciates Mark Wahlberg's Donation, but We're Not Ready to Applaud Yet

I don't know of a single person who's actually seen All the Money in the World, but it seems like everyone has something to say about the movie. Or, to be more specific, they have a lot of thoughts about the circumstances surrounding the film.

I'm guessing director Ridley Scott was probably hoping for his newest film to feature in headlines in a slightly different light, but hey — no publicity is bad publicity, right?

Last week, it was revealed that there was gigantic disparity between the payment Michelle Williams received for the film's reshoots and what Mark Wahlberg received.

In case you missed it, Williams received less than one percent of what Wahlberg did. William's pay came out to approximately $1,000.

Wahlberg's was $1.5 million. When that news came out (literally in the same week that those #WokeGoldenGlobes occurred), many of us took a collective deep breath and said, "yiiiiiiiikes."

Williams and Wahlberg — along with the rest of the film's cast and crew — agreed to come back for re-shoots after it was revealed that Kevin Spacey (who originally had a role in the film) had a history of sexual abuse. Canadian actor Christopher Plummer replaced Spacey.

Unfortunately, it seemed like removing a sexual predator from the film hadn't fixed everything. (Weird. It's almost like there's a systemic issue that needs addressing). It was only more salt added to the wound to find out that in addition to Williams and Wahlberg making such wildly different amounts of money, they are represented by the same talent agency.

As the vitriol mounted against him, Wahlberg eventually decided to donate the money he'd received for the re-shoots to the Time's Up legal defense fund. Here's his statement on the matter:

"Today isn't about me," she began.

She then went on to thank the actresses who stood up for her after the news of the pay gap came to light, commend Wahlberg for his donation, and thank Anthony Rapp for coming forward in the first place to share his experiences with Kevin Spacey. As Williams rightfully points out, it's not enough to simply say you support those who want to change the world for the better; it requires action.

Now, here's the thing. I think it's great that Mark Wahlberg donated $1.5 million to Time's Up. Buuuuuuut...

I mean, he has a lot of money. And there's a pretty good chance that, had the general public not been made aware of that $1.5 million, he would have just kept it. You could easily make the argument that he was essentially peer pressured into making the donation.

And we also can't ignore the fact that now that he's made this donation, people are praising him like crazy. He managed to flip the conversations about him from casting aspersions to straight-up praise. Sure, something being done primarily for "good PR" purposes doesn't make it less good. But it does cast a bit of a shadow on the whole situation, no?

Obviously, the entire situation is pretty nuanced and multilayered.

Wahlberg performed extra work and therefore should have received extra pay. But there's just no way to come out of the situation looking like the good guy when you received more than 1,000 times as much money than one of the stars of the film. Unless you donate it.

There's also the fact that Wahlberg is, in fact, a larger box office draw than Williams.

Like I said, there are a lot of layers to this one. Is Wahlberg's success indicative of sexism within the movie industry, or simply something he's achieved based on his talents? Is his donation less impactful if it was primarily influenced by the need for positive spin? What about the talent agency? What should they have done differently? It seems like these are definitely important questions to be asking, so regardless of how you feel about Wahlberg's donation (and Williams' response to it), this will hopefully kickstart a larger conversation about solving even more issues within the entertainment and other industries.