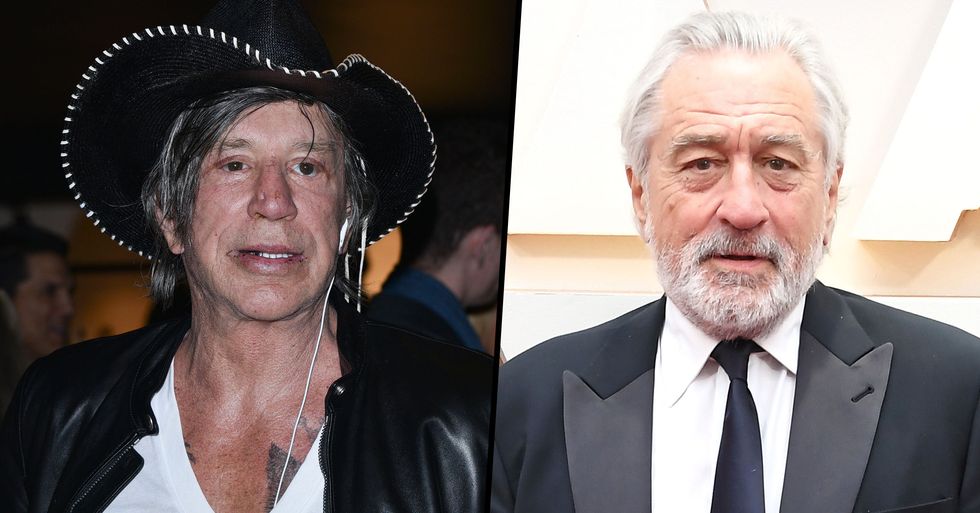 Mickey Rourke has reignited a decades-old feud with actor Robert De Niro, putting him on blast in a fiery social media post...

Mickey Rourke has come for Robert De Niro once again.

And he really didn't hold back.

The pair have been feuding for years...

Rourke and De Niro have been feuding since an alleged snub on the set of the 1987 film. But this is definitely the worst yet...

While later in his career he became known for playing comical depictions of grumpy old men, De Niro rose to fame for playing not so likable characters.

The actor was raised in a creative household.

De Niro is the son of 2 Greenwich Village artists, who were widely respected in the art industry.

So, it's no surprise that a teenage De Niro would seek a career in the arts.

After appearing in a string of stage shows as a child, the star dropped out of school at age sixteen to study at the Stella Adler Conservatory of Acting. With his mother's permission, the actor-to-be took the money she had saved for college and put it toward launching his acting career.

But it very nearly didn't happen.

At first, it seemed performance wasn't all that appealing to De Niro. After being accepted at New York's prestigious High School of Music and Art aged 10, the star reportedly felt overwhelmed and unprepared for the intense and competitive nature of the industry, and switched to a standard public school after just a few days.

The star joined a pretty tame Italian street gang that dubbed him "Bobby Milk," believed to be in reference to his pale complexion.

While he still wasn't much of a troublemaker...

His time in the gang no doubt laid down his roots for being able to skillfully portray Italian Mobsters on the big screen.

At the start of his acting career, De Niro went on to appeared in several minor films

But it wasn't until his performance in Bang the Drum Slowly in 1973 that he gained real mainstream success.

That same year, De Niro starred in Mean Streets, marking his first collaboration with director Martin Scorsese, with whom he would do some of his most celebrated work.

He was widely considered to be one of the best actors of his time.

After seeing his work, director Francis Ford Coppola, whose movie The Godfather had bagged the lucrative Academy Award for best picture, got in touch.

Coppola offered De Niro the iconic part of Vito Corleone in The Godfather, Part II (1974) - a role that earned him a best-supporting actor Oscar and firmly cemented him as an international star.

De Niro's success streak continued as we entered the '90s.

The star opened the decade with Goodfellas, yet another acclaimed gangster flick from Scorsese.

Even in recent years, the star has continued to feature in box office smash hits.

But as we made our way through the '00s, the actor's work took a bit of a change in tone.

We saw him move away from gangster cinema...

In 2012, we saw De Niro play the father of a mentally ill man in  Silver Linings Playbook, followed by comedy The Big Wedding and The Intern in 2013, to name a few.

But last year, we saw De Niro go back to his roots in Scorsese's The Irishman.

Set in the '50s, the movie follows truck driver Frank Sheeran who gets involved with Russell Bufalino and his Pennsylvania crime family.

And it was a roaring success, even going on to earn the title of the best movie of 2019.

But this week, the acting legend has been put on blast.

Mickey Rourke took to Instagram to slam the star and it's pretty brutal, to say the least.

Rourke threatened to “embarrass" De Niro over a quote from his spokesperson last year.

"Hey Robert De Niro," Rourke wrote in an Instagram post on Friday. “That’s right I am talking to you, you big f***ing crybaby."

"A friend of mine just recently told me that a few months back you’re quoted as saying to newspapers ‘Mickey Rourke’s a liar he talks all kind of s***'."

Back in September, Rourke claimed on an Italian talk show that Martin Scorsese wanted to meet with him for a part in The Irishman.

But, he was dropped when De Niro allegedly refused to work with him.

The comments forced De Niro's rep to speak out at the time.

They said that Rourke was “never asked" to be in The Irishman and that he was "never even thought of, discussed, or considered to be in the movie."

"Listen Mr.Tough Guy in the movies, you’re the 1st person that ever called me a liar and it was in a newspaper."

He then made some serious threats...

"Let me tell you something, you punk ass, when I see you I swear to God on my Grandmother, on my brother and all my dogs, I gonna embarrass you severally 100% [sic]." Yikes.

“Mickey Rourke, as God is my witness."

For more on De Niro, keep scrolling to see what he's had to say about Donald Trump.