Microplastics Found in Human Poop for the First Time | 22 Words 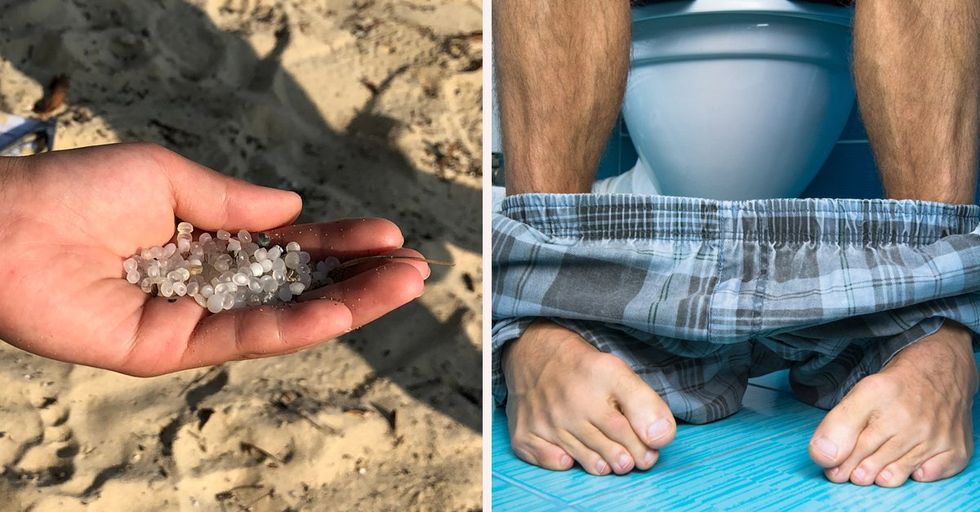 Microplastics Found in Human Poop for the First Time

Microplastics. What are they and why is there so much buzz about them? These tiny plastic particles have evolved from the degradation of larger plastics, amounting to only 5 millimeters in size – roughly the size of a sesame seed.

But these tiny players spell big trouble – microplastics have been found in the tissues of whales and sharks, impacting their hormonal system and preventing them from absorbing nutrients properly. They also have been found inside of plastic water bottles, which clearly demonstrates that our definition of “pure water” is misleading.

And now, researchers have identified microplastics in the human organism. Scientists are working to predict and stymie the widespread impacts of these plastics on our health, agriculture, and ecosystem. Learn how plastics are made and how they degrade, how they enter our food and water supply, and most importantly, how to protect yourself.

Researchers from the Medical University of Vienna and the Environment Agency Austria conducted a pilot study on eight individuals from around the world, including Finland, Italy, Japan, the Netherlands, Poland, Russia, the UK, and Austria. Before providing their stool samples, each participant kept a food diary for one week.  750 milliliters of water from plastic bottles were consumed over that week, and everyone recorded exposure to plastic wrapped foods, and six recorded exposure to seafood. That seems like a routine diet, right?

All of the eight participants in the study showed microplastics in their poop. Yes, all eight. The researchers tested for eleven types of microplastics, including propylene (PP) and polyethylene terephthalate (PET), both of which can be found in common items like textiles and plastic bottles. To the team's surprise, they found nine out of the eleven.

What does that mean?

Well, we don’t exactly know. Scientists are calling for further research, but it’s likely that the pervasive exposure to plastics in our environment isn’t good. Particular plastics, such as phthalates, are known hormone disruptors, and although it appears that they can pass through our system, the long-term effects they have on our bodies aren’t well understood.

Future research on this subject will include more participants from more countries, a more extensive list of plastics tested, and more detailed parameters to contextualize the stool results. It’s also necessary to collect long-term data on the issue, as other research points to microplastics' ability to alter the fetal environment in utero.

How Did We Get Here?

Let’s go way back in time because, why not? The use of natural plastics dates back to 3,500 years ago when the Olmecs of Mesoamerica created latex balls from the sap of gum trees. From there, plastics hit the scene with mid-19th-century synthetics. Alexander Parkes introduced Celluloid, a compound made from camphor and nitrocellulose, that was used as film stock material in the movie and photography industries.

The term “plastic" is a generic way to describe a class of materials that is defined by its moldability and durability. We’ve come a long way from Celluloid– now there are hundreds of types of synthetic plastics available, each with a different purpose.

How is Plastic Made?

The vast majority of plastics today are made from fossil fuels, including crude oil and natural gas. This method is cheaper than producing plastics from plants, but it’s led us down a precarious path.

Step One: Get Pumped

Plastic creation begins with pumping crude oil, and natural gas from the ground and sending it to a refinery. From here, the factory makes the chemical building blocks of plastics: ethane from crude oil and propane from natural gas.

Ethane and propane are then sent to what’s called a “cracker plant," where these compounds are broken down further, creating ethylene and propylene.

These two polymerized compounds create a resin and are cooled down and chopped up for future use. These little plastic grains, or "nurdles," are shipped out to factories to be molded into their ultimate product.

Doubling by the Decade

The ubiquitous utility of plastics has made them a popular commodity. In fact, the use of plastics has doubled every decade since 1950. This means that in nearly 70 years, the world has produced roughly 9.2 billion tons of plastic, of which scientists estimate only 9% was recycled. Scared? Well, you should be.

One of the most common contributors to the plastic problem is what’s called single-use plastics, or all the plastic items we use once and throw away. Think water bottles, takeaway silverware, food wrapping, and grocery bags. These end up clogging waterways and damaging wildlife. If you want to get a grasp on how bad this can get, take a glimpse at Midway Island.

So, it’s clear that plastics are unsightly and unsafe, but what about microplastics? How are they formed and if we can barely see them, how bad can they really be? To answer the first question, microplastics can start small or they can be created by the gradual erosion of larger chunks. Plastic takes hundreds of years to fully degrade, meaning the output of plastic far outweighs its elimination. In fact, it’s been estimated that anywhere from 93,000 to 236,000 of metric tons of microplastics are in the world’s oceans today.

Boys Will be Girls

Since these plastics are so small, they have the ability to infect a number of environments – from the exterior of coral reefs to the interior of human GI tracts. Human studies have found correlation in the concentration of maternal DEHP metabolites in urine and decreased anogenital distance, penile width, and testicular descent. In other words, plastics can feminize males, making them infertile.

Bisphenol A, more commonly referred to as “BPA" is a known toxicant and one of the more well-studied plastics in a human setting. Urine levels including BPA are connected to increased cardiovascular disease risk, type 2 diabetes, and abnormal liver enzymes. Though many companies label their products as "BPA free," they do not fully alter the compound to omit Bisphenol A.

A Form of Birth Control?

The plastics that lower testosterone and other masculine markers in men also have an effect on women. For example, scientists have completed mice and animal studies, exposing their female subjects to doses of BPA that an average human may encounter in the wild. The results were clear: BPA exposure was associated with reduced fertility. Specifically, the ovarian follicles, which hold the egg were fewer and smaller, and that estradiol was not being produced at expected levels. Of course, these are animal studies and one could argue not directly comparable to human studies, but I’m not going to hedge my bets on that.

Tetrabromobisphenol a – try saying that 5 times fast. TBBPA is a flame retardant contained in many different types of plastics, including those found in microcircuits and even mattresses. This chemical is correlated to a bevy of hormonal dysfunctions, including thyroid balance, pituitary function, and that all-too-familiar infertility factor.

Okay, so you are coming to realize how prevalent plastics are in our environment. From our clothing, gadgets, sprays, and even upholstery– they’re difficult to avoid. PCB chemicals were even used during the construction of many cities’ water systems and now multiple city governments have chosen to sue the company that manufactured and sold them their poison (i.e. Monsanto). They can contribute to a range of immune reactions, skin conditions, infertility, and compromised cognitive and motor abilities.

The list of suspected and known dangerous plastics could continue, but let’s take a look at how you can take steps to protect yourself, as well as cover some developing technologies designed to combat this morose issue.

You can choose how extreme you want to go with this approach, but it’s smart to reduce your plastic purchases as well as uses as much as possible. Try switching out your plastic food containers with glass ones, using reusable bags at the grocery store, and avoiding personal care products and cosmetics that contain plastics or plasticizers such as phthalates.

Depending on how much money you want to invest in this issue, you might want to consider buying a heavy duty water filter for your shower and drinking water. Of course, anything is better than tap water, but buying a more comprehensive water filter can only help.

Every plastic item can tell you a lot about how it was manufactured. Glance at the chasing arrows on an item and you’ll see a number, one through seven. This relates to the type of plastic the product is, as well as how it was made. There are plenty of numbers to avoid, including numbers 3, 6, and 7.

Whenever possible, buy foods that don’t come prepackaged or in erroneous wrapping. You may be surprised how much longer it takes you to fill up your trash every week! Also, consider buying bulk and shopping in person, instead of online, to avoid excess package waste.

Apart from the steps, you can take, researchers and environmentalists, are investigating large-scale technologies that could save us from the Frankenstein we created.

After stressing the importance of preventing plastics from entering the food supply, it may sound ironic that eating plastics is one of the foremost solutions to the problem. Mealworms and Waxworms have both been shown to digest and compost plastics, which may provide a low maintenance and low-cost solution to our woes.

A single one, to be exact. Ideonella Sakaiensis is a newly discovered microbe that is able to accelerate the rate of plastic degradation from hundreds of years, to a couple of days.

There are also technologies that think big – like the one that Boyan Slat created for his Ocean Cleanup Project. It capitalizes on the ocean currents to propel it and uses a wide, weighted net to collect trash in the water. This trash is meant to be brought back to shore and recycled into consumer goods.

Yes, it’s shocking, I know. But to keep up with changing consumer demands, more and more companies are going “green." This means that instead of making one-time use silverware with synthetic plastics, they’re using plant resins. Or still, others are making latex gloves or other products by reverting back to the erstwhile gumtree.

Although I’m in full support of consumer knowledge and protecting the health of our ecological communities, I’m also an advocate for staying sane. Plastic is unavoidable so don’t stress every last detail and try your best – afterall you have a life to live.