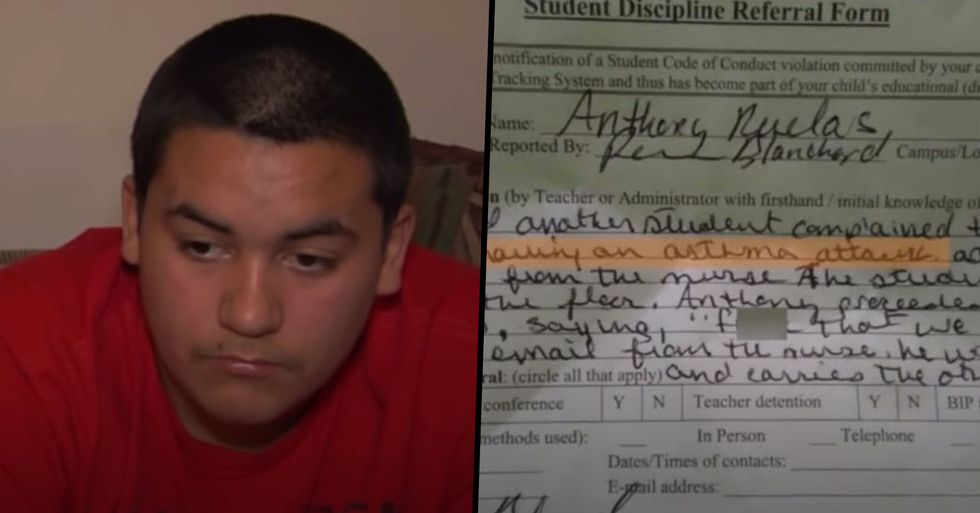 A middle school has suspended a student who decided to use his quick thinking skills to carry a girl to the nurse's office because she was having a severe asthma attack.

Read on for all the heartbreaking details of this story...

Schools have general rules in place to protect students.

And they are urged to follow them no matter what the circumstance is.

From fire drills to uniform restrictions, these rules have been well-thought-out.

But, of course, not all situations can be prepped for.

And that's exactly what happened at Gateway Middle School.

A student was having a severe asthma attack when another student decided to "break the rules" in order to save her life.

But with the pandemic still going strong, these rules aren't just the typical ones anymore...

We've all been trying our best to get back to normality, but with the virus still spreading, it seems like it's going to be more difficult than we originally thought.

In lots of states, it has become mandatory to wear a face mask on certain occasions.

And this includes in schools.

This is why some schools are not forcing their students to wear them.

But that could potentially come with other risks, especially in crowded hallways and classrooms.

Other rules include reducing the number of students in classrooms.

And even dictating where the students can go and at what time.

Although, some schools are stricter with this than others.

This includes Gateway Middle School, who recently hit the headlines after they punished a student for "breaking the rules" when he was just trying to save another student who was having a severe asthma attack.

It all started when Anthony Ruelas saw his classmate suffering.

A girl in his class started wheezing and coughing and Anthony immediately knew she was having a hard time breathing.

And even though the teacher could also see what was happening, they forbid anyone to leave the room.

Their solution was sending an "email" to the nurse and waiting for a reply... What? They also told all the other concerned students to "remain calm" while they all waited.

But when the girl fell out of her seat and onto the floor, Anthony decided enough was enough.

After uttering "F*** that, we ain't got no time to wait for no email from the nurse," he grabbed the student and carried her all the way to the nurse's office despite the teacher's command.

But rather than thanking the student for potentially saving another student's life, the teacher wrote him up.

In her report, she stated that Anthony had broken the rules and even quoted what he had said before carrying the student out of the classroom.

The School's District Head decided to make the call to punish him.

Anthony was suspended for 2 days and his mother was outraged at the news, as was he, stating: "I was like 'what'? Am I suspended for this? Like I was trying to help her."

His mother also added that he will not be going back to that school even after his suspension is lifted.

Once the news went viral, others also joined in on that outrage, citing that "common sense" should outweigh "school rules."

Did common sense die or did the girl have to before this teacher realized that there was a serious issue?

His mom emphasized that she will be teaching her son from now on.

Here's the full story for you to see:

Let's hope the school realizes there's more to life than following "rules." Keep scrolling to see how students are finding the adjustment back to reality...