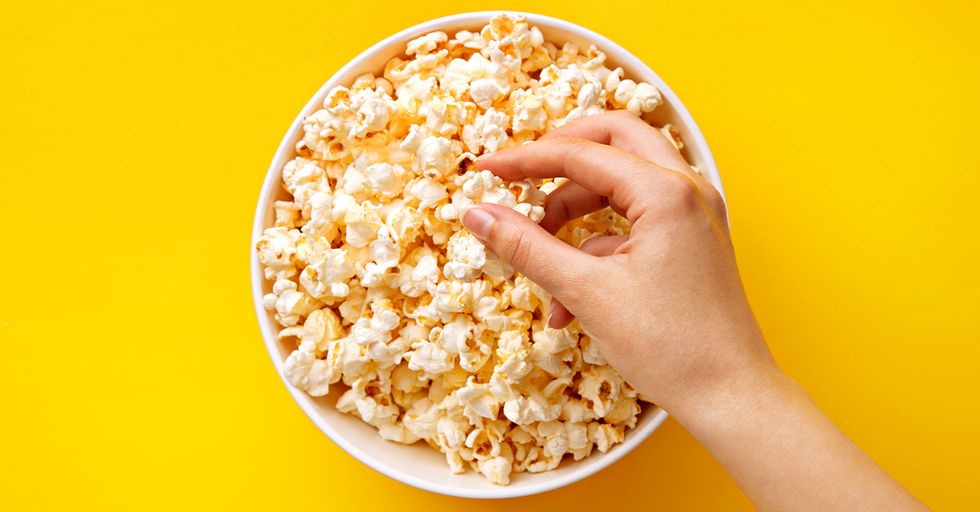 18 Midnight Snacks That Are Secretly Healthy but Taste Amazing

Binge-eating, constant grazing during the day in addition to meals—those are examples of snacking that we all know we shouldn’t do.

But snacks are not inherently unhealthy, and should absolutely be used to sustain you if you’ve had a busy day, ate dinner early, or just need something to munch on during a movie.

So if your stomach is rumbling late at night, don’t force yourself to sleep because it seems "too late."

Instead, eat something that benefits your body as well as satiates it.

Eating healthy doesn’t have to be hard.

Greek yogurt is another high-potassium snack you can indulge in. Throw in some fresh berries and almonds, walnuts, or whole grain cereal to complete the parfait. Honey is also a great way to sweeten the treat!

Yep, dark chocolate (in moderation, of course) is actually good for you. It’s got fiber, iron, magnesium, antioxidants, and it’s linked to improved heart health—all with a delicious flavor. Melt about an ounce dark chocolate and toss in a quarter cup of mixed nuts for a snack. As mentioned above, though, don’t make dark chocolate an every day thing. There are plenty of other snacks to try!

Banana with peanut or almond butter

Bananas make for a super easy snack, and they’ve got a ton of potassium (which is great for you). Spread a tablespoon or two of peanut butter—or almond butter, which is even healthier—on the banana, and you’ve got yourself a midnight snack.

Or, alternatively, split a banana into three or four pieces, and freeze it. Melt two teaspoons worth of dark chocolate, and dip the banana-popsicles in it for a delicious, healthy dessert.

Nothing wrong with going back to basics! Choose 1/2 to 3/4 cup of high-fiber cereal and half a cup of milk for this late night snack.

Simply cut up an apple, grab a tablespoon of almond butter, and snack away.

If you’re craving a popsicle but don’t want all that processed sugar, toss grapes in the freezer for a healthier—and easy—snack. (You can do this with other berries if grapes aren’t your thing.)

Popcorn is a great snack; it’s high in fiber and doesn’t have a lot of fat in it. A one-ounce serving has protein, fiber, and contains about 110 calories. The trick is not slathering it in all that butter. If you don’t like popcorn plain, try sesame oil instead!

Again, this snack-staple is a pretty common one. Just use whole grain crackers and about an ounce of sliced cheese for this snack.

There are a couple of variations on toast to try:

For one easy snack, just grab some whole grain toast and a tablespoon of peanut or almond butter.

For the second, you can try whole grain toast with a tablespoon of low-fat cream cheese and topped with dried cranberries.

Get your stereotypical Californian on with half an avocado spread over a piece of whole wheat toast. Add a little salt and pepper, and your snack is all set!

Try a half-cup of low-fat cottage cheese, with your favorite vegetables for dipping.

A small bowl of plain oatmeal with berries and skim milk makes for another quick, healthy snack.

Grab a servings’ worth of hummus and toast a whole wheat tortilla with your skillet for a light and easy snack.

If you’ve eaten plenty and are really just thirsty, consider drinking tea. If you’re genuinely hungry, make yourself a snack—and wash it with some tea anyway. Win-win! Tea has a ton of health benefits in it, and it’s a perfect calming drink to get you settled down before bed.

Of course, you can experiment with midnight snacks of your own.

All you really have to do is keep in mind the elements of each snack that make them healthy— a balanced combination of complex carbs like whole grain bread, foods with high protein, and fruits and veggies are what you should aim for in a healthy late-night snack. Share this with your friends on Facebook who are always looking for a healthy late-night treat!