Mike Huckabee Tried to Make a Joke About the NFL Protests — Instead, He May Have Just Proved the Protestors' Point | 22 Words 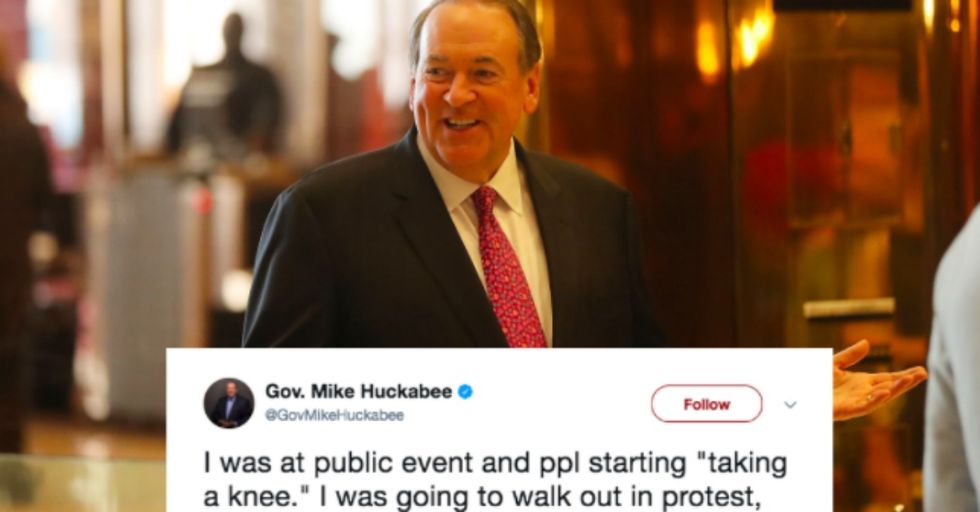 Mike Huckabee Tried to Make a Joke About the NFL Protests — Instead, He May Have Just Proved the Protestors' Point

They're often mighty awkward "dad jokes" without much of a punchline.

Huckabee tried to deliver a chuckle nugget about the NFL #TakeAKnee protests. Unfortunately for him, and fortunately for us, this joke didn't quite stick the landing.

So... Is the thing that Mike Huckabee is so clueless that he literally didn't know where he was? The joke comes across as being about how reactionary people have been to the concept of kneeling lately. It sounds like he's taking the side of the protestors. But he can't be... He's Mike Huckabee. This is all very unclear.

TV writer Jess Dweck was quick to point out that what the joke actually says is literally the opposite of its intention:

Mike Huckabee is so bad at jokes he accidentally made the opposite point and proved why kneeling is respectful https://t.co/1IM8w1ux9Q
— Jess Dweck (@Jess Dweck)1507615613.0

Mike Huckabee tried to make a joke disparaging the #TakeAKnee protest, but instead, he just proved that taking a knee is an act of respect and reverence.

It's remarkable, and 22 Words has actually obtained exclusive footage of Mike Huckabee himself trying to explain what his joke actually meant:

OK, that's not really Mike Huckabee. But that's how he must be feeling after self-owning himself so hard. We have no doubt that this won't be Huckabee's last joke attempt, however, so we'll catch ya on the next one, Chucklebee.