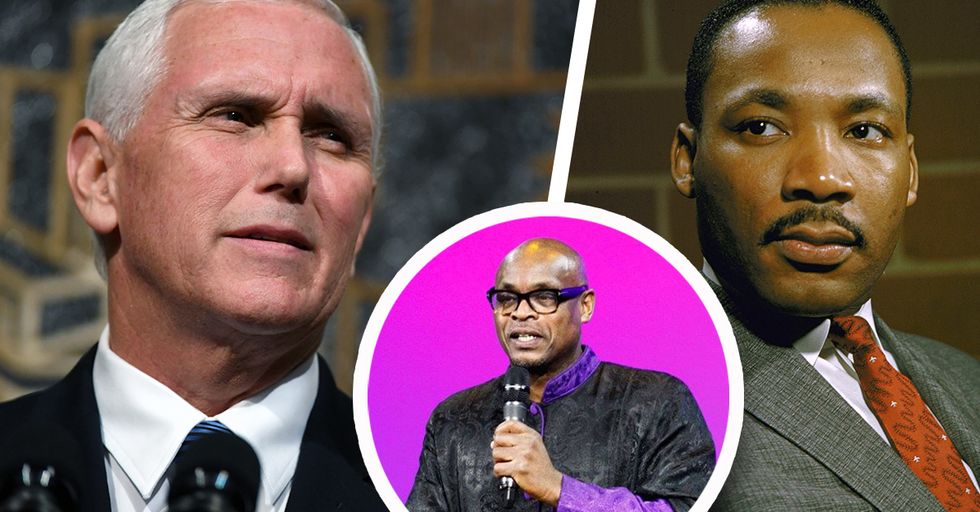 Did you hear? Yesterday was Martin Luther King day, a day of service and deep, emphatic reflection on how we have moved forward as a nation.

Normally, MLK Day is filled with fiery speeches about civic duty coupled with glamour shots of politicians (the President in particular) at such noted political watering holes as black churches, homeless shelters, and your neighborhood's fancy putlock dinner.

This year, however, is as far from normal as possible. For one, we have Donald Trump in office, and on MLK Day, a day we all know Trump could care less about, he showed his love of community service by helping himself to an hours-long golfing session.

His surrogate, noted purveyor of false outrage, Mike Pence, was more than glad to step in. How, you ask? Well, my dear friend, let me tell you. You see, Mike Pence spent MLK Day at a black church.
Right? That was exactly my reaction too. First of all, I'm shocked Pence even knows the location of a black church, secondly, I'm shocked he actually had the bravery to go to one.

Okay, well maybe not shocked. Now that I'm thinking about it, it makes sense Pence would go to a black church on MLK Day. He is a politician after all, and what is a politician if not a stuffed bag of bravado and deception.

Furthermore (and this is pure speculation here) I highly doubt Pence has black friends. After all, this is a guy who walked into an NFL game with the express purpose of storming out, thereby costing tax payers $242,000 for his stunt, not to mention the estimated $14,000 it cost the local police.

Any black friends Pence had would have dropped him at that moment, if they'd ever picked him up in the first place. Again, this is a guy who "hates Muslims,... hates gay people, and ... hates minorities. He didn’t want to be the first white man in Indiana to pardon an innocent black man."
This is according to Keith Cooper, a man who spent nine years in prison for an armed robbery he didn't commit. Though he was clearly innocent, Pence refused to pardon him.
More to the point, even if Pence had black friends – which, again, I'm pretty sure he doesn't – none of them would have warned him about the righteous, God-ordained dragging he was about to endure.
After all, Pence, along with the majority of the Republican establishment, stood silent while Donald Trump condemned Haiti, South America, and Africa as "sh*thole countries" while simultaneously wishing that more ethnicities like Norwegians would immigrate to the States.
So on Monday, as Pence sat there in the pews, beet-red (because hatred has a way of messing up your face) Dr. Maurice Watson of the Metropolitan Baptist Church in Prince George's County, Maryland, let him have it.

Citing the fact that he had African parishioners, Dr. Watson stated:

I stand today as your pastor to vehemently denounce and reject any such characterizations of the nations of Africa and of our brothers and sisters in Haiti.

Whoever made such a statement, whoever used such a visceral, disrespectful, dehumanizing adjective to characterize the nations of Africa, whoever said it, is wrong. And they ought to be held accountable.

The whole time Pence just sat there, red-faced and silent. I can only imagine what was going through his mind at the moment, but I hope part of that was reflecting on how wrong racism is and how, as a Christian, you need to foster the spirit of togetherness. (In case you forgot, among all the general viciousness and horrors happening at the White House, Pence is, indeed a Christian.)

Watson also reminded the congregation that "the main value that Dr. King stood for is the value of love," something we tend to forget about in these fraught times. The entire thing is simply delicious, and a must watch. So is Pence's MLK Day tweet, in all its irony.

In the end, Dr. Watson began his closing by saying, "My friends and members from Haiti, from Africa, you are owed an apology, but you probably won't get one. But even if you don't get one, I as your pastor, your Metropolitan family, will stand shoulder to shoulder, heart to heart, and breast to breast with you..." Powerful words indeed.