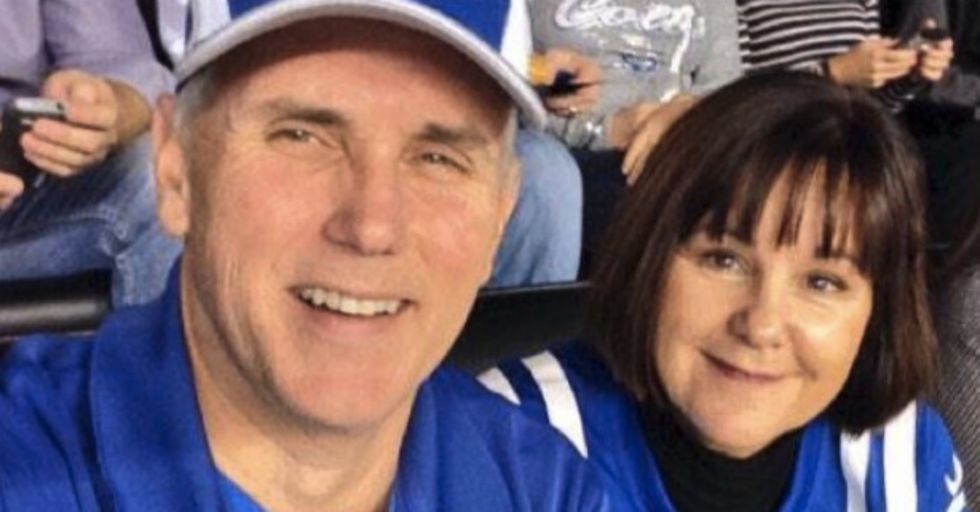 Mike Pence Walked out of an NFL Game This Weekend After the Players Protested — but Was It a Publicity Stunt?

You might have heard that Vice President Mike Pence went to the Indianapolis Colts vs San Francisco 49ers NFL game in Indianapolis this weekend. Pence began the evening looking jolly, even taking selfies with fellow football fans, but when players knelt in silent protest during the National Anthem, Pence suddenly walked out of the game, costing tax payers an estimated $242,000 for his flight to the game, alone, according to CNN. That, of course, doesn't include the price of transporting the Vice President to the actual game, boosting security, coordinating his entourage, etc.

Basically, Pence used taxpayer dime to fund what amounted to a very expensive publicity stunt, and people are seriously livid.

After all, how could Pence possibly know that he'd be offended at a football game where players could maybe possibly probably kneel. The thought hadn't crossed his mind at all...

But Pence's tweets seemed to suggest the contrary.

Some people even suggested that the whole thing was preplanned, and Pence's use of a carefully selected picture and what read like preplanned tweets seemed to support this theory.

Things heated up when it emerged that Pence's team had advised reporters to stay in the van since he "there may be an early departure from the game."

FLAG: Was Pence leaving Colts game a political stunt? Reporters were told to stay in van bc "there may be an early departure from the game."
— Peter Alexander (@Peter Alexander)1507487415.0

Pretty considerate of him to give the word not to waste people's time and energy. But maybe be more slick about planning publicity stunts when you, ya know, plan a publicity stunt? Just a thought.

Then Donald Trump swooped in and confirmed the whole thing.

Because the man literally cannot stay away from Twitter. Especially if there's an issue that he really shouldn't be focusing on as President of the United States. Remember, Nazis marched again last night? And there's an entire island full of Americans that still needs relief? But it didn't end there...

Some people were so amused by the whole thing, they began speculating what other situations Pence could walk out of.

Listen, Fenty beauty can't have EVERY shade known to man. Even Rihanna has her limits.

This one wondered what was the earliest instance of Pence walking out.

Although, it would be more like crawling out, right? You know, cause babies can't... oh, never mind.

There are multiple levels of cutting-edge shade happening with this one.

You almost have to use formal logic to break it down. If someone keeps going to something to remind themselves that they don't like it, doesn't that suggest, on some level, that they do like it?

Other people got creative - super creative.

There is an old fellow named Pence Whose hobby is taking offence. He does it some days In gimmicky ways As well as at public expense.
— Limericking (@Limericking)1507494238.0

We'll be repeating this one to ourselves over and over and over. This could even become like a children's rhyme. Our favorite bedtime story about that time our Vice President protested a protest.

But other people had a more pointed suggestion for Pence's protesting powers.

Because at the end of the day, that's what it's all about, right? Just a thought.