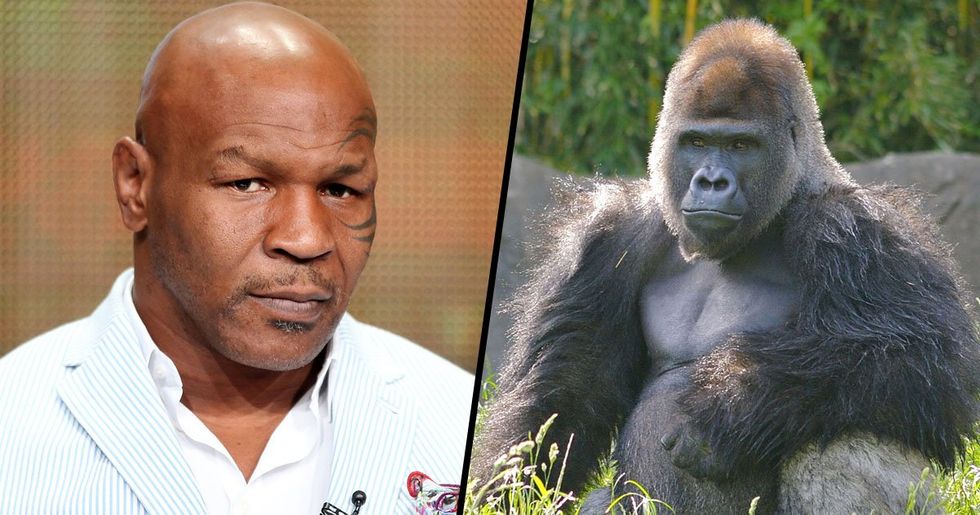 Celebrities are just people. Like you, or me, they are human beings who have just reached an elevated level of success. Often they are grounded and likeable people, something often exhibited on TV chat shows and panels, but in some cases the fame and fortune can go to a person’s head. Having so much money must be nice, because it allows you to do whatever you want. You can buy a yacht, a basketball court, an aquarium. The possibilities are endless, but that doesn’t mean that they don’t come with rules, regulations and morals. Something that boxing champion, Mike Tyson, didn’t take into account when he offered a zoo $10.000 for a very strange request.

We all know Mike Tyson.

Not only is he distinguished by the tattoo on his face, he is also recognised as a boxing legend.

One who has even broken records.

In 1986, Tyson became the youngest heavyweight champion, at the time he was only 20 years old.

He even has his own nickname.

Being a tour de force in the boxing ring has led the champion to also be known as ‘The Baddest Man on the Planet.’

A title he has fulfilled time and time again.

And there can be no question that Tyson is not the person you want to get into a fight with. Physical or verbal.

Seems like he’s willing to take on anyone… or anything.

Being dubbed ‘The Baddest Man on the Planet’, must go to your head a little. Especially when learning that Tyson once thought he was strong enough to take on a Silverback Gorilla.

Recently, the 52 year-old boxer, revealed that back in the 80’s he bribed a zookeeper into opening the park simply for himself and his wife, Robin Givens.

What a romantic idea.

Seems that the couple had always been fond of zoos, and wanted to take a romantic stroll among the various, exotic animals.

But after a brief stroll, Tyson got an idea.

After strolling around the zoo and admiring the various animals, the couple came across the gorilla enclosure.

In the enclosure, the alpha gorilla was apparently bullying the others into submission.

And Tyson wanted to teach him a lesson.

Immediately, Tyson offered the zoo worker $10.000 to go into the cage and punch the alpha male.

Not the best idea in the world.

As Tyson himself explained: "When we got to the gorilla cage there was one big silverback gorilla there just bullying all the other gorillas. I offered the attendant $10,000 to open the cage and let smash that silverback's snotbox! He declined."

Well, of course he did.

Yes, it may be no shock to learn that the worker had to decline Tyson’s offer. Seeing as punching a gorilla could be seen as animal abuse.

After hearing the story, you may have a firm opinion of the man who wanted to punch a gorilla. But, if you can believe it, Tyson has always been a public animal lover.

With his own menagerie of animals.

Tyson has been known to keep pigeons and other various animals.

But there is one animal he is especially known for keeping.

In fact, Tyson has been well-known for keeping a number of tigers as pets. Especially exotic white ones.

So why would he want to hurt a gorilla?

I guess having all that strength makes you feel untouchable.

And, come on, who’s going to fight Mike Tyson?

Outside of the ring, nobody wants to get in this guy’s bad books.

But it seems that he has mellowed recently.

Tyson may be known for his career and his pet tigers, but he is also known for revelling in the marijuana industry.

Which he is a keen supporter of.

Only last week, he was photographed smoking a foot-long joint.

He even owns a ranch.

Tyson also has other plans for the Class B drug.

On February 23rd, Tyson will also hold a weed-themed musical festival at his ranch, although he has made it clear that the drug won’t be sold at the event.

I guess this shows you…

When you have so much money, you sometimes don’t know what to do with it.

It makes you do dumb things.

Or keeping exotic animals as pets.

I mean, why buy a white tiger when you can just have a cat? One that won’t rip your arm off.

It can also make you think that you can wrestle a gorilla.

Which, by far, the weirdest thing Tyson has done in this article.

But I guess it does beg the question.

Personally I wouldn’t want to bet on such a match, either could win!

Gorillas are all about dominance as power, so maybe he was threatened by Tyson and his boxer body.

And who knows what else Tyson has in store?

Tyson seems like the kind of guy who is just brimming with crazy stories. Maybe we'll hear another one in the future soon.

Who knows what other animals he's felt like fighting.

Let's just say I'm waiting for the day when Tyson reveals his near combat with a blue whale - now that would be interesting!