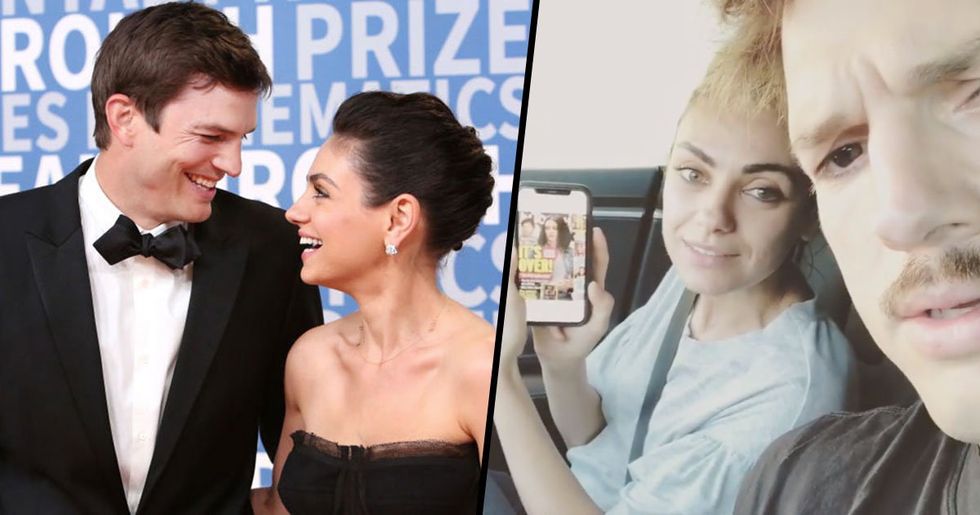 Let's be honest with ourselves; we absolutely live for celebrity romances. And we love a celeb marriage even more.

When two of our favorite stars tie the knot, it's a very valid excuse to stop everything that you are doing in your life and obsess over every aspect of their marriage. Or is that just me?

But with a celeb marriage comes the drama, whether it's just pure gossip or a legitimate divorce six months after the pair say "I do."

The most recent drama to unfold in the showbiz world is regarding possibly the most beautiful couple in the world, and they couldn't have handled it better.

Mila Kunis and Ashton Kutcher are probably the most beautiful couple in Hollywood.

Since Ashton and Mila tied the knot in July 2015, they have become Hollywood's most loved couple. Marriage goals or what?!

But how did the couple meet?

Ashton and Mila met in 1998 when they both starred on That 70's Show, in which Ashton played the leading role of pretty boy, Kelso, and Mila played his on-and-off girlfriend, Jackie.

Talk about a throwback...

Ashton was twenty-years-old, whilst Mila was only fifteen. But this wasn't where their romance blossomed, at all.

Despite Mila admitting to having a "huge crush" on Ashton...

The two went their separate ways for many years. Ashton married actress, Demi Moore, in 2005 and the marriage lasted 6 years. On the other hand, Mila had a long and rather rocky relationship with child-star, Macaulay Culkin, of Home Alone, which began in 2002 and lasted for 8 years.

But they formed a friendship that lasted for years.

When That 70's Show came to an end in 2006, Ashton and Mila had apparently forged an enduring friendship, despite the two of them having separate professional and love lives. Ashton appeared in movies such as What Happened In Vegas (2008), No Strings Attached (2011), and his recurring role in comedy series, Two And A Half Men (2011-2015). Mila focused on her acting career, too, starring in movies such as Black Swan (2010), Friends With Benefits (2011), and doing the voiceover of Meg in Family Guy (1999- present).

The pair both found themselves single a few years later...

Ashton's marriage to Demi Moore came to an end in 2011, whilst Mila was single from her break-up with Macaulay in the previous year. Good timing? I think so...

The world began suspecting the couple's involvement with one another, and when asked about it, Mila simply said that the dating rumors were "absurd" and that they were just good friends. Okay then...

It finally emerged in 2013 that Ashton and Mila were indeed in a relationship.

Speaking to Elle Magazine, Ashton stressed the importance of keeping relationships private, saying: "I am going to do everything in my power to have this relationship be private."

The couple even admitted to starting out as a "casual thing"...

Mila admitted to her and Ashton beginning their relationship as a "friends with benefits" kind of thing until their romance eventually blossomed into what it is today.

They welcomed their first child in 2014.

Ashton and Mila welcomed their daughter, Wyatt Isabelle, in September 2014, and their son, Dimitri, followed in 2016. Between the births of their two children, Ashton and Mila finally tied the knot in July of 2015.

Their marriage and family life has always been kept private...

Ashton and Mila have been known to keep their personal lives extremely private. They haven't subjected their children to social media or the limelight, and have only made a rare couple of appearances with Wyatt and Dimitri. They are raising their children in a normal, down to earth way, and despite their collective net worth of $170 million, the couple want their children to not be spoiled and, as Mila once said, she doesn't want to raise "a**holes."

Nobody wants to raise a spoiled a**hole, right?

The pair are pretty rock-solid by the looks of things.

It appears that Ashton and Mila are stronger than ever.

All the more reason for tabloids to start inventing some stories...

Tabloids have a fierce reputation for being complete sh*t stirrers, to put it lightly. It's extremely rare that something that a tabloid reports on is as true as they make it out to be.

This involves US tabloid, In Touch Weekly.

The article claimed that Ashton and Mila have "called it quits on their relationship," because Mila felt "suffocated."

How did the couple respond to this?

Ashton filmed himself and Mila in the car...

Mila showed the front cover of the article on her cell, in which the headline "ITS OVER" can be seen very clearly, to the camera. Ashton goes on to ask his wife, "Babe, what's happening? What's going on?"

The sarcasm is just brilliant...

The pair continue to discuss the article in a mock-confusion, with Mila responding: "It's over between us," whilst shrugging and referencing back to the headline.

They are clearly very torn up over the situation...

Ashton continued the drama by asking his wife: "It's over between us? Oh my god, what are we going to do?" Mila proceeded to list the reasons that the tabloid suggested led to their "break up," which included Mila feeling "suffocated" and Ashton having a "very dark secret."

"Oh my gosh, what was the dark secret?" Ashton gushed, teasing: "It must have been really dark!"

I guess it really is over...

Ashton captioned the video: "I guess it's over @intouchweekly have fun selling magazines this week. Maybe next week my wife will be having twins. For the third time. But who's counting."

In Touch Weekly have a lot to explain...

It's unknown as to where the tabloid obtained this information, but it has clearly been strung out of thin air.

The internet shared its communal love for the power couple...

And it's safe to say that the world is breathing one huge sigh of relief that Ashton and Mila are still happily married.

Ashton and Mila clearly don't let the heat of Hollywood get to them...

This beautiful couple is here to stay, and they've set a great example of how keeping a relationship private can work wonders for a family.