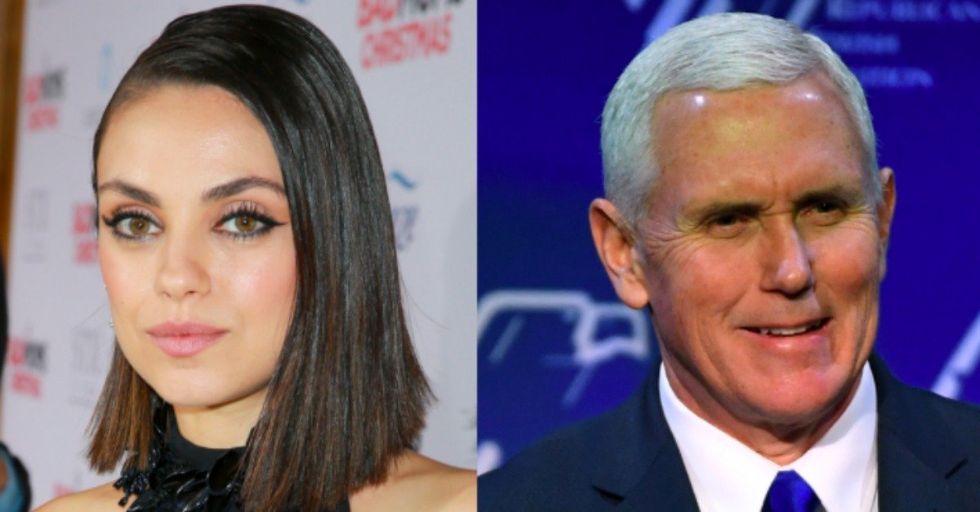 Vice President Mike Pence has proven himself to be very troll-able. The guy second in line for the presidency has a long history of far-right extremist views — he argued against marriage equality and stated that being gay was a choice; he denied that smoking could kill you all the way up until the year 2000; he fought to divert HIV/AIDS research funds into "conversion therapy" programs; and he calls his wife "mother."

Meanwhile, Mila Kunis has proven herself to be quite delightful. She's a joy to watch on screen, and as it turns out... she has been trolling Mike Pence for months.

She revealed her perfectly diabolical ongoing prank when she appeared on Conan earlier this week.

In case you forgot, Mike Pence is kind of actually really evil.

In addition to every other bad thing he's done, anti-abortion Mike Pence authored a bill to defund Planned Parenthood, which would stop all federal funding to the organization, even though Planned Parenthood didn't use any of its federal money for abortions.

So, Mila Kunis decided to troll Pence with repeated donations to Planned Parenthood set up in Pence's name.

"I disagreed with some of the stuff that Pence was doing and was trying to do, and so as a reminder that there are women out there in the world that may or may not agree with his platform, I put him on a list of reoccurring donations that are made in his name to Planned Parenthood." *pause for uproarious applause* "Every month, to his office, he gets a little letter that says, 'An anonymous donation has been made in your name.'"

This is just about the greatest thing we've ever heard.

As Kunis says, it's not so much of a prank as it is a "peaceful protest" against his harmful, misogynistic beliefs and practices. You go, girl!