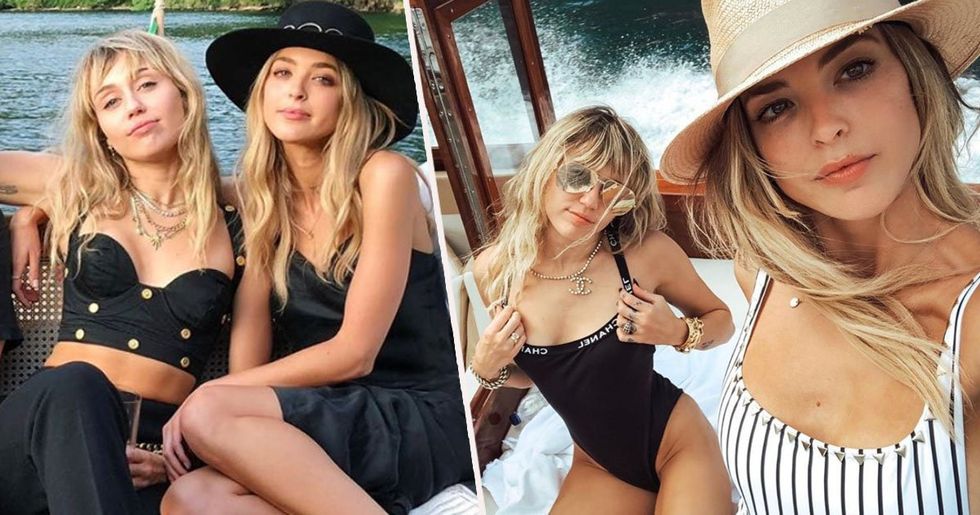 After just 8 months of marriage, long-time couple Liam Hemsworth and Miley Cyrus have split. The news was confirmed by Miley's rep, speaking to the publication, People.

Rumors of a split between Cyrus and Hemsworth started on Saturday after fans noticed something strange in her Instagram posts. Keep scrolling to see the Instagram post and the reason for the couple's split.

Since the split, Miley has been on what could be termed a "mad one." But the thing that's shocked the world the most are those images of her poolside makeout with Kaitlynn Carter. And now Carter has responded to the controversial snaps.

She was Hannah Montana.

It wasn't The Last Song for this couple.

They were living their best life.

They were living together, holidaying together, and just generally looked so happy, but so normal. Plus, they are both vegans and regularly share pictures together of themselves with all their pets.

They were engaged, but no date seemed to have been set.

Although their engagement had been going on for years, to the outside world it seemed like Miley and Liam were just happy being regular twenty-somethings dating.

After months, years even, of thinking that maybe they were just another celebrity couple who would never tie the knot, two pictures were posted. It wasn't easy to see what was going on, especially as there were no pictures.

This was all we saw for a few days.

It sure looked like a wedding picture, but with no caption there was certainly room for doubt. Especially as it was around Christmas time. It's the one time of year when people could be wearing anything, for any occasion, and it could just be for Christmas.

And then we got to see the photos.

Out of nowhere, to celebrate Valentine's day, Miley started posting some photos from their wedding. In true Miley style, she posts a real picture of them just being them.

This is why we loved them.

Miley marches to her own tune and does things for herself, rather than other people. It seems like she and Liam have that in common.

This is one of the few pictures that have been posted of Miley in her wedding dress. Her Vivienne Westwood dress is simple, but elegant. Much like their wedding, which was for close family only.

Even on her wedding day, she is still rocking at being herself.

Most people have a billion wedding photos, and all of them are staged. Often near some trees, or a sunset, or some other improbable setting. But Miley just posted a photo of herself rocking it on the dancefloor.

But with a beautiful man on her arm who will support her.

This picture is beyond sweet, particularly as it resonates for so many of us. With Miley at 1.65m and Liam standing tall at 1.91m, there is nearly a foot difference in their height, but they're happy to meet in the middle.

Sadly, after just 8 months of marriage, the couple has split.

Miley captioned the picture "Mute me if you don’t want SPAMMED" In response to the image, her sister, Brandi, commented, “Boooooooooooooom!" It looks like we're about to see a lot more of Miley.

Post-breakup, Miley posted this fire snap on her Insta.

And her caption seemed like a none-too-subtle reference to her ex-hubby. "Don’t fight evolution, because you will never win. Like the mountain I am standing on top of , which was once under water , connected with Africa , change is inevitable," she wrote.

And, in the grand tradition of celebrity breakups, Miley then took a trip.

Alongside The Hills star Kaitlynn Carter, Miley took her single self on vacation to Lake Como. But it was what she did while she was there that got everyone talking.

Because Kaitlynn and Miley were pictured in a pretty compromising position.

Do they look like two single pals mourning the breakdown of their marriages? Judge for yourself.

The internet was kinda loving it.

In a story which looked like it might have a sad ending, what an excellent twist a girly poolside makeout session is. Thanks, ladies!

Although things then got a little messy.

Kaitlynn's ex, Brody Jenner, posted a comment about how he and Liam were planning a same-sex public display of affection to rival their ex-wives' - and Miley clapped back.

And it seems Kaitlynn isn't taking it lying down, either.

She has responded in an amazingly passive aggressive manner, simply posting an Instagram story of herself singing "Don't Worry, Be Happy." Take that, Brody.

That's not all she posted.

Kaitlynn also shared this group snap of her alongside Miley - and the pair are both sporting noticeably wide smiles.

People are going mad for this story.

The fact that Miley Cyrus and Kaitlynn Carter may or may not have left their husbands for each other is the plot tw… https://t.co/Um0OPrKcY2
— Mackenzie Newcomb (@Mackenzie Newcomb)1565489687.0

We just can't wait to see what these two wild, husbandless ladies do next. If it's attention they're courting, they're doing an excellent job of it.

Although some have had a different reaction.

Hey, if these two don't want Lim Hemsworth or Brody Jenner, then there are plenty on Twitter who do.

Love her or hate her, you've got to admire Cyrus.

Rather than dwelling on her failed relationship, it seems she's just keeping on moving with a positive attitude. Respect!