In April of 2013, Cyrus' father Billy Ray goes on Nightline and discusses the couple's future. | 22 Words 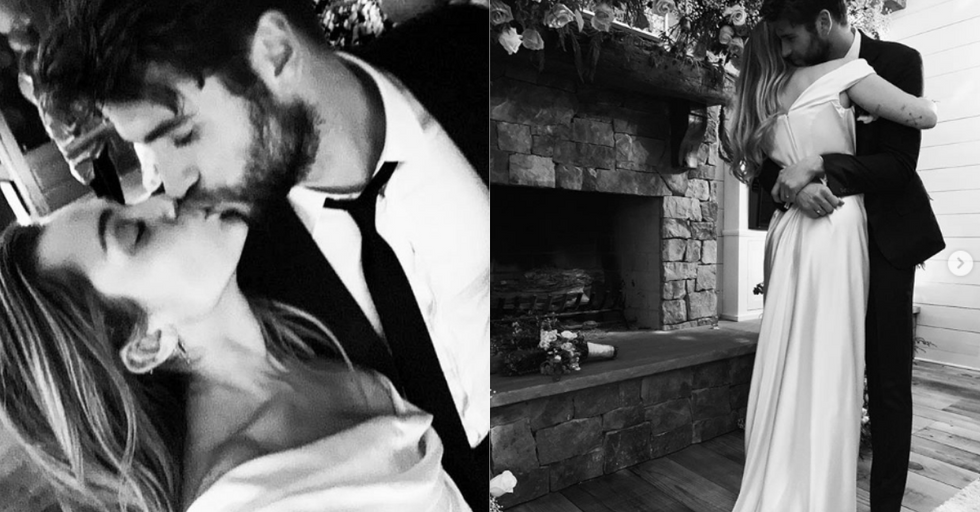 Longtime loves, Miley Cyrus and Liam Hemsworth finally tied the knot this week.  And fans of the couple know this wedding has been a long time coming. The couple first met on the set of The Last Song, a romantic drama based on a Nicholas Sparks novel of the same name. This was all the way back in June of 2009, and the pair continued to date until 2010 when they briefly broke up.

In 2011, they rekindled their romance and began again. Miley walked the red carpet at The Hunger Games premiere with Liam and wore a big sparkly ring on her engagement finger.

Despite claiming it wasn't an engagement ring, Cyrus finally broke down and let the public know they were indeed engaged in June of 2012.

She told People Magazine, "I'm so happy to be engaged and look forward to a life of happiness with Liam."

In January of 2013, Cyrus and Hemsworth are caught by paparazzi hanging out on the beach in Costa Rica.

They look happy and glowing.

In March of 2013, fans go wild when they spot her wearing her engagement ring in this selfie.

All is still well in Miley World, but a storm is brewing...

They postpone the wedding. An anonymous source told People, "They want to figure out their life together before they get married." This was clearly showing there were bigger cracks in the foundation because, in 2013, they called off the engagement entirely.

In April of 2013, Cyrus' father Billy Ray goes on Nightline and discusses the couple's future.

He told Nightline "They're young, they're kids. The great news is they're great friends. And if you end up getting married, that's your business too, you know?" Fair enough, Papa Cyrus.

Drama ensues. Cyrus twerks and dances with her tongue out. Hemsworth adopts a dog. Cyrus dates Patrick Schwartzenegger. It's a lot, honestly.

In January of 2016, Miley suddenly appears in some Instagram pictures with the Hemsworth family in Australia.

Could this be the rekindling we've all been hoping for?

In July 2016, Cyrus gets an adorable tattoo of Vegemite on her arm — a traditional Australian spread that Hemsworth reportedly loves.

Finally, in October of 2016, Cyrus confirms the engagement is BACK ON. OMG. In May 2017, Cyrus releases "Malibu" a beautiful country-inspired song about her relationship with Hemsworth. Awww. And since then, we've just been waiting in excruciating agony for these two to tie the knot already.

And now our prayers have been answered.

These crazy kids finally did the damn thing. Cyrus posted 3 gorgeous black and white photos to her Instagram to announce the couple's wedding ceremony. E! reports, "For the ceremony, the "Wrecking Ball" singer wore a gorgeous off the shoulder Vivienne Westwood gown, with her blonde locks cascading down her back. As for Liam, he appeared to be wearing white Vans and a suit and tie for his formal attire."

We wish these lovebirds all the best!

Here's to a lifetime of wedded bliss!