Miley Cyrus Cut Her Hair Into a Mullet | 22 Words 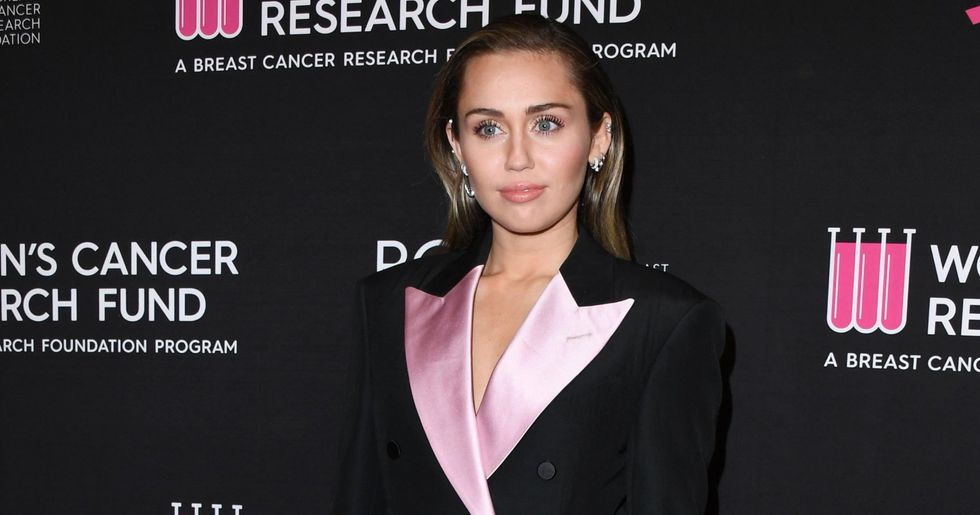 Miley Cyrus Cut Her Hair Into a Mullet

It's no secret that Miley Cyrus' love life has been pretty turbulent recently. Since her shocking split with her husband, Liam Hemsworth, the star's relationships have been hitting the headlines more than ever.

In the wake of her speculated split from new beau, Cody Simpson, (you can read all about that at the end) Miley has done what many of us do in the midst of relationship drama... change our hair.

But the star hasn't just got for a slight chop or tame color change up... she's opted for a mullet. Yes, you read that right. A mullet.

Keep scrolling to take a look for yourself.

It all began on Disney Channel.

Circa 2006, an eleven-year-old Miley Cyrus auditioned for the role of Hannah Montana's best friend, Lily. Cyrus nearly never got the part due to her being a bit too small and young to fill the role... However, after considering her impressive singing ability as well as her undeniable acting skills, casting agents decided to make her the star.

Miley starred alongside her dad.

Hannah Montana became a family project when Miley's dad, famous country singer Billy Ray Cyrus agreed to feature. The characters were then written to match the lives and personalities of Miley and Billy Ray, they even shared the same names.

Or at least that's what Disney wanted us to believe. For young Miley the split personality of Miley the character, Hannah Montanna the alter-ego and Miley the person must have felt a little confusing at times. At only twelve-years-old Cyrus was launched into stardom.

In 2006, after the hit-show was launched Disney decided to release a soundtrack album. The Hannah Montana soundtrack topped the Billboard charts and sold three million copies worldwide. Cyrus became the first Disney act to have deals within television, movies, consumer products, and music.

The Best Of Both Worlds World Tour.

By 2007, Miley Cyrus was not only continuing to make the hit tv-show she was also performing the Hannah Montana world tour.

Like all the Disney Channel kids rumors constantly swirled about who was "dating" who. Cyrus was rumored to be dating fellow Disney star, Nick Jonas from June 2006 to December 2007.

In her debut feature film gig voicing a character in Disney's Bolt (2008) Cyrus was nominated for a Grammy. Remember when no one knew Travolta wore a wig? Huh, weird right.

Hannah Montanna got her own movie in 2009, and marked Miley's emergence onto the big screen.

In 2010, with Hannah Montanna well and truly over, seventeen-year-old Miley starred in a movie alongside Australian heartthrob Liam Hemsworth. The co-stars fell madly in love.

The Hemsworth-Cyrus love saga lasted over a decade.

The pair officially began dating in 2010 but split in late 2012. 4 years later, things were back on, and the pair rekindled their romance.

In a classic post-break move, Miley decided to switch up her look. Going for a short back and sides and peroxide blonde style, Cyrus entered a new era.

In a groundbreaking video shot by Terry Richardson, Miley shook the world with her "Wrecking Ball" song. To date, the 2013 music video has garnered one billion views.

Miley's music repertoire has gone from strength to strength and her loud and proud fashion statements have cemented her as one of pop music's key players.

As of 2016, Miley joined the ranks of the coaching panel on the eleventh season of The Voice U.S, replacing Gwen Stefani. Cyrus became the youngest coach ever to be selected for the show.

Miley and Liam rekindled their romance in mid-2016 after 3 years apart. In December 2018 they wed in a private ceremony in Tennesse. Things didn't last though and Liam filed for divorce in August 2019.

And it seems, in the midst of all her relationship drama...

Miley has opted to do the classic "change up your hair after a break up" kinda thing.

And fans have been freaking out over her new 'do.

Like Leilani, who found the whole thing to be way too much...

We kind of understand this reaction...

And some wanted the star to push the look even further...

We think the internet might implode if Miley died her mullet black...

Some had this reaction...

We don't need a generation full of mullet-wearers...

So the general consensus is that Miley's new haircut is quite a bold choice...

She hasn't just got for a slight chop or color change up - she's gone for a full-blown mullet vibe.

Miley shared the snap of her new hairdo on her Instagram stories. Her platinum blonde locks were styled with shorter bangs along with feathered layers.

But there's been another overwhelming reaction.

Since the singer debuted her dramatic new look, fans have been quick to express their displeasure and the heat hasn't all  been on Miley.

Fans have been slamming Miley's hairdresser...

"This is the worst haircut I’ve ever laid my eyes on u call urself a hairstylist. now this is gonna be all over TMZ and the news plus the locals that don’t like Miley are gonna think she’s going through a meltdown again why can’t we ever win gonna go cry now bye! That was all," one wrote displeased Instagram user.

But her hairdresser fired back...

"First of all if you knew anything about hair it’s the position she’s in that’s why it looks that way, it’s 100% even and she also had it straightened so it’s more severe which I actually like," she wrote. Ah well, you're unlikely to please everyone anyway. Want the latest juicy details on Miley's complicated love life? Including her reported split from Cody Simpson? Keep scrolling.