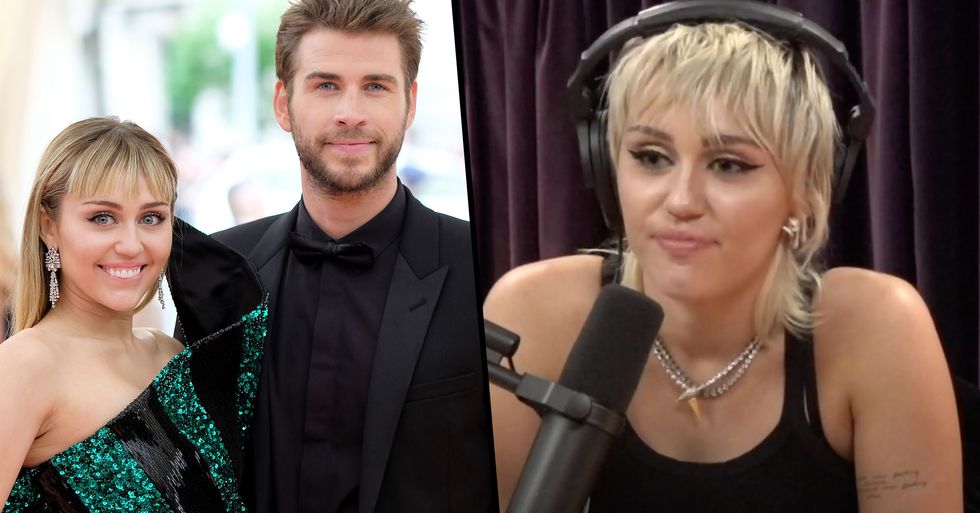 Miley Cyrus Has a 'Non-Negotiable' Relationship Rule After Her Divorce

In her most recent interview, Miley Cyrus revealed her non-negotiable rule for dating that she brought in after her divorce.

Keep on reading to find out what it is...

The girl who grew up in front of the camera.

She shared a lot with the public.

From her teen years to her mishaps.

Shes even shared her relationships.

And now, her 'non-negotiable' relationship rule...

Now, Miley first made an appearance on our screens as Hannah Montana on the popular Disney show.

Miley also starred in the film version of the show...

But she recently retracted her apology for the controversial Vanity shoot...

Miley released 2 albums while starring in Hannah Montana - producing several singles, including the popular 2009 hits "Party in the U.S.A.," and "The Climb".

They were on and off for years...

And one of their longest break-up periods in 2013 brought on Miley's infamous Bangerz era. Who could forget?!

It was definitely clear from this era that Miley's Disney days were behind her...

Bangerz showed us a completely different side to the then twenty-one-year-old. As well as for her new hair cut and controversial music videos around this time, the star attracted headlines for her rebellious antics, too.

From smoking marijuana to getting tatted up, Miley was hot tabloid news...

There's no denying that she had gone off the rails...

And fans started to get seriously worried for the star following her around-the-clock antics.

In 2018, the unpredictable singer finally got back together with Liam...

But in typical Miley Cyrus fashion, it wasn't meant to be.

We all know how that ended.

Miley wasn't afraid of showing off her new, and very hot, romance...

And even though it was a clear dig at her now ex-husband, fans were living for it.

Miley claimed that she was "happier than ever" with Cody...

And even though it has been reported that the pair have called it quits after almost 2 years of dating, it seems that Miley is finally finding peace within herself.

The singer recently opened up about how she is currently 6 months sober.

Speaking with Variety, she explained that her new-found sobriety has come following some vocal surgery she had earlier in the year.

The star appeared on the Joe Rogan Experience podcast earlier this week...

Where she discussed all things from her recent surgery, her upcoming ventures and the time her dad dropped her on her as a baby.

She was just 2-years-old when the accident happened.

"It's bad," Miley began after Joe asked her to detail the incident. "My dad had me - this is really bad, but he can't go to jail, I don't think, because it's a long enough time away - He had me in a baby backpack and I was on a dirt bike with my dad. And he was riding and a tree had fallen and he ducked. I didn't and I hit my head on the tree."

Miley then went on to say that the incident explains "a lot."

"It was bad," she added. "So that's what's wrong. Everyone’s asked me that for years. Maybe it knocked me into this identity or something. When I get really overwhelmed I also have a tendency when I know something's really stupid, I just gotta try it, to know that it's stupid. Which makes it stupid because I already knew about it."

"I've given him an award for worst dad ever." Ouch.

That wasn't the only thing that Miley disclosed during the interview.

As she also revealed her relationship rule that she started, following her divorce from Liam Hemsworth.

The end of a marriage isn't easy for anyone, never mind in the public eye. and Miley touched on the difficulty of dealing with this.

She started by saying "I recently just went through a very public divorce that fucking sucked. What really sucked about it wasn't the fact that me and someone that I loved realized that we don't love each other the way that we used to anymore. That’s okay. I can accept that. I can't accept the villainizing and all those stories that like—it's just amazing to me that the public kind of thinks that there's no gap of time that they didn't see that could possibly be what led to this.

Despite not mentioning Hemsworth's name, she also spoke about how she felt following the divorce:

"Actually I called the love of mine who I was with when we got divorced, it was almost like a pacifier. It was that thing I just needed not because we were in love anymore but because the comfort and because my brain said, 'oh, this feels better. This is comforting.' But actually, knowing that I was giving in to an addiction made me feel way worse. I had the hangover. Next day, okay, we sleep together, next day, I’m totally hungover. It felt like a relapse every time I’d go back."

No doubt, it's been a turbulent couple of years for her but it seems above all it did teach her one thing.

As she now as a non-negotiable rule for all relationships.

They have to know what they want.

She told Joe "And I think now a non-negotiable in my relationship or dating, you better know what you want because I’m just not interested in taking another 10 years like did with my first love figuring that out."

It's the first time the star has been single since 2015 so now really will be the time to put the rule into practice.

You can watch the full interview here: And for more on Miley, keep on reading to see how different Liam Hemsworth is one year after their final break-up...