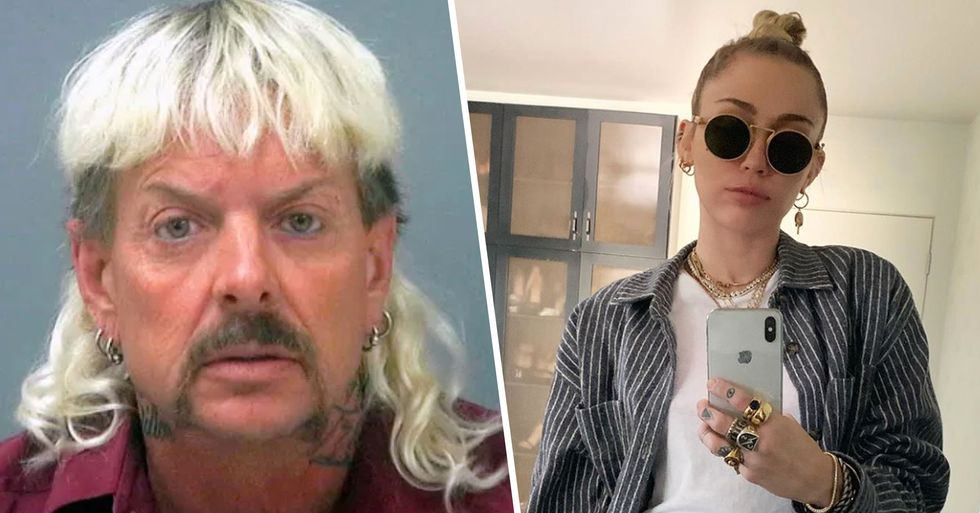 It's no secret that Miley Cyrus' love life has been pretty turbulent recently. Since her shocking split with her husband, Liam Hemsworth, the star's relationships have been hitting the headlines more than ever.

In the wake of her the current pandemic, the star has reacted in the same way many of us have - with a brand new hairstyle. But the star hasn't just got for a slight chop or tame color change up... she's opted for Joe Exotic style quarantine bangs.

Keep scrolling to take a look for yourself.

Not quite the romantic gossip we wanted, but it's adorable nonetheless. An E!News insider revealed the information after seeing the pair for a "brief moment."

Miley admitted that Cody is actually her boyfriend.

Since then, Cody and Miley have been going strong.

But their latest move has the whole world falling in love with the pair.

The world is a pretty strange place right now.

So Cody and Miley have decided to do their bit to help.

The two have been offering a good deed to healthcare workers at their local hospital.

And the way they're showing their affection? With tacos, of course!

"During a pandemic, we have to show love and support to all the healthcare workers doing their amazing job."

"So, we are doing a big taco delivery to a local hospital."

"Tacos for the incredible healthcare workers at our local hospital!"

"So grateful for these true legends of our time dedicating their lives to battling this pandemic."

"Show some love to yours in your community!"

What a brilliant idea.

But Miley has also been changing up her style during quarantine.

Miley's latest look took the mullet to the next level.

This is a mullet inspired by the king of mullets, Tiger King star Joe Exotic.

And this time she can't even blame her hairdresser.

Because these are some self-trimmed quarantine bangs.

Hey - at least it's a relatable problem!

Let this be a warning to anyone thinking about trimming their bangs at home.

It's just not worth it, guys! And this isn't Miley's first foray into the controversial haircut ...