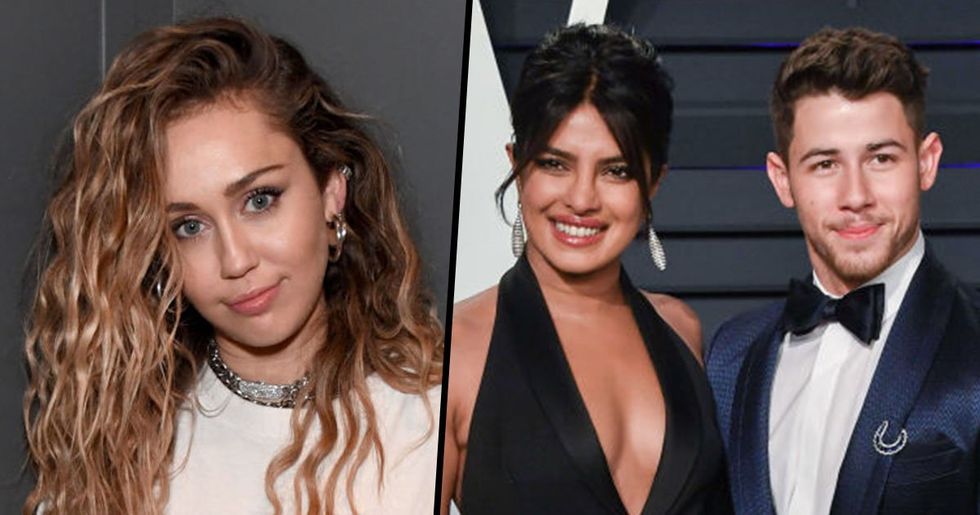 It’s always interesting to get a glimpse into the mindset of Hollywood stars, and satisfying when they’re made to seem human. We’ve all had awkward conversations with our ex, and felt the need to respond when a partner fraternises online with their ex. Well, it turns out child stars Miley Cyrus and Nick Jonas are not so different from us after all. Recently, in an Instagram conversation, Nick Jonas commented on a photo of Miley Cyrus from back in the day, donning a Jonas Brothers T-shirt, Nick’s current wife Priyanka Chopra then responded online.

Right, a little thing went down online the other day - here are the parties involved and a little about each of them. Two of them are reared child stars, and have led pretty odd lives.

Cyrus started off as a teen idol on the Disney channel

She played Hannah Montana - average schoolgirl by day, famous pop star by night. There she is in the middle next to Hades, lord of the underworld.

From then on, the big bucks started rolling in.

Once Miley’s face began appearing on every girl’s lunchbox in America, things only got bigger.

Her aptly named debut album ‘Meet Miley Cyrus’ quickly rose to number one in the charts after its release.

Just the year after she released another number one album ‘Breakout’. I wonder how she manages to churn these out so quickly.

In 2009 Cyrus realised she couldn’t perpetually go on playing a teenager, or she’d end up like the man-children in Dawson’s Creek.

And that’s when she went all weird

It’s possible Miley tried a little too hard to catalyse an image as an independent, adult woman, and ended up doing all sorts of strange things like…

The time she scented Robin Thicke

After releasing his compassionate homage to sexual hypersensitivity and gender equality, ‘Blurred Lines’ - a song that affectionately espouses postfeminist mantras ‘I know you want it…’ and ‘just let me liberate you' - Miley and Robin took to stage for a duet. At which point Miley began promiscuously twerking her bare bottom against Robin’s striped bulge.

And there was the whole wrecking ball scene

Whether you like this track or not - you have to admit it’s an odd proposal.

Didn’t know Hathaway had that in her locker.

Nick Jonas! Cyrus’ other. The purity Disney rocker turned awkward post-pubescent. Here he is showing off one of the puppies whose charred bodies power the Christmas lights at Disney Land Florida.

Nick is one of the three brothers

They rose to prominence, like Miley, with that sweet, sweet Disney endorsement.

They starred in the Disney Channel’s hit show Jonas as well as the films Camp Rock and Camp Rock 2.

They even made a film all about themselves.

They had this whole 'purity ring' thing

The Jonas brothers promoted chastity rings for a while when they were young, which quickly binned once they reached adulthood.

Nick Jonas is now married to…

And are reportedly very happy. Probably because their combined net worth is in the tens of millions.

Here she is performing the Bollywood song 'Gun Gun Guna Re'

It’s quite a video.

Now, we’ve established the triangle, lets get down to what happened online.

Cyrus posted a DM between her and Nick Jonas in response to an old picture of her wearing a Jonas brothers T-shirt.

These throwback shots have been fire.

Not too sure what that means to be honest.

Here’s what she wrote

Is that passive aggressive? I can’t tell.

Then Gomez got involved

Selena Gomez pulled into the conversation, commenting "tbt - such babies."

''I've heard that rumor, I've never directly heard that from Miley but she does wear a dog tag that I gave her when I was 14 or something," - ah a dog tag, that’s so romantic.

Is that enough to make Priyanka territorial.

Now, to play us out

Here’s clip from South Park where the Jonas Brothers get beaten up by Mickey Mouse.