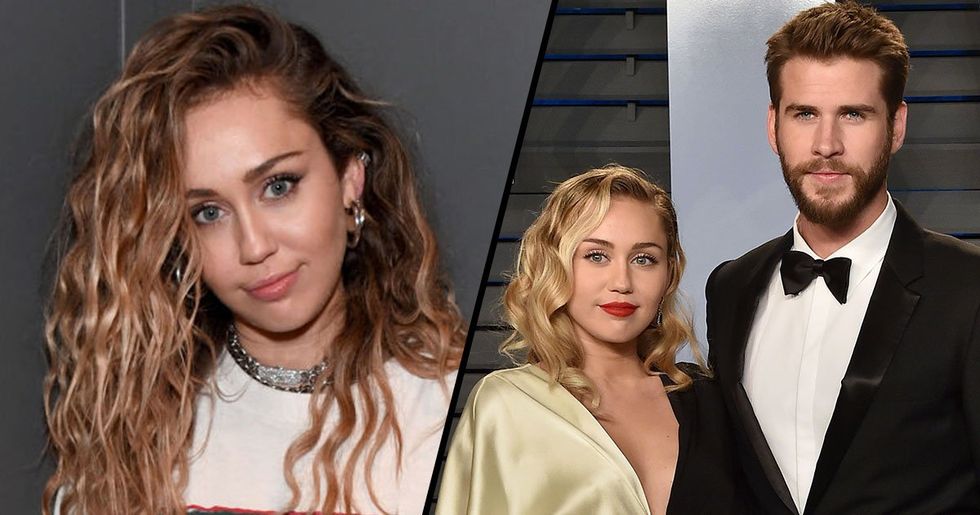 Rumors about Miley's pregnancy have been going around ever since she got back together with Liam Hemsworth in 2017 with Miley previously denying them all.

When the two got engaged, the rumor mill started up again, and was picked up by a lot of people.

They got married in secret just before Christmas and that sparked even more rumors: Miley might be pregnant for sure this time.

OK! Australia even managed to get hold of a photo in which Miley is wearing a loose shirt over what appears to be a baby bump.

We know that the couple got married only a month ago and Miley's stomach was as flat as an ironing board in her wedding photos. But who knows. Photoshop is hella powerful these days.

And, I mean, no one can really have such flat abs. Can they?

Miley and Liam's relationship began a decade ago, in 2009.

They played the two main characters in the film adaptation of Nicholas Spark's novel The Last Song.

Miley once told Glamour magazine she would love to get married and have children before 2019, Daily Mail says.

"Hopefully I'll be settled: making movies, living in a house, maybe even married," she said in 2009.

"I think my mom [Tish Cyrus] did everything pretty close to perfect, and I want to be the cool mum that the kids run home to."

According to Cosmopolitan, the first rumors of Miley and Liam's engagement broke out in 2012, after Miley was spotted with what seemed like an engagement ring during the premiere of The Hunger Games.

Miley told People at the time, "I'm so happy to be engaged and look forward to a life of happiness with Liam."

Unfortunately, troubles occurred in 2013, when people noticed that Miley had unfollowed Liam on Twitter.

Three days later and the rumors were confirmed. The two had split up.

The break-up was rough.

A few weeks later Liam was spotted making out with actress and singer Eiza Gonzalez. Miley broke down on stage while performing "Wrecking Ball."

But in 2016 Miley started to reappear in Liam's photos and even seemed to be wearing her engagement ring again.

Soon after, People magazine confirmed the two were back together and engaged again.

In 2017, Miley finally revealed why the breakup happened and why it's good that it did.

Her reports that Miley has told Howard Stern on SiriusXM, "I had to. I don’t like when relationships are two halves trying to make a whole."

"That's when someone's like, it's that, 'I can't eat, I can't sleep'. Well, that's because you're so used to depending on someone else."

"So, I don’t think that I have that co-dependency. I'm super stoked to have a normal [relationship]."

"I think people that break up and get back together, that’s awesome."

"You get time to be yourself. You get time to grow up. I think if you’re growing up attached to another person, you never really get solid as your own being."

She posted a photo of herself in a long and loose grey shirt with what looked like a baby bump. And she added the hashtag  #VeganTurkeyBaby.

Her fans went crazy with their "conspiracy theories."

But Miley denied them all, writing on Instagram, "Not pregnant just eating a shit ton of tofurkey. Rude!!!!"

Now, fast forward one year, Miley and Liam got married in secret on December 23, 2018.

Why? People magazine believes it's because of the California wildfires. This past November, Miley and Liam lost their Malibu home. The painful experience brought them even closer and they realized they wanted to spend the rest of their lives together, Cosmopolitan says.

Their source added, "They were both devastated after the fire. The way Liam took charge and helped her deal with that tragedy just adds another layer of love and security."

"They don’t have doubts about their relationship. They both wanted to get married. They have both matured a lot, and it seemed like the perfect time for them to get married."

So now the pregnancy rumors are back on.

Elle says they were sparked by OK! Australia who believed Miley was pregnant with a baby girl and was planning to raise her in Australia. That's the first red flag, in my opinion, - Miley loves her family too much to move across the globe.

OK! Australia claimed they had got the news from an unnamed source close to Miley and Liam.

"Miley's over the moon because she's carrying Liam's baby... It's a girl, which is what [they] hoped for," the source claimed, supposedly. "They never saw any urgency until they learnt their big exciting news."

After all, Miley and Liam have both admitted in the past that they would love to have a family one day.

"Family is so important to me," Miley said after she decided to cut down on the parties and weed when she got back together with Liam.

"They wanted to be young parents," the secret source continued.

OK! Australia says they decided to go ahead and become parents after the Malibu fire.

"Miley joked on The Howard Stern Show that she was very grateful to her beau" for rescuing every single one of their animals in the house.

"He got a lot of action for saving the animals," Miley said, as reported by the magazine.

According to them, this is how Miley told Liam the big news.

"They were on the phone [shortly after they lost their house] with Liam in California and Miley in Tennessee," the anonymous source said. Wasn't Miley in South Africa, shooting Black Mirror, at the time of the fire?

"Liam said, 'I wish I had some good news.' And Miley said, 'I have news that will put all of this in perspective.'"

"Miley then revealed she was carrying a girl to a tearful Liam."

"He called his brothers and parents," the source continued.

"She got him to Skype call her family, too. Her mum was crying." They even said they were going to name the girl Cassidy.

Most people didn't really believe the rumor. You've got to admit, it does sound like a scene from a movie rather than real life.

Miley took it upon herself to calm down her excited fans, calling the rumor "Bull shit" on Instagram.

She also made a direct comment to Daily Mail on Twitter, turning it into the Insta-famous egg joke, Elle says.

"I’m not 'Egg-xpecting' but it’s 'Egg-celent' to hear everyone is so 'Happy For Us' .... we’re happy for us too! 'Egg-cited' for this next chapter in our lives.... Now, can everyone leave me alone and go back to staring at an egg," Miley wrote.

Her New Year's Eve photos, in which she seemed to be drinking champagne, prove it to be true.

Elle also reports that fans have noticed no baby bump in other photos of her that were taken at the same time as the OK! Australia's one.

Plus, Miley and Liam have repeatedly said they have no plans for babies just yet.

"They both love kids, but they’re not in a rush to start a family," a source said.

Miley has also reacted to the rumor with a black and white mirror selfie that she posted on Twitter and Instagram.

The photo said, "Broken phone to match our system/society."

Elle noted, "Perhaps it was just a mood, perhaps it was her alluding to the same point Margot Robbie made earlier this week: it's pretty frustrating how culturally, many people immediately start expecting women to have babies after they get married."

Either way, I think Miley is just too busy to think about starting a family.

Mirror reports, she was on stage just last night, performing "an emotional tribute to the late Chris Cornell."

"The Audioslave and Soundgarden frontman passed away in May 2017 at the age of 52."

"On [Wednesday] night, the stars were out in force with the likes of Miley, Metallica and the Foo Fighters entertaining fans at the Forum for the I Am The Highway: A Tribute to Chris Cornell memorial concert." So Miley is NOT pregnant. Unless that's what she wants us to think...