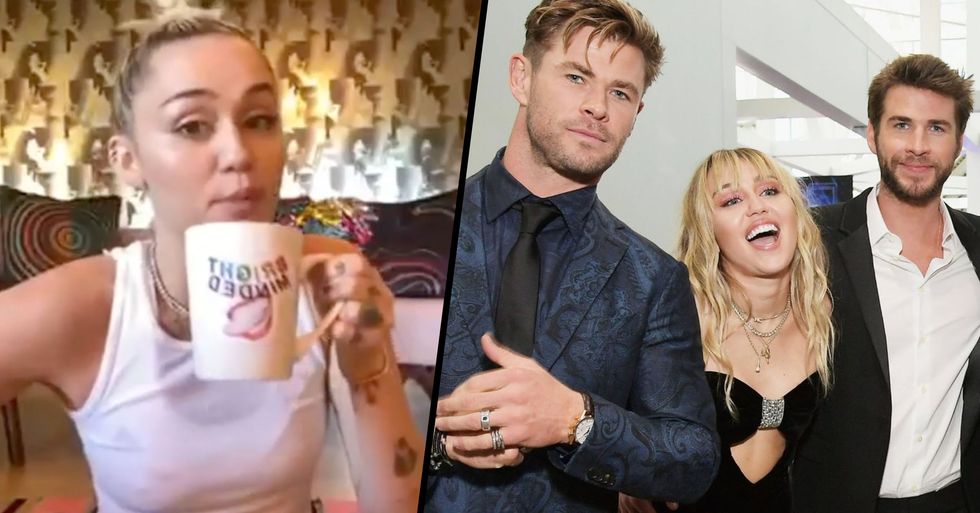 Australian actor, Chris Hemsworth, has recently taken a subtle, yet brutal swipe at his brother's ex-wife, Miley Cyrus, in an interview. But, after her behavior, who can really blame him?

And now, she has responded to her former brother-in-law's shade...

But, before that, they were caught getting pretty cosy while on a trip to the grocery store.

Not quite the romantic gossip we wanted, but it was adorable nonetheless. An E!News insider revealed the information on Thursday after seeing the pair for a "brief moment."

These updates included a picture of Cody rocking up to the hospital with roses and his guitar.

She continued, "I always thought I had to be gay because I thought all guys were evil, but it's not true. There are good people out there that just happen to have d**ks. I've only ever met one, and he's on this live."

But she suddenly seemed to have a moment of humility...

But, just because Liam hasn't commented on his relationship...

It doesn't mean his family hasn't.

Understandably, the rest of the Hemsworth's are going to be "team Liam"...

And, in a recent interview, his brother, Chris, made this quite clear.

Chris recently spoke about his role in the new movie, Extraction...

But he couldn't help but get a little dig at Miley in. The actor spoke about how well Liam is doing, and how he had relocated back to Australia for a "better lifestyle."

And, when discussing the reason that Liam is in such great shape, he said:

"We got him out of Malibu!"

Liam and Miley had a home together in Malibu, California, before their split, and the singer also wrote the song "Malibu" about their relationship.

Though, after her behavior this past year, we can't really blame him, can we?

But it seems that Miley well and truly got wind of this comment...

And she has now responded.

HollywoodLife has reported how Miley feels about the comments...

A source spilled to the entertainment portal, "Miley is aware of the comments but she won’t respond."

The source went on to explain Miley's current situation...

"She’s not with Liam anymore and is very happy in her current relationship so as far as she’s concerned it’s just none of her business what Liam or his family says. She already spoke her truth with her music, she’s moved on now. She’s happy and in love and she’s putting her energy into trying to help as much as she can in this current crisis."

Apparently, Miley no longer wants to be petty.

"Miley‘s focused on the here and now, she isn’t looking backwards. And she doesn’t want to be petty. She wants to move on and hopes that Liam and all the Hemsworths will move on as well."

She is in a good place right now.

"Miley‘s focus is her family, her dogs, her relationship with Cody and her Instagram show that all this week has been about talking to people who are making a difference in the world. Miley wants to make a difference and not get wrapped up in a celebrity feud especially with an ex. It provides no progress to anything at any time. Miley is cool moving forward and that’s that," the source then added.

It seems that Miley has finally decided to act like an adult about this whole situation...

And for more on the infamous pop star, keep scrolling to check out her Tiger King style mullet...