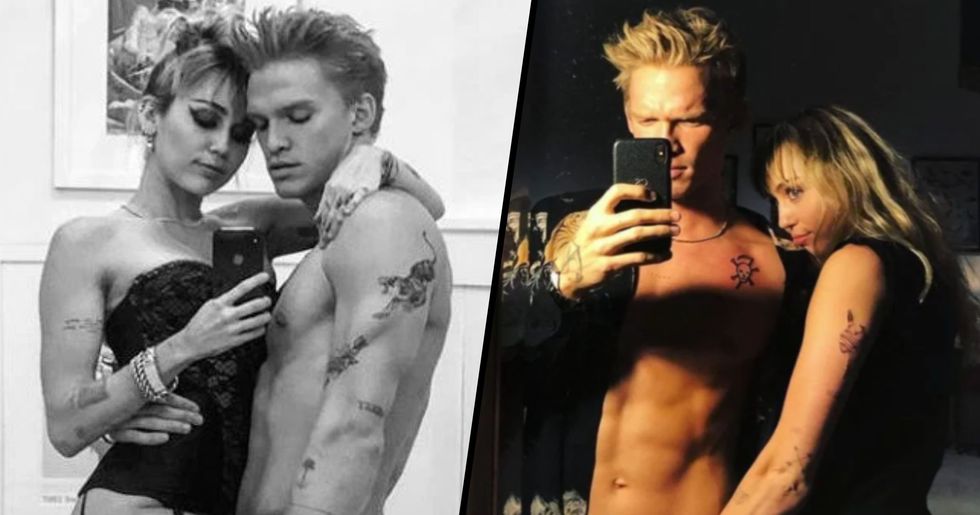 Miley's had a whirlwind of a couple of months. First, fans were freaking out after photos of the star looking worryingly skinny emerged. Then Miley announced her whirlwind and very fast-paced relationship with Cody Simpson. Then she confirmed him as, her boyfriend, and then it seems the star's ex-husband, Liam, is all loved-up with someone new.

After the confirmation, Miley and Cody were all over each other.

But, unsurprisingly, a mere couple of months after Miley announced this "very serious" relationship, it seems that the pair have called it quits.

This year hasn't exactly been smooth sailing for Miley Cyrus...

Taking a break from the demands of being one of the most successful artists of the minute, and all the hype over her and Chris's marriage breakdown, Miley took some downtime with her family. Along with her mom, Miley vacationed with her older sister, Brandi, and her pooch, Bean - who also sometimes gets called "Burrito."

However, fans have still been worried.

This picture caused the most controversy.

If he was the only one saying anything, I'd be tempted to say that the concern was completely unfounded. That being said, he is actually one of many fans to have voiced their worry.

Another Twitter user slammed the growing concern for Miley's health. Cameron argues that anyone commenting on Miley's weight is body shaming the star. Perhaps people really should stop scrutinizing everything Miley does...

Miley didn't seem to be phased by the comments on her weight...

And she was seemingly living life to the full with plenty of love interests since her split from Liam, including a very public fling with Kaitlynn Carter.

But Kaitlynn Carter was soon phased out...

Miley's brief romance with Carter stole our hearts for approximately twelve minutes before things fizzled out.

So Miley went on to find someone else to fill that little void...

And nobody saw it coming...

You remember Cody, right? He was basically like the Australian Justin Bieber back in 2009, making that lovey-dovey kind of music with lines that only turned into lies as we grew up. Love is not as cute as Simpson made it out to be...

Not quite the romantic gossip I wanted, but it's adorable nonetheless. An E!News insider revealed the information after seeing the pair for a "brief moment."

Miley even admitted that Cody was actually her boyfriend.

The 2 seemed pretty loved up.

Miley revealed that Cody was her "BF" on her Instagram stories and, while this had the internet reeling, a lot of people had their minds on the "hospy" part of the caption instead...

And the internet thought so too.

Liam Hemsworth even spoke out...

This isn't the first time Liam has dated post-Miley breakup.

Last time the two split in 2013, he had a brief dalliance with model Eiza Gonzalez.

But as of right now?

Liam seems to have found somebody else too. Last week the actor seemed to go official with Australian actress, Maddison Brown.

As much as I'm Team Miley & Liam until I die, it's clear that she is having fun dating elsewhere so it's only fair Liam gets a nice lady love. Maddison Brown certainly seems nice. Being Australian born and bred works in her favor too, given that one of Miley and Liam's problems was that he wanted to live in Aus.

What does Miley think about it?

Naturally, everyone has been wondering what Miley thinks about Liam's new romance. Despite the fact that the "Wrecking Ball" hitmaker has seemingly moved on with Australia's answer to Justin Beiber, we all know that finding out that Liam has moved on too would have hurt a little bit.

I mean, even if you've basically gotten over your ex, you can't help feeling a little sad when you see that they've moved on. But Miley doesn't even need to compare herself to Maddison Brown... because plenty of people on the internet have already done that for her. Comparing yourself to your ex's new beau is bad enough, but when pictures of the two of you side by side are all over the internet, it must be much worse.

This might explain why the singer has hinted this week as to how Liam acted post-breakup. ...Something that she had previously remained pretty tight-lipped about.

Miley commented under this Vice Insta post with: "#dignity." Now, does this mean that Miley feels as though Liam has ghosted her since they broke up? Or does it mean that she thinks that it's the dignified thing to do - breaking off contact once you've broken up? Her comment isn't too clear. One thing that does seem to be sure, though, is that Liam and Miley are not in a good place right now. I mean, nothing says messy breakup like Insta quote posts, right?

But dignity seems to be absent for the singer now...

Because she posted the most undignified post with her new beau.

She has been very open about her new relationship...

With absolutely no f***s given, in classic Miley style.

But her most recent picture?

Even by Miley's standards, this is pretty outrageous! She and Cody recently got tattoos together which, for any couple, is a pretty big move. And Cody shared a cute picture of the pair sporting their new ink on his Instagram Story.

But in the next picture...

Miley can be seen with her hand thrust down Cody's pants. Wow. Miley was visibly hot and bothered by the photo, with her commenting, "Need. Oxygen. Can’t. Breathe. I. Stan. For. Ever. Ship."

And fans were left very excited over the raunchy pic.

"MILEY WTF UR HAND." One flabbergasted fan wrote. Another told musician Cody jokingly: "Your girlfriend's got her hands full." Her hands are very full indeed...

Miley's life really has completely changed in the space of a few months.

But eh, what's wrong with that?

She seems happy, right? And there's nothing untoward about Miley enjoying herself. Only, people are worried the star has taken things with new beau-Cody a step too far.

When you dig a little deeper...

And discover that Miley is now repping a custom-made Cody Simpson ring you start thinking maybe these guys might be moving a little fast...

Some people are really happy for Cody and Miley.

But is it a little soon for matching tats and promise rings?

Cody Simpson confessing he had an intense childhood crush on Miley Cyrus gives me hope I may yet enter into a Very… https://t.co/M3I5ZDNTJD
— Nick Bond (@Nick Bond)1571692216.0

Well, according to Cody he has fancied Miley since forever and ever, so....?

But we all know what happens when a couple completely rushes their relationship...

Things are likely to very quickly come to an end.

Miley and Cody's relationship now appears to be over.

Reports close to the stars say that the relationship is dead in the water.

The pair aren't ready to cut each other out just yet, however...

An insider told Radar Online, "They are taking a break, but they want to remain friends."

Miley is taking a little bit of "me time."

“She said she just needs to focus on herself."

Their relationship was always suspected to not be as authentic as one might think...

And Miley was repeatedly accused of rushing her relationship with Cody, purely to get back at Liam.

And it turns out that these suspicions were true...

The source added, "This romance with Cody and the constant 'look at me' behavior is all designed to push Liam's buttons."

It seems that Liam has had enough of his ex-wife's behavior...

"To be fair it’s always worked in the past because he’s a good guy who ultimately loves her," the source went on to say. "But now he’s just rolling his eyes and washing his hands of her, even as a friend, which of course is driving Miley nuts."

Liam has been dignified about the whole situation...

Which can't exactly be said about Miley.

Maybe some time alone is what Miley needs...

Because it's true what they say - time is the perfect healer, and perhaps some time spent alone will do Miley the world of good.