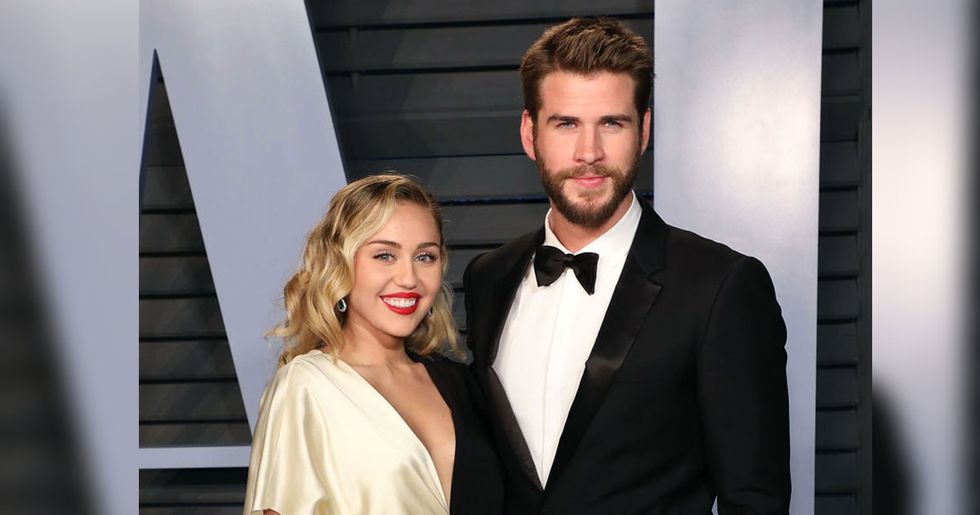 The past three months have been a wild ride for Miley and Liam. From losing their house in the Malibu fire, getting married in secret and dealing with yet another pregnancy rumor. So far, the pair has been very secretive about their wedding and haven't really talked about it in public. Until this year's G'Day USA Gala.

On the red carpet, Liam finally shared how they were feeling about the new chapter in their lives and what it's like to be married to Miley Cyrus.

One proof of their happiness was Liam's on-stage speech, during which he expressed how thankful he was for his "beautiful wife." The speech clearly showed they were still getting used to calling each other husband and wife, which made Miley's reaction to the speech all the more endearing.

Could this couple be any more "relationship goals"?

The ceremony was very small and intimate, with only a few close family members and friends around.

But only a few days ago did the newlyweds finally broke the silence on their secret wedding.

“[Getting everyone together] wasn’t hard — we have a small group of friends," Liam reportedly told Extra.

"It was mainly immediate family, and sort of a spur-of-the-moment kind of thing."

“We’ve been together for the better part of 10 years, so it’s same-same, but different [being married] I guess," he added when asked about how their lives had changed since getting married.

"But it’s all wonderful and I feel lucky to be with her."

He told E! the same thing, joking, “It’s great — the ring fits. It’s great, it’s an awesome thing to get through."

"Not much about the relationship changes [after marriage], but you kind of have these sort of — the husband and wife thing, it’s great. I’m loving it. I’m really, really happy and grateful to be in the position I’m in."

On Instagram, she wrote “I knooooowwwww, right," confirming that she did marry “the hottest man in Hollywood," People reports.

"I feel so lucky to be with someone like her. It’s great. [I’m] very, very, very lucky." Liam added when talking to Entertainment Tonight.

We finally gained all of this "insight" into their marriage on the red carpet of G'Day USA Gala in Los Angeles.

Insider says, the event is held to honor Australians for their achievements in the US.

Miley was there to support Liam, and she looked stunning. As usual.

Page Six says she showed up wearing black velvet gown with a "seriously plunging neckline," matching heels, layered necklaces and bracelets. (One of the necklaces was a marijuana leaf symbol, of course.)

But we're not that surprised.

That's because we know Miley loves outfits that are "equal parts daring and glamorous," and she definitely loves dresses with deep necklines.

Except that time it was a "glossy, floor-length black gown by Stella McCartney" with a similar plunging neckline, Insider reports.

The dress she wore this year to the G'Day USA Gala was "from Jean Paul Gaultier's Fall 2005 ready-to-wear collection for the French fashion house."

Her hair was down and tousled.

According to Page Six, her makeup matched the outfit and hair in that it was simple and classic, with a subdued eye look and red lipstick.

Liam was classic Liam as he wore a fitted black suit, white shirt and matching tie.

That day he was awarded the G’Day USA Excellence in Film award for his outstanding acting in movies, such as The Hunger Games and Independence Day: Resurgence.

At the time of the Gala the pair had just celebrated their one-month marriage (which is already an achievement, considering today's divorce rates.)

And as Glamour noted, they must still be getting used to calling each other husband and wife.

So when it was time for Liam to get on stage and make speech, he didn't forget his wife.

In his speech, he called Miley his "beautiful wife" to which Miley had the best reaction.

It was so sweet and funny at the same time.

Liam's "Thank you to my beautiful wife" made Miley's jaw drop and the audience break into applause.

Then her surprise turned into a smile as Liam continued to shower her with praises.

The audience laughed as Miley yelled at him, "There's more! There's more about me."

But Liam didn't give in to this domestic pressure, saying, "I'll tell you later."

Although it was Liam's well-earned big day, Glamour says he felt a bit embarrassed, just like every time he receives an award. Can't relate...

"I was just saying, I get embarrassed I get awards for acting because I already feel so privileged to do something that I love so much," Liam told ET, as reported by Billboard.

"It's such a great position to be in, but I'm very thankful and grateful to receive this award. It's really cool."

So what's next for the couple now?

Definitely not children, as Miley has recently debunked a pregnancy rumor on Twitter.

“I’m not ‘egg-expecting’ but it’s ‘egg-celent’ to hear everyone is so ‘happy for us’ … we’re happy for us too! ‘Egg-cited’ for this next chapter in our lives … Now, can everyone leave me alone and go back to staring at an egg."

But they're diving full back into work. At least Miley, that is, who we might soon get to see starring in the fifth season of Black Mirror, says Daily Mail.

"I play one character, but I play a lot of different sides of that character and there’s a lot of dimension to it," Miley said on The Howard Stern Show.

"It was the first time I've left somewhere feeling really proud of my work...but you know if I like it that might mean it's horrible."

Billboard says she has recently shared photos of herself and producer Andrew Wyatt in a studio. That's a hint.

In one photo she held small California plates.

The plates spelled out the name of the songwriter and record producer, as well as a photo in a recording booth. She also wrote, "STU YO."

Andrew has been nominated for several Grammy awards and has worked with such high-profile performers as Dua Lipa, Bruno Mars and Lorde.

Capital FM has reported that in a recent interview Miley said, “I don’t have any definite dates, but definitely in the new year you guys are gonna be hearing a lot more music."

She admitted she was “over" her last album and she was “already two songs deep on the next one."

Big Top 40 says Miley has teased it might be in June 2019 that the new album will be released.

It's not yet known what the new album style will be like, but we do know that Miley has reunited with producer Mike Will Made-It who worked with her on Bangerz.

Miley's also hinted that "Mike's songs will have a hip-hop vibe, Mark's [Ronson] will be classic and rock, while Andrew's [Wyatt] have a pop sound."

But for now you can still listen to her and Mark Ronson's new single "Nothing Breaks Like a Heart."

Billboard says the song "peaked at No. 43 on the Hot 100 earlier this month."