Another classic that has been added to this list is none other than the 90s classic that is American Beauty. | 22 Words 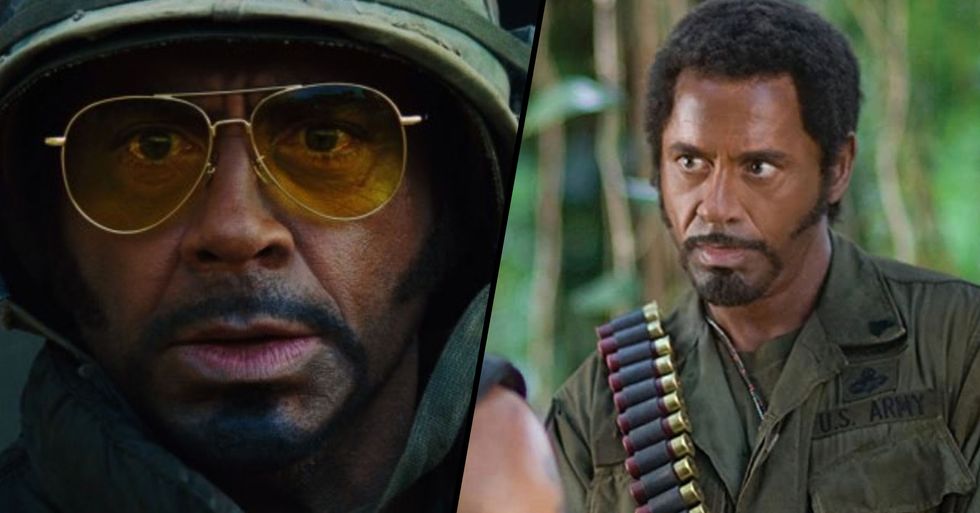 Millennials Are Watching 'Tropic Thunder' and Are Realizing Something Awful

The film industry has always been riddled with controversy after controversy but there are just some films that have not aged well at all... The latest one is Tropic Thunder which has re-ignited another very sensitive debate amongst Millenials that have just discovered the movie.

There are some films that just wouldn't get the green light in 2020.

While some people think it is because of the "snowflake generation", others have claimed it's because they are just plain offensive.

You know what I'm talking about right?

Take this as a small example. Remember the Christmas classic that is Baby It's Cold Outside?

That song was canceled in 2019 after an analysis stated that "date rape" was the main storyline.

John Legend and Kelly Clarkson re-wrote the late 40s track to fit in the modern era and essentially wipe out any of the controversial lyrics.

However, people claimed "cancel culture" was ruining the vintage era.

But to be honest, certain industries do need a good to cleanse and the film industry is probably the biggest one.

Here are some old movies that would never work in the Millenial world, including Tropic Thunder, which has recently caught everyone's attention, yet again.

Let's start with The Graduate.

Produced in 1967, this movie isn't generally considered outdated, but highly problematic for its portrayal of one particular social issue.

If you've watched the movie, you'll know that there were several points to pick up on...

And one of the main ones isn't even the drastic age difference between leading characters or that Benjamin Braddock hooked up with Mrs. Robinson and then started dating her daughter, but it's very questionable...

It's this part of the storyline...

So, in one scene, Mrs. Robinson "seduces" Braddock by taking him to a room and removing her clothes but later on the film, she then goes on to falsely accuse him of rape.

According to the FBI, however, only 8% of rapes are actually false.

But the Graduate made it seem like it was a thing women did often and very easily. Studies have stated movies such as this one actually perpetuate false accusations and can lead to issues in society... Cough, Brett Kavanaugh, cough.

And in a similar case, Gone With The Wind also gave us some problematic scenes.

Made in 1939, you can probably imagine just how controversial this sort of film would be now.

Its portrayal of harmful black stereotypes really rubbed people up the wrong way.

Even at the time, there was some outrage about the issue. That must say something. Not only that, but there was also a horrible rape scene that conveyed that women actually enjoy being assaulted.

Lester Burnham's inappropriate obsession with a sixteen-year-old is not just uncomfortable to watch, it is nauseating.

And things got worse as we found out that Kevin Spacey was actually accused of sexual misconduct...

So people have rightfully barred that film from ever being played again. Thank God.

However, at the time, it was commended as a work of art.

Despite being problematic as hell, the movie won 5 Academy Awards including Best Picture, Best Director, and Best Actor. Big yikes or big yikes?

And the latest film to steal that "cancel culture" spotlight is Tropic Thunder.

Starring Robert Downey Jr., this 2008 action-packed comedy was an absolute hit at the time that is was released.

It even went on to win an Oscar!

With a 7/10 on IMDb and a 91% positive rating, we're all wondering how our society let this slide.

As more and more Millenials blindly stumble across the movie, it re-ignited a prominent social issue.

Why is blackface so offensive?

For those of you that still don’t seem to understand why black/brown face is so offensive, firstly, sort yourselves out. Secondly, we’ve got some facts for you.

Look it up. It happened in all sorts of places, from comedy shows to Halloween costumes. They would even go as far as comparing black people to monkeys while simultaneously acting in a humiliating manner to depict them as uncivilized.

So if you've got a few brain cells, you would avoid it altogether.

Ain't that right, Justin Trudeau? And don't worry Karen, you can still be Beyonce for your costume party without painting your face.

Anyway, it seems as though people have just realized the "black man" in tropic Thunder is actually Robert Downey Jr.

And their reactions have been justified...

It is pretty sickening.

This user also had a similar response to the revelation...

We don't need to see blackface on our screens. Ever.

And what makes it worse is that Downey Jr. has "no regrets" about the role.

Only a rich white man could get away with stuff like this in 2020. If someone hasn't already, can a Millenial please cancel Robert forever? You'd be doing us all a favor. Keep scrolling if you want to read more about why Justin Trudeau has absolutely ripped apart for his involvement with blackface...