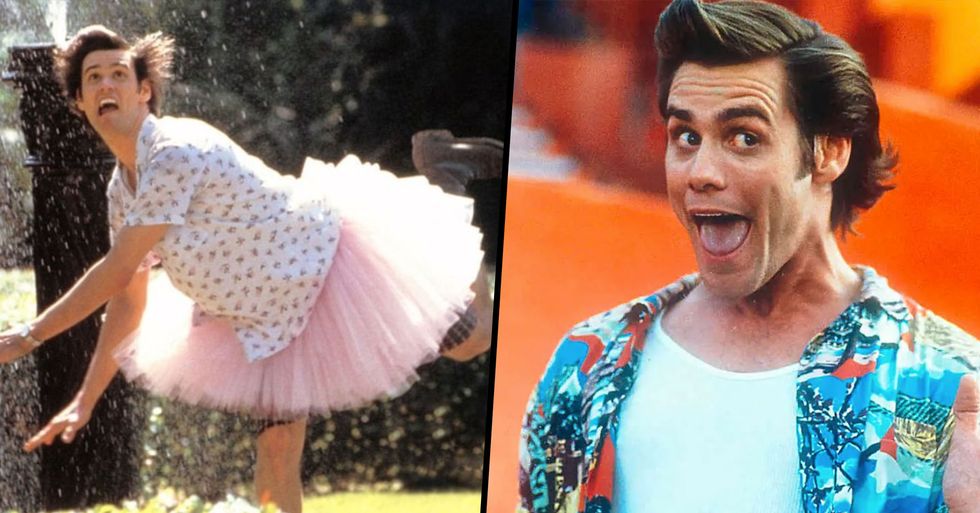 When re-watching a childhood classic, it's surprisingly easy to notice some slightly problematic areas, which were just par for the course during first viewing. Think about what happened to Friends. The classic sitcom came to Netflix, and everyone realized how terribly the show treats queer people, minorities, and fat people alike.

Father time can be cruel, especially in terms of comedy, and as we become more and more aware of how we treat others, our past viewing pleasures have to come under the microscope. The latest victim? Jim Carey comedy Ace Ventura: Pet Detective.

Podcaster and radio host Joe Rogan spoke out about the movie this week. There's one scene in particular Rogan drew attention to, and it turns out, he's not the only one who's noticed.

There's nothing better than a good laugh.

If you're feeling blue,  then enjoying some humour is one of the best ways to get you out of a funk. Perhaps this is the reason comedy can end up being so close to all our hearts.

But sometimes, laughs can be harder to come by.

It's hard to truly enjoy a "funny" movie or TV show if all you're thinking about is how offensive and problematic the humor is.

In the past, most jokes were fair game.

But nowadays, we've all learned and grown up. Humor made at the expense of someone else's feelings (particularly of someone who's less privileged) just doesn't seem that funny anymore.

The "rewatching effect" has claimed many victims.

The most notable example is likely Friends, which came to Netflix and was quickly torn apart for its problmatic content. The latest victim? Jim Carrey vehicle Ace Venture: Pet Detective.

He plays a detective who specialises in animal-related mysteries, with a signature quiff and a surreal, slapstick style. The movie was a huge commercial success at the time.

The story centers around a missing football mascot.

Carrey's mission is to track down Snowflake, the dolphin mascot of the Miami Dolphins, who has vanished under suspicious circumstances.

One of the weirder aspects of the movie is how many characters die.

The way death is played off as a punchline gives the movie a slightly dark tone, and seems like a strange choice for a kid's film.

But there's something even worse.

On top of the strange prevalence of death, people have noticed something even more disturbing about Ace Ventura upon re-watching.

The phenomenon was brought to the world's attention by Joe Rogan.

Rogan is a former television host and actor, who is now best known for his stand-up comedy and prolific podcasting career.

Rogan claimed he was sitting down with his kids to re-watch a classic movie.

Rogan's two kids are eight and ten years old. As he settled in to watch his old fave with them, Rogan realized something unpleasant about Ace Ventura.

Speaking on his podcast, Rogan spoke out about what he'd seen.

"Do you know what I made the mistake of doing yesterday? I watched Ace Ventura: Pet Detective with my eight-year-old and my ten-year-old. I didn’t realise how transphobic that f**king movie is," the Indy 100 reports.

The movie's problems center around the treatment of one character in particular.

The character in question is Lois Einhorn, or Ray Finkle. Finkle is a football player disgraced at the Superbowl, who then becomes Einhorn.

At the film's climax, this is revealed.

Ace Ventura humiliatingly strips Einhorn down to her underwear in front of police officers, to "prove" who she "really is."

This scene gets even more graphic.

Ventura turns Einhorn around to show the cops the nature of her genitalia. It's honestly hard to watch, and seems a particularly disturbing choice for a kids movie.

Even worse is the cops reaction.

After seeing Einhorn in her underwear, the police have a very visceral reaction. "All the cops are throwing up ... It's off the charts. Everyone is freaking out. It is so insanely transphobic," Rogan shared.

The movie cuts to Ventura remembering his crush on Einhorn, his subsequent pursuit of her, and the fact the two shared a kiss. Upon realizing this, Ventura breaks down in tears.

The detective has an enormous freak out.

The reaction is played for laughs, but in today's climate seems anything but funny. In fact, the whole story line has us cringing.

As we as a society move towards acceptance, looking back is pretty uncomfortable.

Nowadays, it's unimaginable that such a story line would exist in a film - let alone a mainstream blockbuster aimed at children!

And Rogan isn't the only one who's noticed.

Model and trans activist Munroe Bergdorf has also drawn attention to the damage the Ace Ventura: Pet Detective plot line could do to trans people.

"As an 8 year old, I remember watching the film Ace Ventura: Pet Detective, starring comedian Jim Carey, at a classmates house after school. Sorry to ruin the ending if you haven't seen it (don't bother), it ends in the movie's villain being caught, stripped to her underwear and exposed as in fact 'a man'. Then to add insult to injury, everyone in the room starts vomiting as they have all engaged in sex with her. This film was given a PG certificate. Imagine being eight years old, knowing that you're transgender but not having the language to verbalise it and then seeing a scene like this including a trans person, played by a cis woman - it may see trivial to some but I carried that 'punchline' throughout my adolescence, it made me feel guilty and confused about who I truly was, so I pushed my true self into my subconscious and tried to be someone I was not," she shared.

This emotional passage makes for some pretty difficult reading.

Humor is one thing, but if it's at the cost of doing unknown harm to a vulnerable, lost and confused child, it seems like the joke just isn't worth it.

It's enough to make you question how the movie got made.

Even in 1994, the plot line seems a little bit of a weird choice, if not overtly problematic. And seen through today's lens, it's quite simply hard to watch.

Although some have leapt to the movie's defence.

A commenter on one article wrote, "Can I just point out that Transphobia wasn't added to the English dictionary until 2013, which means it was only a known term after 2003. Ace Ventura was released in 1994 before the internet was even a well established thing, the writers probably didn't even know what transphobia even is."

Others tried to explain why the joke was not problematic.

Another comment reads, "It's not 'transphobic' as Rogan claims.  If everyone had known from the start that Lois Einhorn was Ray Finkle then the joke wouldn't have worked.  The whole point of the joke was that the men all fancied a 'woman' that ended up being a man.  Any straight man would react the same if they had been duped like that, if they claim otherwise they are not straight lol." Erm, what?

There is, of course, another defence for the movie.

Some claim it's a comedy, designed to make people laugh, which makes the "joke" OK. If something's funny, then it doesn't matter who it hurts - or so their argument seems to go.

It seems some may just be being controversial to provoke a reaction.

"What a complete load of rubbish. Yet another attention seeker who needs to get a life," writes one, particularly vitriolic commenter.

How about we all show a little more compassion?

Just because something hasn't adversely affected you personally, that doesn't mean it doesn't matter. Understanding that other people count too is just so important.

The fact the film is nearly twenty-five years old doesn't excuse it.

The fact is, it's 2019 now. That means we need to look back and own up to our cultural mistakes, in order to avoid making them over and over again.

Humor doesn't work as an excuse.

But there is something positive we can take away.

The shocking nature of this story line shows how far we've come - even though we still have a long way to go. As Rogan puts it, "When I saw that movie I was ten. Transphobia was not a thing. Now it is a thing. That's good. That's good news."