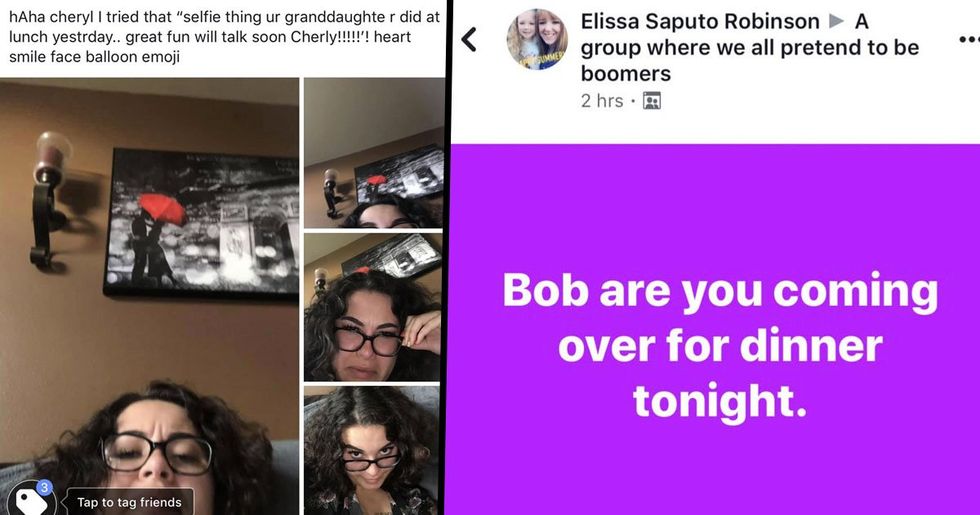 According to the internet, Baby Boomers (those born between 1946 and 1964) and Millennials (those born in the 1980s to early 2000s) have gotten off on the wrong foot and are still finding it difficult to co-exist peacefully. To generalize, most Baby Boomers think that Millennials are a bunch of brats who haven't had a taste of the real world; apparently, they only see life through their camera lenses and filters. I was born in the Millennial generation and even I have to agree with those statements.

Recently, a Facebook page has popped up wherein Millennials are pretending to be Baby Boomers and the posts are extremely funny. It did take me a while to understand what was happening, but, when I got it, each post just got funnier. I'm going to share a bunch of my favorites with you now. See if they manage to tickle your funny bone, too!

The internet is actually going crazy for these memes!

So sit back, relax and enjoy!

What is with Baby Boomers and posting bad news with bright colors? It doesn't make the news any better!

Unfortunately, Baby Boomers haven't got the hang of this "slang" thing.

But props for the effort!

How many times are we going to see irrelevant, blurry pictures on Facebook?

With awkward conversations in the comments...

Can someone let the Baby Boomers of the world know that you can now find everything on your phone? Yes, even the app store!

It seems as if these weirdly colorful backgrounds are a recurring theme with Baby Boomers...

And, of course, we have the comments on the post to match!

Have you ever been sent those awkward pictures by your parents trying to express their emotions? Because I have. And even though I keep telling them that it's not cool, they keep sending them my way.

And they never seem to want to include pictures of the actual product...

This one really made me chuckle.

And, of course, the comments have to be as random as the actual post...

Well, as random as they are, at least they're kind of nice... Apparently, Baby Boomers are more likely to leave positive feedback on posts as opposed to negative ones, so they definitely have got one thing going for them.

The age gap between the two generations means that they can't really bond over their music tastes. "Loona" is actually a K-POP group, but that might only be a thing that quirky Millennials know about. And no, BTS doesn't refer to only "behind the scenes" anymore...

I mean, I didn't find this funny... But it seems as if Madeleine and her friends did. Well, until she trailed off into politics. #MAGA.

Um, I feel like I've intruded on an awkward conversation here... So I'm going to just go.

At first, this just seems like another one of those weird, colorful background posts. But it's not.

Have a look at the comment at the bottom.

I don't think that I've ever laughed so much in my entire life.

Why do Baby Boomers love capitalizing random words in their sentences? And don't even get me started on the thumb in the picture. I've seen that one too many times!

We can't forget about all of the dad jokes in that group, can we?

According to this post, Lorde, the singer, based her name on the actual Lord... Can someone please inform her that is incorrect before she starts a petition?

What is with Baby Boomers and selling their stuff on Facebook? Well, this person has decided that they're going to have a garage sale... A very special one.

And this smart ass thought that he would point out why it is so special.

According to the caption, it lasts for a total of zero minutes, but don't worry guys, she's going to have another so you don't miss out!

Grab the popcorn, I don't think that this battle is going to be ending any time soon.

We're just waiting for the Baby Boomer generation to clap back at the Millennials.