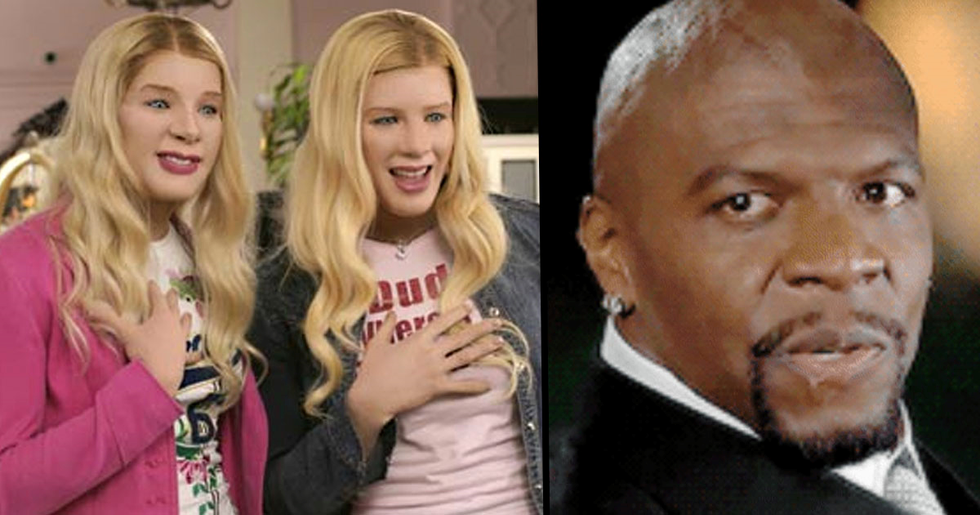 Millennials Are Re-Watching 'White Chicks' and Calling It Super Offensive

It was a 2004 box office hit comedy starring the much-loved Wayans brothers, but people are now re-watching White Chicks and wondering whether it is still as funny as it once seemed.

Littered with offensive jokes, sexist references and, some are saying, racism, this comedy that was once so popular may not stand the test of time with today's politically correct society on its back.

And with rumors of a sequel on the cards, could this hit flick quickly become a miss?

Let's take a look at back at some of the most popular scenes. Are they are still fabulously funny or are they now more outrageously offensive?

White Chicks first hit our screens back in 2004.

To put it into context, 2004 was also the year that Facebook was founded, Janet Jackson's breast was exposed by Justin Timberlake during the Super Bowl and Meet the Fockers was released.

Marlon and Shawn Wayans had starred in several movies together before White Chicks, including Scary Movie, Scary Movie 2 and The Little Man.  At this point, everything they touched turned to gold. Literally.

And White Chicks was no different.

For those who have not seen White Chicks, the movie involves the Wayans brothers dressing up as, you guessed it, white chicks. Playing two FBI agents who go undercover as Tiffany and Brittany Wilson in order to solve a kidnapping case, the Wayans are hilarious as ever in this 2004 movie.

Although critics panned it, filmgoers couldn't get enough.

It grossed $19.7 million in its opening weekend and finished with $70.8 million at the box office in the U.S. alone. We think we could cope with critics hating us if we made that kind of moolah.

So, let's take a look at some of the most popular scenes - some may not be quite so appealing today.

We absolutely love this scene - possibly Terry Crews' best performance ever! His rendition of 'A Thousand Miles' is up there with the funniest things we've ever seen. We could literally watch it a thousand times and it'll never get old.

Although, to be fair, most of his scenes are hilarious.

Take this one, when he and Tiffany go on a date. What man doesn't love a girl who isn't afraid to eat more than just a green salad on a first date?

And then there is the car scene.

That awkward moment when you don't know the words to that song... We can totally relate girls (or dudes, whatever). Just style it out.

Plus some good old toilet humor.

Poor Tiff, we've all had one of those embarrassing incidents when lunch just hasn't agreed with you and there is nothing you can do about it. And it's even worse if you have an audience!

And don't forget about the obligatory "yo momma" jokes.

Some people are just better at yo momma jokes than others, and Tiffany and Brittany completely smash it! Those other two didn't stand a chance.

We all know what it feels like to try, and epically fail, to look cool in front of your crush. And it certainly doesn't help matters when your rival rocks up and calls you a "coke whore"! Totally harsh!

And what comedy is complete without an old fashioned dance off?

And we are loving these classic moves. Go, Tiffany! Go, Brittany! You got this girls!

And now it seems a sequel is on the cards.

Terry Crews has recently got fans of the movie all excited by revealing he is staying in shape for White Chicks 2.  "I will never, ever get out of shape because that movie's going to happen one day."

And Marlon Wayans himself has previously suggested the same thing.

Back in 2015, Marlon shared a fake poster for White Girls 2 on his Instagram, saying that if it received 3000,000 likes he would make the next instalment.

And since Terry Crews' recent revelation, fans are getting just a little bit excited.

@DailyMailCeleb @terrycrews Is there any truth that you are doing a white chicks 2 please? This is my favourite film of ALL time!
— Sam arnold (@Sam arnold)1552896817.0

Please, oh please, let it be true! To be fair to the fans, they have been waiting fourteen long years for this. And counting...

But news of the sequel has caused some millennials to re-watch the original movie and they are not amused.

In fact, they are completely offended and outraged by this very un-PC movie from 2004. Although to be fair, some never liked it back then either.

This guy definitely thinks it's racist.

And we can kind of understand where he is coming from. In recent years, people have been called racist for a lot less than this.

And some think it's pretty offensive to women, too.

The Wayans brothers were also clearly mocking the "dumb blonde" stereotype in White Chicks. This may have gotten laughs back in 2004, but not in today's society. Hell no.

And to add insult to injury...

Many white women of the world believe that they have even more reason to be offended as they understand that they are being mocked for both their sex and their skin color in White Chicks. Not cool guys. Not cool.

If nothing else, the timing isn't great.

With all the recent outrage about "blackface", is it really the best time to be announcing a sequel to a film where two black men dress up as white women? We think not.

This Twitter user thinks that it's an issue of double standards.

Should we be outraged about this or is this a completely separate issue?

Would it still have been funny if it had been the other way around?

Even back in 2004, when people were a perhaps a little less PC, would it have been okay for the film to star two white men dressing up as black women? Maybe. Maybe not.

Others just think that the movie is offensive to the whole comedic film genre.

Obviously, comedy is a subjective matter, and some are just not feeling this movie full stop. Oh well, each to their own.

And yet another Twitter user who is not a fan.

That's quite a statement to put out there: the "worst film of all time." Have they not seen Elizabethtown starring Orlando Bloom and Kirsten Dunst? Now that was a bad movie.

Hindsight is a powerful thing.

Looking back now, perhaps this film was both racist and sexist. But times were different then, as were attitudes.

And this isn't the only popular movie that millennials are finding offensive.

American Pie is being called sexist and offensive to women. Does that fact that it was 'laugh out loud' funny mean that it can be forgiven for its moments of sexism? We haven't made our minds up on this one.

The man himself ("Bond, James Bond"), is being accused of being a sexual predator as a result of his naked shower scene with Berenice Marlohe in Skyfall.  And don't even get these critics started on Sean Connery's portrayal of Mr. Bond.

Seinfield is in for a world of pain.

Using the word "Nazi" in a joke is never going to go down well in this generation. Even if it's in relation to something as innocuous as soup.

Not even our beloved Friends is safe from their wrath.

There are many elements of Friends that millennials are against: a lack of diversity in their casting; Chandler's attitude towards his homosexual, drag queen father; the fat shaming of Monica; Joey's attitude towards women. The list goes on and on.

Is the sanctity of comedy no longer valued? Is finding humor in serious issues the best way to open a dialogue about them? Are we offended too easily? Or should comedy and political correctness become intertwined for a better viewing experience for all? Either way, it is truly the end of an era.