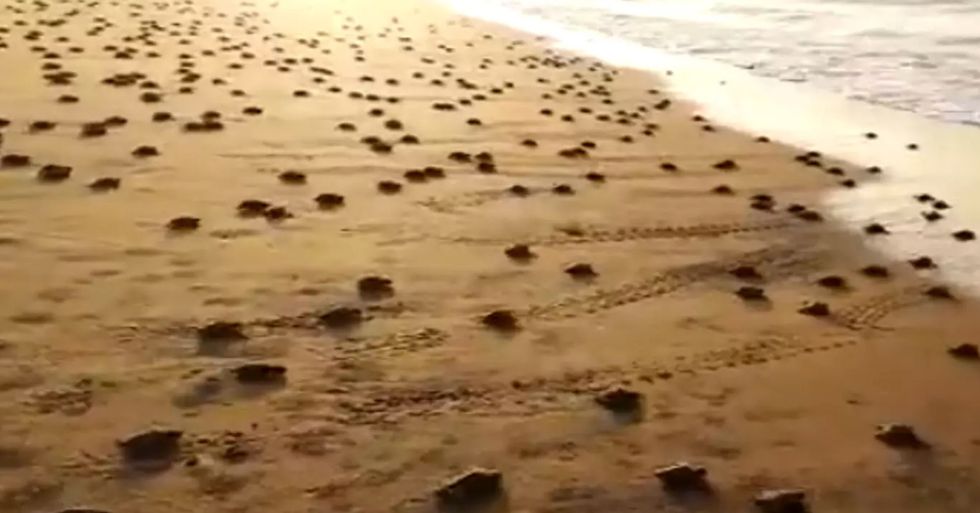 Millions of Baby Turtles Head to Sea on Empty Beach

Now that millions of us all over the world are quarantined indoors, our sea turtles have finally been given the fighting chance to head to the sea and start their lives. However, even without one obstacle, another remains and it may not be exactly what you think it is...

Keep scrolling for the amazing video footage of the turtles on the beach...

And this has hugely benefited our turtles, in particular.

Turtles have long suffered at the hands of humans.

And things have been just as bad on the shore.

Overcrowded beaches have meant that the turtles nesting routine has been disrupted massively.

For millions of years, turtles have been laying their eggs on various "nesting beaches"...

Where they leave them to hatch alone. And, once hatched, the hatchlings independently make their way back into the ocean.

But, as a result of these nesting beaches becoming overridden with tourists...

Turtles have been unable to nest as easily as they were once before, and hatchlings have been struggling to make it safely back into the ocean without being captured or killed by humans first.

Nesting beaches all over the world remain void of people and pollution, meaning our baby sea turtles are finally able to nest peacefully.

And down on the beaches of India, the most incredible thing happened...

Footage that has been described as "magical" has surfaced showing over twenty million baby turtles heading down to the sea.

The district forest officer for Berhampur, Amlan Nayak described it as "special."

He told Mongabay-India this: "The last time we saw day time nesting of olive ridleys along this site was in 2013. Usually, they come on to the beach for nesting only during the night. This March was special for us as we saw the species visiting the site at night and even during the day, in equally good numbers."

The president of Orissa Environment Society also told the outlet this:

"The turtles want a clean and dry beach. They have to feel safe. Since September 2019 efforts were on to clean the beach. Due to the debris deposited on the beach following cyclone Titli."

But unfortunately, in India, it seems as though there's another obstacle that has hindered baby turtles further.

Times of India reported that hundreds of baby turtles in the area actually died due to getting caught up in the plastic finishing nets that were strewn about the beach. The weight was just too much for them to fight out of.

For more cute animals, scroll on...