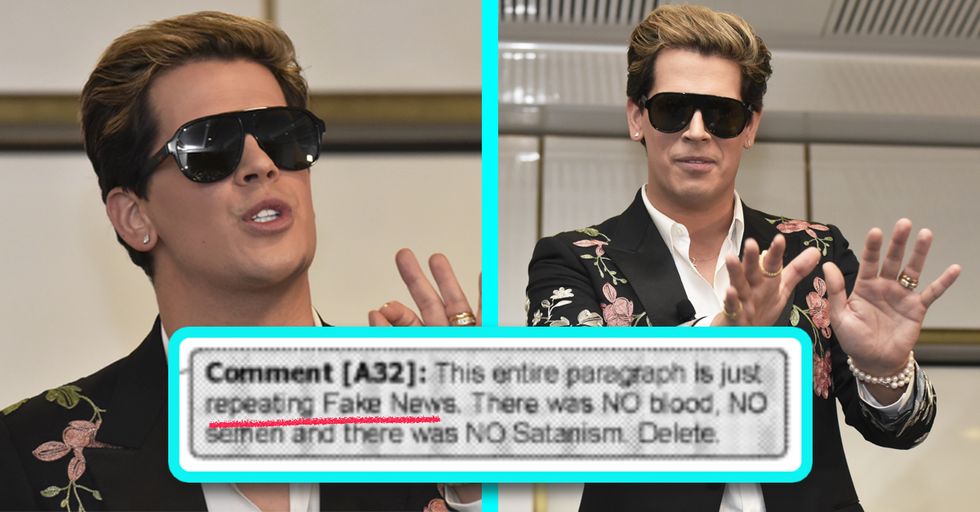 Neo nazi trollmaster Milo Yiannopoulis has come a long way from his days of social media domination. Once upon a time, he was the golden boy of the alt right, favored for his poison pen, sarcastic tongue, and uncanny ability to claim multiple minority statues while actively advocating for the hate of said minorities.

In his heyday, Yiannopoulos could command armies to harass SNL actress Leslie Jones, and was known to hold forth extensively on such scintillating subject matter as "Why Black Lives Don't Matter." In late 2017, however, Yiannopoulos' hateful house of cards came tumbling down when it emerged that the white supremacist firebrand had made comments seeming to endorse pedophilia.

In the aftermath, all but his most loyal legions fled, he lost his invitation to speak at conservative conference CPAC, as well as a $250,000 book deal with Simon and Schuster.

But where did Yiannopoulos come from?

The answer, as with most things on the internet, starts with Gamergate.

Do you remember Gamergate? In August 2014, the labyrinthine, toxic internet saga began when the ex-boyfriend of a female game-developer wrote a series of  blog posts accusing her of having slept to the top.
The resulting internet fracas exposed long-hidden racial and sexist tensions in the gamer community and larger internet culture. In the middle of all this emerged Yiannopoulos, a racist, misogynistic export from the United Kingdom, gleefully prodding his army of trolls to greater heights of racist and sexist excess.
Yiannopoulos was every white supremacist's dream – a gay, catholic half jew unabashed in his love for "black dick" and extremely well versed in the art of dog-whistling his hatred for feminists, jews, people of color, women in general, and any and all categories that did not fit into the category of straight white male.
Even better, he had an ace up his sleeve – plausible deniability. To those who excoriated his penchant for wearing an iron cross medallion, indulging in light readings of Hitler, and fondly posting a Holocaust meme or two, there was his jewish heritage, conveniently passed down on his maternal side.
Naysayers about his racism against black people could look to his loud and frequently proclamations of his love of "black d*ck," which he even went so far as to lionize in a column for Breitbart during which he asked, “am I racist for not dating white dudes?"
Yiannopoulos was everything the white supremacist movement could ask for, which was why he was such a visible figure in the caustic campaign to elect Donald Trump, a man who he fondly referred to as "daddy" into the highest office. For a brief, shining moment, Yiannopoulos was at the top of his game. Then it all came crashing down with his aforementioned comment celebrating pedarasty.

Now, Yiannopoulos is unemployed, and reportedly running out of the income he stocked with his hateful ways, which is why he's out to sue Simon and Schuster for $10 million for breach of contract over his lost book deal. The publisher isn't letting themselves fall easily, however.

I went to the New York county clerk’s website and found this filing. It includes the entire manuscript with allllll… https://t.co/LJy54cv31f
— Sarah Mei (@Sarah Mei)1514461715.0

As part of their strategy to prove that Milo's book wasn't up to par to begin with, the  publisher submitted documents containing editor Mitchell Ivers’s notes to the court. They are, in a word – brutal.

Among other gems, Ivers noted that Yiannopoulos should have " 'stronger argument against feminism than saying that they are ugly and sexless and have cats' and that another chapter needs 'a better central thesis than the notion that gay people should go back in the closet.'"
In fact, in the very prologue, Ivers tells Yiannopoulos, "Throughout the book, your best points seem to be lost in a sea of self-aggrandizement and scattershot thinking." He further adds, "Careful that the egotistical boasting … doesn’t make you seem juvenile."

The Guardian writes that "Ivers frequently calls on Yiannopoulos to back up his assertions in the text. In the first nine pages of chapter one, notes include: 'Citations needed', 'Do you have proof of this?', 'Unsupportable charge' and 'Cite examples'."
Then, of course, there's all the times Ivers has to warn Yiannopoulos about his racism and sexism. As The Guardian expounds.

“The use of phrases like ‘two-faced backstabbing bitches’ diminishes your overall point," reads one comment. “Too important a point to end in a crude quip" is another. “Unclear, unfunny, delete," reads another. The early sections of a chapter on feminism prompt the note: “Don’t start chapter with accusation that feminists = fat. It destroys any seriousness of purpose."

Finally, around page 84, when Yiannopoulos calls for feminists to be thrown out of academia, Ivers loses it and writes, "DELETE UGH."
As Damon Young of Very Smart Brothas explains:

Most (good) editors are aware of how sensitive this back-and-forth can be, and while they don’t hold back on their criticisms, they do choose language that’s meant to be constructive instead of insulting. So an editor saying something like “DELETE UGH"—which Yiannopoulos’ editor does when addressing his thoughts about feminism—is basically him saying “FUCK YOU, YO MAMA, AND THE HORSE Y’ALL RODE IN ON!"

Indeed.
While it's all good and well for Simon and Schuster to release these notes in an attempt to present themselves as the moral right, let us not forget that they gave Yiannopoulos, a noted racist, sexist, homophobic Neo Nazi troll $250,000 to espouse his said racism, sexism and homophobia via a major platform, over the protests of such writers as Roxanne Gay, who dropped the publisher in protest. It's all good and well to make yourselves look like the good guy in hindsight, but point of fact, Simon and Schuster courted Yiannopoulos and gave him a platform. As the proceedings wind their way through court, let us never forget this simple, incontrovertible fact.