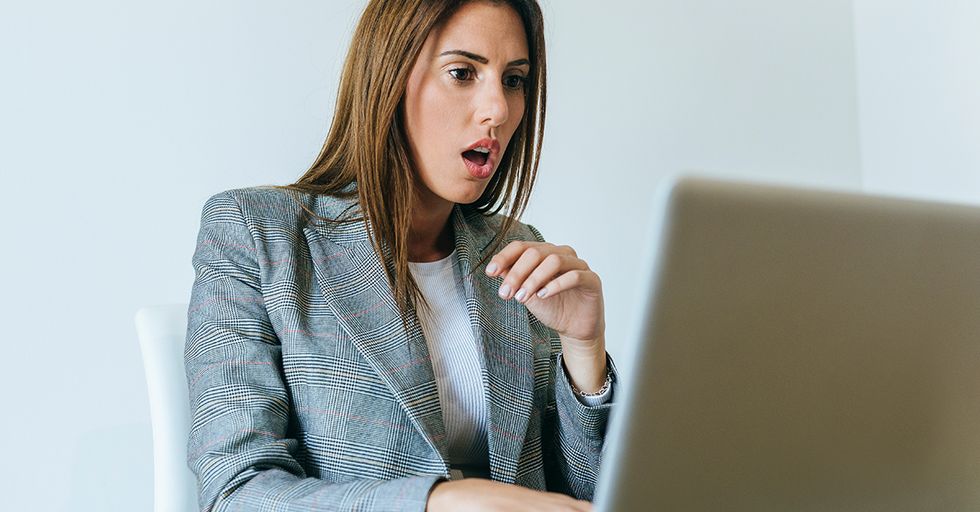 29 Tweets That Will Make You Question Everything You Know

Every so often, a great mind appears among us to deliver a small token of wisdom. Often, these clever remarks come from viewing everyday normalities in a different perspective. Maybe they are observations about the world around us that only the most curious, passionate souls can bring to light. Perhaps they are new ways to look at an old thing. Whatever these nuggets of sageness are, they all have one thing in common: They will blow your mind.

They will make you see the world differently. The sun might shine a little brighter. The air might feel a little crisper. Your surroundings may be a bit more colorful all of a sudden. The geniuses we have gathered here are no ordinary intellects. They are extraordinary minds who may or may not have been totally high when they wrote these tweets. But it doesn't matter because these tweets are brilliant.

You might want to sit down for these. They will make you question everything you ever knew to be true.

Of course, this makes total sense. Why didn't I think of this earlier? It's absolutely perfect.

i wonder if caterpillars know that they’re going to be butterflies or do they just build the cocoon n be like wtf am i doing
— s̾p̾i̾c̾y̾ (@s̾p̾i̾c̾y̾)1528058498.0

This is such a good question. Could you imagine coming out of a deep sleep a totally different creature with beautiful wings who can all of a sudden fly? I would be so confused.

OK, well, the answer to this one is obvious. It's because we only use it on one tooth. Hold up. We don't? Do we use it on all our teeth? Oh man, I have some brushing to do.

Dude, I have thought about this so many times. What if my red is your green but we both accept what we know as red because we've never seen it differently?!

Honestly, this would be a relief. I just hope that when that person wakes up, the world ends instantly and without pain.

I love this so much. I don't think it's accurate at all, but that doesn't matter.

The eyes of dogs

To the eyes of a dog they must think us humans are immortal as they age and get old whilst we appear virtually the same. #Showerthoughts
— Showerthoughts (@Showerthoughts)1536999604.0

Woah! I wonder what my dog is thinking all the time, but I never realized this. That's so crazy.

Guys, time is wild. It's crazy to fathom how long our planet has been around and to think of all the amazing creatures who once populated it. My mind is blown!

Seriously, who was this? That must have been one brave (or dumb) person. "Ooh, a tiny tiger! I bet it won't do anything to me!"

Brushing your teeth is the only time you clean your skeleton #showerthoughts
— Jess Jeans (@Jess Jeans)1494518441.0

There are a couple of deep thoughts about our teeth, and I suppose it's because that brushing one's teeth can be a very relaxing, reflective act. But yeah, you're brushing bone.

This is a real chicken or the egg scenario, and honestly, I don't know which came first! Who picked this made up word?!

If I had a nickel for every strange pronunciation discrepancy in the English language, I would have enough money to move to a country with a language that makes more sense.

Living in the past

It takes our brains 80 milliseconds to process information, so we are technically living in the past.
— Akhlaq Ahmed (@Akhlaq Ahmed)1494181392.0

This is great. When someone says to you, "Be cool. Stop living in the past, man," you can now confidently shout back, "That's impossible!" and continue obsessing.

We take it for granted today, but a single Dorito has more extreme nacho flavor than a peasant in the 1400s would get in his whole lifetime.
— Matt Crowley (@Matt Crowley)1436911569.0

Isn't it sad to realize that peasants in the 1400s never got to experience the salty, cheesy flavor of a nacho Dorito?

This is actually crazy to think about. Although, I would venture to say that most supermodels are like 65 percent legs.

Hm. Interesting. The word "hyphenated" isn't actually hyphenated, but the word "non-hyphenated" is. Please see the previous caption about the oddities of the English language.

If you're not recalling, Mike Wazowski is the character Billy Crytal plays in Monsters Inc. He's a round, green, one-eyed cyclops monster. This is a very valid question.

Isn't this crazy to think about? This makes me really appreciate historians. Without their work, we wouldn't know to think about things like this.

The phrase "tomato smoothie" made me throw up a little bit in my mouth. This is one of those "technically true but let's not" things.

They would look just like Kyle XY! From that hit ABC Family show, Kyle XY. Remember that? No? Just me?

There is no physical evidence to say that today is Tuesday, we all just have to trust that someone kept count since… https://t.co/lLHi6HhlbO
— Cᴾⁱˢᵗᵒˡ (@Cᴾⁱˢᵗᵒˡ)1523382501.0

Time, days of the week, months, and years... they're all just a construct. If you watched the first season of True Detective, you know that time is actually a flat circle.

Again, the English language is full of contradictions and any person who learns this language as their secondarylanguage is smarter than every native English speaker.

Good god toast is good, and I don't know who decided to cook it again, but I would like to find out so I can shake their hand.

Isn't this crazy? You know your parents your whole life, but they don't know you for all of theirs.

Well, this is sad. Of course, you'd have to pet your rock for so many years that you would die before it eroded completely, so there's some silver lining.

This is the ultimate "why" question. I mean, intellectually, I guess I know why, but in my heart, it doesn't make much sense.

Each and every day

Cherish each and every day, because you never know when someone with your exact same name will become super famous and ruin your life.
— Chris Kelly (@Chris Kelly)1462569527.0

This is some really good advice. Share this with someone to blow their mind!